Moses Saw The FORM Of GOD, WHO Is CHRIST, Before HIS Coming In The Form Of Man

1Miriam and Aaron began to talk against Moses because of his Cushite wife, for he had married a Cushite.

2“Has The LORD Spoken only through Moses?” they asked. “Hasn’t HE Also Spoken Through us?”

And The LORD heard this.

3(Now Moses was a very humble man, more humble than anyone else on the face of the earth.)

4At once The LORD Said To Moses, Aaron and Miriam,


“Come out to the tent of meeting, all three of you.” So the three of them went out. 5Then The LORD Came Down in a pillar of cloud; HE Stood at the entrance to the tent and summoned Aaron and Miriam. When the two of them stepped forward,

“Listen to MY WORDS:

“When there is a prophet among you,

I, The LORD, Reveal MYSELF to them in visions,

I Speak To them in dreams.

7But this is not true of MY servant Moses;

he is faithful in all MY House.

8With him I Speak Face To Face,

clearly and not in riddles;

he sees The Form of The LORD.

Why then were you not afraid

to speak against MY servant Moses?”

9The Anger of The LORD Burned Against them, and

10When the cloud lifted from above the tent, Miriam’s skin was leprousa —it became as white as snow.

Aaron turned toward her and saw that she had a defiling skin disease, 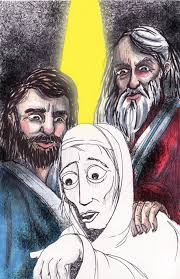 11and he said to Moses, “Please, my lord, I ask you not to hold against us the sin we have so foolishly committed. 12Do not let her be like a stillborn infant coming from its mother’s womb with its flesh half eaten away.”

13So Moses cried out to The LORD,

14The LORD Replied to Moses,

“If her father had spit in her face, would she not have

been in disgrace for seven days? Confine her outside

the camp for seven days; after that she can be

15So Miriam was confined outside the camp for seven days, and the people did not move on till she was brought back.

16After that, the people left Hazeroth and encamped in the Desert of Paran.

The patience of Moses was tried in his own family, as well as by the people. The pretense was, that he had married a foreign wife; but probably their pride was hurt, and their envy stirred up, by his superior authority. Opposition from our near relations, and from religious friends, is most painful.

Miriam, as a prophetess (compare Exodus 15:20-21) no less than as the sister of Moses and Aaron, took the first rank among the women of Israel; and Aaron may be regarded as the ecclesiastical head of the whole nation. But instead of being grateful for these high dignities they challenged the special vocation of Moses and the exclusive authority which GOD Had Assigned to him.

The Ethiopian woman whom he had married - (Hebrew, "Cushite," compare Genesis 2:13; Genesis 10:6).  It is likely that Zipporah Exodus 2:21 was dead, and that Miriam in consequence expected to have greater influence than ever with Moses. Her disappointment at his second marriage would consequently be very great.

It will be well if in such circumstances we can preserve the gentleness and meekness of Moses. Moses was thus fitted to the work he was called to.


GOD Not Only Cleared Moses, But Praised him.

Moses had The SPIRIT of Prophecy in a way which set him far above all other prophets; yet he that is least in the Kingdom of Heaven, is greater than he; and our LORD JESUS infinitely Excels him, Hebrews 3:1.


Let Miriam and Aaron consider whom it was they insulted. We have reason to be afraid of saying or doing anything against the servants of GOD. The removal of GOD's Presence is the surest and saddest token of GOD'S Displeasure. Woe to us, If HE Departs! But HE Never Departs until by sin and folly we drive HIM from us.

The cloud departed and Miriam became leprous. When GOD Goes, evil comes: expect no good when GOD Departs. But if she was thus punished for speaking against Moses, what will become of those who sin against CHRIST? Aaron, who joined his sister in speaking against Moses, is to beseech him, and to speak highly of him whom he had so lately blamed.


Moses made it appear, that he forgave the injury done him. To this pattern of Moses, and that of our SAVIOR WHO Said, FATHER, Forgive them, we must conform. A reason is given for Miriam's being put out of the camp for seven days because thus she ought to accept the punishment of her sin.


This hindered the people's progress in their march forward towards Canaan. Many things oppose us but nothing so hinders us in the way to Heaven, as sin

To JEHOVAH our MOST HOLY GOD.