CHRIST IS Our City Of Refuge To Flee From Destruction 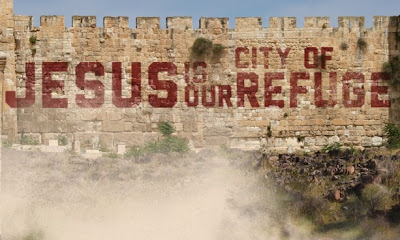 1 Then The LORD Said To Joshua:

2“Tell the Israelites to designate the cities of refuge, As I Instructed you through Moses, 3so that anyone who kills a person accidentally and unintentionally may flee there and find protection from the avenger of blood. 4When they flee to one of these cities, they are to stand in the entrance of the city gate and state their case before the elders of that city. Then the elders are to admit the fugitive into their city and provide a place to live among them. 5If the avenger of blood comes in pursuit, the elders must not surrender the fugitive, because the fugitive killed their neighbor unintentionally and without malice aforethought. 6They are to stay in that city until they have stood trial before the assembly and until the death of the high priest who is serving at that time. Then they may go back to their own home in the town from which they fled.” 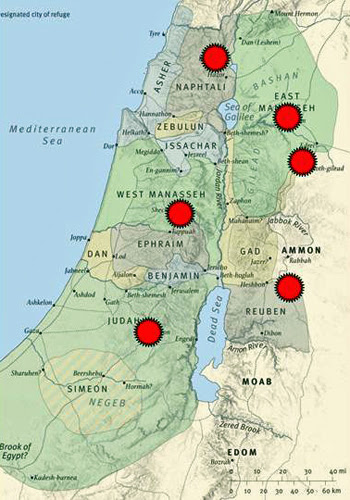 What were the Cities of Refuge in the Old Testament?

The cities of refuge were part of the distribution of the Promised Land among the twelve tribes of Israel. Only one tribe, the Levites, was not given land to develop. Instead, they were to be the priests of The LORD and the overseers of the tabernacle and all its rites and furnishings. Only the Levites could carry and set up the tabernacle (Numbers 2:5-13).

As the Levites were to have no territorial domain allocated to them like the other tribes on the conquest of Canaan, they were to be distributed throughout the land in certain cities appropriated to their use. Part of their inheritance consisted of forty-eight cities spread throughout the land (Numbers 35:6-7).


Of these forty-eight cities, six were designated as cities of refuge. The cities were Kedesh, Shechem, Hebron, Bezer, Romath, and Golan (Joshua 20:7-8).

The Mosaic Law stated that anyone who committed a murder was to be put to death (Exodus 21:14). But for unintentional deaths, GOD Set Aside these cities to which the murderer could flee for refuge (Exodus 21:13). He would be safe from the avenger—the family member charged with avenging the victim’s death (Numbers 35:19)—until the case could go to trial. The congregation would judge to find if the attacker acted unintentionally. If he did, he would return to the city of refuge and live there safely until the death of the high priest who was in office at the time of the trial, at which point he could return to his property. If the attacker left the city of refuge before the death of the high priest, however, the avenger would have the right to kill him (Numbers 35:24-28).

The establishment of those privileged sanctuaries among the cities of the Levites is probably traceable to the idea that the Levites would be the most suitable and impartial judges, that their presence and counsels might calm or restrain the stormy passions of the blood avenger. By their consecration as priests, the Levites were mediators between the Israelites and GOD. As such, they would have been gifted to calmly mediate between the attacker and the victim’s family, ensuring that no further bloodshed would occur.

CHRIST is our City of Refuge

The cities of refuge are types of CHRIST, In WHOM sinners find a refuge from the destroyer of our souls. Just as the guilty person sought refuge in the cities set up for that purpose, in the same way we flee To CHRIST for refuge from sin (Hebrews 6:18). We run To CHRIST to escape the danger we are in from the curse and condemnation of the Law, from of the Wrath of GOD, and from an eternity in hell. Only CHRIST Provides refuge from these things, and it is To HIM ALONE that we must run. Just as the cities were open to all who fled to them for safety, it is CHRIST WHO Provides safety to all who come To HIM for refuge from sin and its punishment.