1David went to Nob, to Ahimelek the priest. Ahimelek trembled when he met him, and asked, “Why are you alone? Why is no one with you?”

2David answered Ahimelek the priest, “The king sent me on a mission and said to me, ‘No one is to know anything about the mission I am sending you on.’ As for my men, I have told them to meet me at a certain place. 3Now then, what do you have on hand? Give me five loaves of bread, or whatever you can find.”

4But the priest answered David, “I don’t have any ordinary bread on hand; however, there is some consecrated bread here—provided the men have kept themselves from women.”

5David replied, “Indeed women have been kept from us, as usual whenevera I set out. The men’s bodies are holy even on missions that are not holy. How much more so today!” 6So the priest gave him the consecrated bread, since there was no bread there except the bread of the Presence that had been removed from Before The LORD and replaced by hot bread on the day it was taken away. 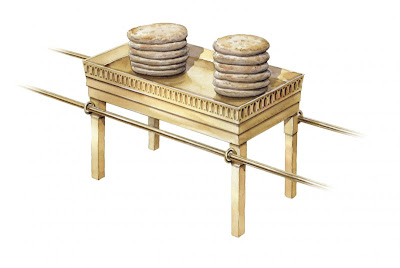 7Now one of Saul’s servants was there that day, detained Before The LORD; he was Doeg the Edomite, Saul’s chief shepherd.

8David asked Ahimelek, “Don’t you have a spear or a sword here? I haven’t brought my sword or any other weapon, because the king’s mission was urgent.”

9The priest replied, “The sword of Goliath the Philistine, whom you killed in the Valley of Elah, is here; it is wrapped in a cloth behind the ephod. If you want it, take it; there is no sword here but that one.”

David said, “There is none like it; give it to me.”

10That day David fled from Saul and went to Achish king of Gath. 11But the servants of Achish said to him, “Isn’t this David, the king of the land? Isn’t he the one they sing about in their dances:

“ ‘Saul has slain his thousands,
and David his tens of thousands’?”

12David took these words to heart and was very much afraid of Achish king of Gath. 13So he pretended to be insane in their presence; and while he was in their hands he acted like a madman, making marks on the doors of the gate and letting saliva run down his beard. 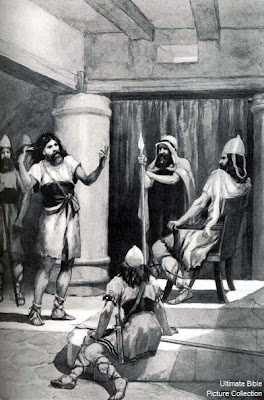 14Achish said to his servants, “Look at the man! He is insane! Why bring him to me? 15Am I so short of madmen that you have to bring this fellow here to carry on like this in front of me? Must this man come into my house?”

Nob, a city of the priests (1Samuel 22:19), was in the neighborhood of Jerusalem, on the Mount of Olives—a little north of the top, and on the northeast of the city. It is computed to have been about five miles distant from Gibeah. Ahimelech, the same as Ahiah, or perhaps his brother, both being sons of Ahitub (compare 1Samuel 14:3, with 1Samuel 22:4-11, 20).

His object in fleeing to this place was partly for the supply of his necessities, and partly for comfort and counsel, in the prospect of leaving the kingdom. Ahimelech was afraid at the meeting of David, suspecting some extraordinary occurrence by his appearing so suddenly, and in such a style, for his attendants were left at a little distance.

The king has commanded me a business, and has said to me, Let no man know - This was a direct falsehood, extorted through fear. David probably supposed, like many other persons, that a lie is quite excusable which is told for the sole purpose of saving the speaker's life. But what is essentially sinful, can never, from circumstances, change its immoral character; and David had to repent of this vice of lying (Psalm 119:29).

David and his men eat the Consecrated Bread

There would be plenty of bread in his house; but there was no time to wait for it. "The hallowed bread" was the old show-bread, which had been removed the previous day, and which was reserved for the use of the priests alone (Leviticus 24:9). Before entertaining the idea that this bread could be lawfully given to David and his men, the high priest seems to have consulted the oracle (1 Samuel 22:10) as to the course to be followed in this emergency.

A dispensation to use the hallowed bread was specially Granted By GOD HIMSELF.


And HE Said To them, "Have you never read what David did when he was in need and he and his companions became hungry; how he entered the House of GOD in the time of Abiathar the high priest, and ate the consecrated bread, which is not lawful for anyone to eat except the priests, and he also gave it to those who were with him?"

JESUS Said To them,


"The Sabbath was made for man, and not man for the Sabbath.”