Achish Sends David Back to Ziklag 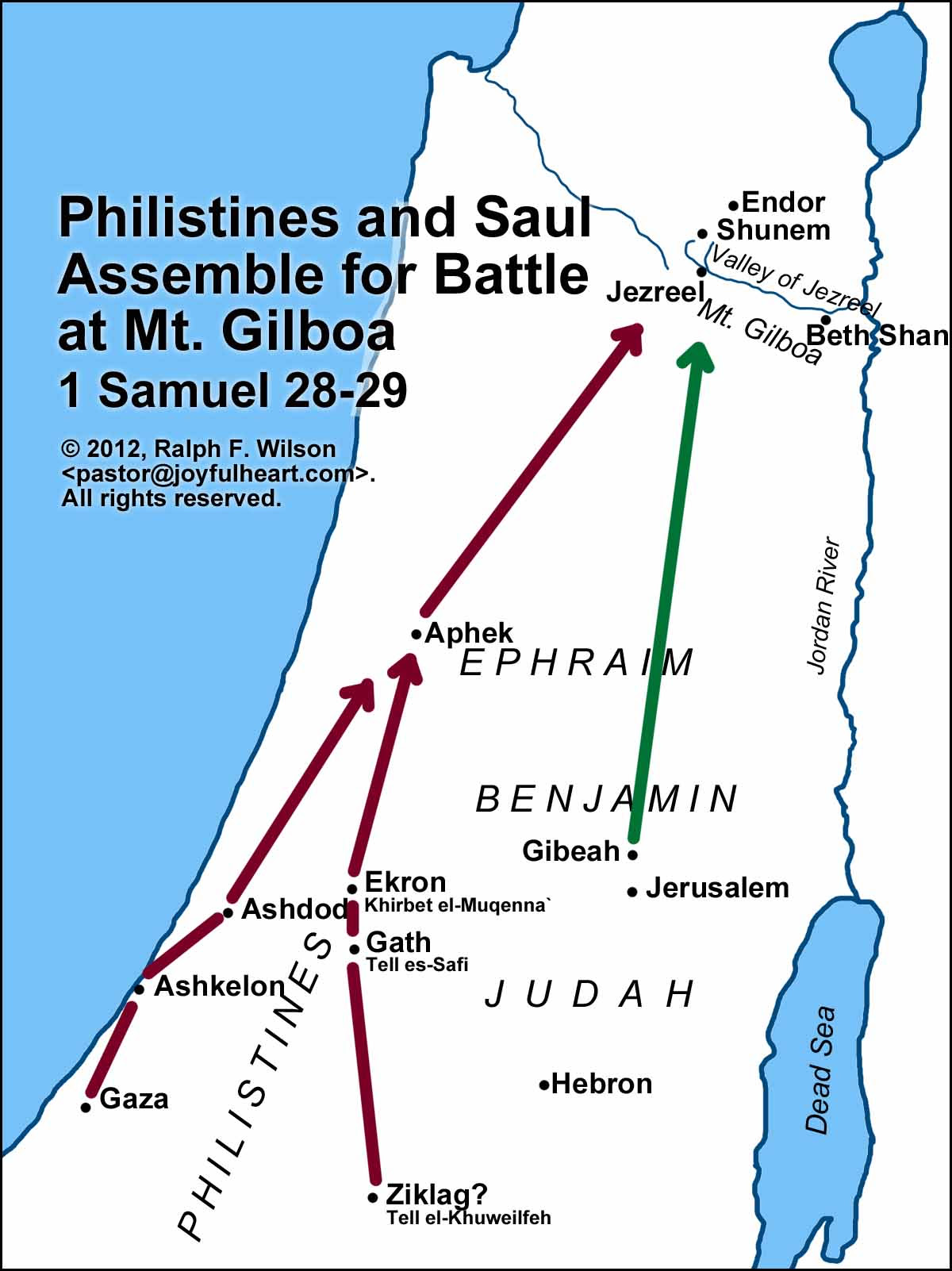 1The Philistines gathered all their forces at Aphek, and Israel camped by the spring in Jezreel. 2As the Philistine rulers marched with their units of hundreds and thousands, David and his men were marching at the rear with Achish. 3The commanders of the Philistines asked, “What about these Hebrews?”

Achish replied, “Is this not David, who was an officer of Saul king of Israel? He has already been with me for over a year, and from the day he left Saul until now, I have found no fault in him.”

4But the Philistine commanders were angry with Achish and said, “Send the man back, that he may return to the place you assigned him. He must not go with us into battle, or he will turn against us during the fighting. How better could he regain his master’s favor than by taking the heads of our own men? 5Isn’t this the David they sang about in their dances:

“ ‘Saul has slain his thousands,
and David his tens of thousands’?”

6So Achish called David and said to him, “As Surely As The LORD Lives, you have been reliable, and I would be pleased to have you serve with me in the army. From the day you came to me until today, I have found no fault in you, but the rulers don’t approve of you. 7Now turn back and go in peace; do nothing to displease the Philistine rulers.”

8“But what have I done?” asked David. “What have you found against your servant from the day I came to you until now? Why can’t I go and fight against the enemies of my lord the king?”

9Achish answered, “I know that you have been as pleasing in my eyes as an angel of GOD; nevertheless, the Philistine commanders have said, ‘He must not go up with us into battle.’ 10Now get up early, along with your master’s servants who have come with you, and leave in the morning as soon as it is light.”

The clue to this may be found in 1 Chronicles 12:19-21, where it appears that a considerable number of Manassites "defected" to David just at this time, and went back with him to Ziklag.

Some of the tribe of Manasseh defected to David when he went with the Philistines to fight against Saul. (He and his men did not help the Philistines because, after consultation, their rulers sent him away. They said, “It will cost us our heads if he deserts to his master Saul.”)

It is therefore to these new comers that Achish applies the expression. It is impossible not to recognize here a merciful interposition of Providence, by which David was not only saved from fighting against his king and country, but sent home just in time to recover his wives and property from the Amalekites.


David and his men reached Ziklag on the third day. Now the Amalekites had raided the Negev and Ziklag. They had attacked Ziklag and burned it, and had taken captive the women and everyone else in it, both young and old. They killed none of them, but carried them off as they went on their way.