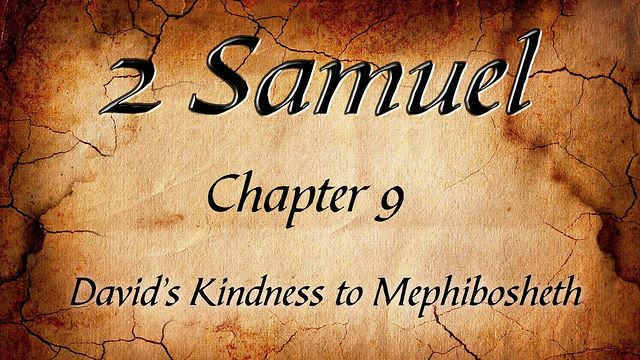 1David asked, “Is there anyone still left of the house of Saul to whom I can show kindness for Jonathan’s sake?”

2Now there was a servant of Saul’s household named Ziba. They summoned him to appear before David, and the king said to him, “Are you Ziba?”

“At your service,” he replied.

3The king asked, “Is there no one still alive from the house of Saul to whom I can show GOD’S Kindness?” 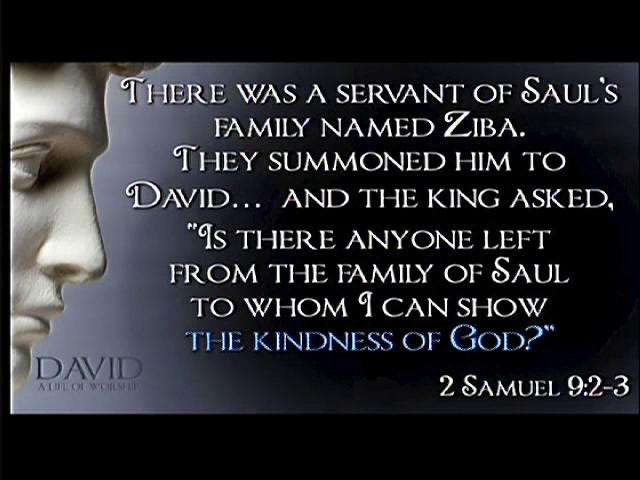 Ziba answered the king, “There is still a son of Jonathan; he is lame in both feet.”

Ziba answered, “He is at the house of Makir son of Ammiel in Lo Debar.”

5So King David had him brought from Lo Debar, from the house of Makir son of Ammiel.

6When Mephibosheth son of Jonathan, the son of Saul, came to David, he bowed down to pay him honor.

“At your service,” he replied.

7“Don’t be afraid,” David said to him, “for I will surely show you kindness for the sake of your father Jonathan. I will restore to you all the land that belonged to your grandfather Saul, and you will always eat at my table.”

8Mephibosheth bowed down and said, “What is your servant, that you should notice a dead dog like me?” 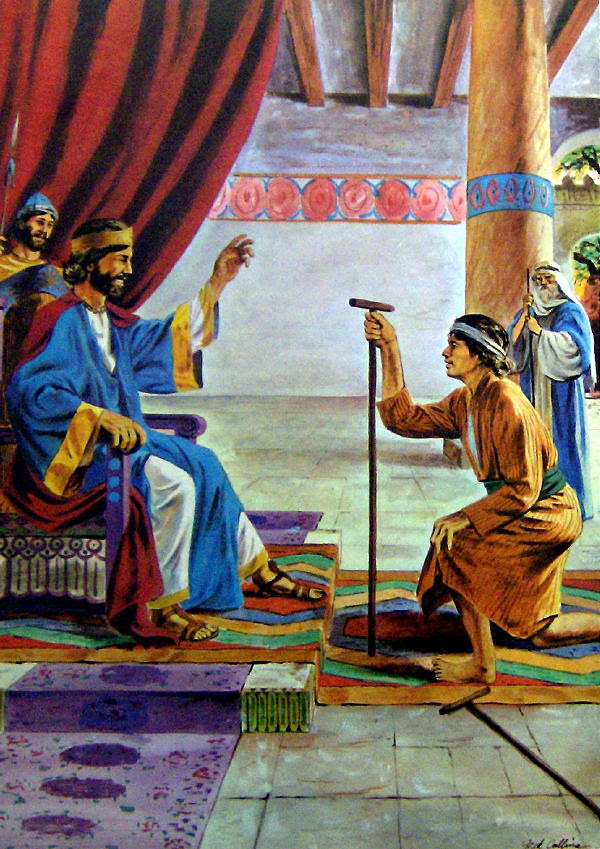 9Then the king summoned Ziba, Saul’s steward, and said to him, “I have given your master’s grandson everything that belonged to Saul and his family. 10You and your sons and your servants are to farm the land for him and bring in the crops, so that your master’s grandson may be provided for. And Mephibosheth, grandson of your master, will always eat at my table.” (Now Ziba had fifteen sons and twenty servants.)

11Then Ziba said to the king, “Your servant will do whatever my lord the king commands his servant to do.” So Mephibosheth ate at David’sa table like one of the king’s sons.

12Mephibosheth had a young son named Mika, and all the members of Ziba’s household were servants of Mephibosheth. 13And Mephibosheth lived in Jerusalem, because he always ate at the king’s table; he was lame in both feet.


Is there yet any that is left of the house of Saul? which question was put by him, not in order to destroy them, lest they should disturb his government, as was usual with other princes, and especially such who got their crowns by usurpation; but to prevent any suspicion of that kind in the persons he inquired of, he adds:


that I may show him kindness, for Jonathan's sake? Not for Saul's sake, who had been his implacable enemy, though he had sworn to him that he would not cut off his seed; but for Jonathan's sake, his dear friend, whose memory was precious to him. Some of the Jewish writers have thought, because this follows upon the account given of the officers of David, both in his camp and court, that this question was occasioned by a thought that came into his mind, while he was appointing officers, that if there were any of Saul's family, and especially any descendant of Jonathan, that was fit for any post or office, he would put him into one; but this seems to be a long time after David had settled men in his chief offices; for Mephibosheth, after an inquiry found out, was but five years of age when his father was slain, and so but twelve when David was made king over all Israel, and yet now he was married, and had a young son, 2 Samuel 9:12; so that it was a long time after David was established in the kingdom that he thought of this; which is due to his being engaged so much in war, and having such a multiplicity of business on his hands.