1In the course of time, Amnon son of David fell in love with Tamar, the beautiful sister of Absalom son of David.

2Amnon became so obsessed with his sister Tamar that he made himself ill. She was a virgin, and it seemed impossible for him to do anything to her.

3Now Amnon had an adviser named Jonadab son of Shimeah, David’s brother. Jonadab was a very shrewd man. 4He asked Amnon, “Why do you, the king’s son, look so haggard morning after morning? Won’t you tell me?”

Amnon said to him, “I’m in love with Tamar, my brother Absalom’s sister.”

5“Go to bed and pretend to be ill,” Jonadab said. “When your father comes to see you, say to him, ‘I would like my sister Tamar to come and give me something to eat. Let her prepare the food in my sight so I may watch her and then eat it from her hand.’ ”

6So Amnon lay down and pretended to be ill. When the king came to see him, Amnon said to him, “I would like my sister Tamar to come and make some special bread in my sight, so I may eat from her hand.”

7David sent word to Tamar at the palace: “Go to the house of your brother Amnon and prepare some food for him.” 8So Tamar went to the house of her brother Amnon, who was lying down. She took some dough, kneaded it, made the bread in his sight and baked it. 9Then she took the pan and served him the bread, but he refused to eat.

“Send everyone out of here,” Amnon said. So everyone left him. 10Then Amnon said to Tamar, “Bring the food here into my bedroom so I may eat from your hand.” And Tamar took the bread she had prepared and brought it to her brother Amnon in his bedroom. 11But when she took it to him to eat, he grabbed her and said, “Come to bed with me, my sister.”

12“No, my brother!” she said to him. “Don’t force me! Such a thing should not be done in Israel! Don’t do this wicked thing. 13What about me? Where could I get rid of my disgrace? And what about you? You would be like one of the wicked fools in Israel. Please speak to the king; he will not keep me from being married to you.” 14But he refused to listen to her, and since he was stronger than she, he raped her.

15Then Amnon hated her with intense hatred. In fact, he hated her more than he had loved her. Amnon said to her, “Get up and get out!”

16“No!” she said to him. “Sending me away would be a greater wrong than what you have already done to me.”

But he refused to listen to her. 17He called his personal servant and said, “Get this woman out of my sight and bolt the door after her.” 18So his servant put her out and bolted the door after her. She was wearing an ornatea robe, for this was the kind of garment the virgin daughters of the king wore. 19Tamar put ashes on her head and tore the ornate robe she was wearing. She put her hands on her head and went away, weeping aloud as she went. 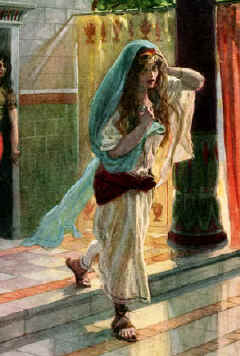 21When King David heard all this, he was furious. 22And Absalom never said a word to Amnon, either good or bad; he hated Amnon because he had disgraced his sister Tamar.

23Two years later, when Absalom’s sheepshearers were at Baal Hazor near the border of Ephraim, he invited all the king’s sons to come there. 24Absalom went to the king and said, “Your servant has had shearers come. Will the king and his attendants please join me?”

25“No, my son,” the king replied. “All of us should not go; we would only be a burden to you.” Although Absalom urged him, he still refused to go but gave him his blessing.

26Then Absalom said, “If not, please let my brother Amnon come with us.”

The king asked him, “Why should he go with you?” 27But Absalom urged him, so he sent with him Amnon and the rest of the king’s sons.

28Absalom ordered his men, “Listen! When Amnon is in high spirits from drinking wine and I say to you, ‘Strike Amnon down,’ then kill him. Don’t be afraid. Haven’t I given you this order? Be strong and brave.” 29So Absalom’s men did to Amnon what Absalom had ordered. Then all the king’s sons got up, mounted their mules and fled.

30While they were on their way, the report came to David: “Absalom has struck down all the king’s sons; not one of them is left.” 31The king stood up, tore his clothes and lay down on the ground; and all his attendants stood by with their clothes torn.

32But Jonadab son of Shimeah, David’s brother, said, “My lord should not think that they killed all the princes; only Amnon is dead. This has been Absalom’s express intention ever since the day Amnon raped his sister Tamar. 33My lord the king should not be concerned about the report that all the king’s sons are dead. Only Amnon is dead.”

35Jonadab said to the king, “See, the king’s sons have come; it has happened just as your servant said.”

36As he finished speaking, the king’s sons came in, wailing loudly. The king, too, and all his attendants wept very bitterly.

37Absalom fled and went to Talmai son of Ammihud, the king of Geshur. But King David mourned many days for his son.

38After Absalom fled and went to Geshur, he stayed there three years. 39And King David longed to go to Absalom, for he was consoled concerning Amnon’s death.

Ｅｖｅｒｙｏｎｅ must have been struck by the remarkable fact that while David was so admirable as a governor of a kingdom, he was so unsuccessful as a ruler of his own house.

1. First of all, in accounting for the troubles of his house, we have again to notice his plurality of wives - a sure source not only of domestic trouble, but of ungodliness too. The training of the young, and all the more since the Fall, is attended with very great difficulties; and unless father and mother be united, visibly united, in affection, in judgment, and in piety, the difficulty of raising a godly seed is very greatly increased. In David's house there must have been sad confusion. There could have been no happy and harmonious co-operation between father and mother in training the children.

2. Further, David's own example, in certain respects, was another cause of the ill-ordered state of his family. A parent may have a hundred good qualities, and but very few bad, but the risk of his children adopting the bad is much greater than the likelihood of their copying the good. The bent of their fallen nature inclines them to the one; only Divine Grace can draw them to the other. The character of David was singularly rich in fine qualities, but it was also marked by a few flaring defects. One was, proneness to animal indulgence; another, the occasional absence of straightforwardness. These were the very defects which his children copied.

3. A third cause of David's failure in the government of his family was the excessive, even morbid tenderness of his feelings towards his children - especially some of them. Perhaps a fourth reason may be added for David's ill success in his family - though of this there is less positive proof than of the rest - he may have thought of his family circle as too exclusively a scene for relaxation and enjoyment - he may have forgot that even there is a call for much vigilance and self-denial. Men much harassed with public business and care are prone to this error. In truth, there is no recreation in absolute idleness, and no happiness in neglect of duty. True recreation lies not in idleness, but in change of employment, and true happiness is found not in neglecting duty, but in its performance.