Get Rid of Idols in Your House and in Your Heart


The Danites Settle in Laish


1 In those days Israel had no king.

And in those days the tribe of the Danites was seeking a place of their own where they might settle, because they had not yet come into an inheritance among the tribes of Israel. 2So the Danites sent five of their leading men from Zorah and Eshtaol to spy out the land and explore it. These men represented all the Danites. They told them, “Go, explore the land.” 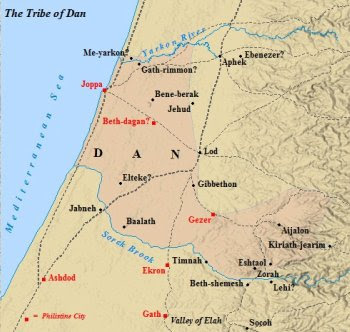 So they entered the hill country of Ephraim and came to the house of Micah, where they spent the night. 3When they were near Micah’s house, they recognized the voice of the young Levite; so they turned in there and asked him, “Who brought you here? What are you doing in this place? Why are you here?”

4He told them what Micah had done for him, and said, “He has hired me and I am his priest.”

5Then they said to him, “Please inquire of GOD to learn whether our journey will be successful.”

6The priest answered them, “Go in peace. Your journey has The LORD'S Approval.”

7So the five men left and came to Laish, where they saw that the people were living in safety, like the Sidonians, at peace and secure. And since their land lacked nothing, they were prosperous.a Also, they lived a long way from the Sidonians and had no relationship with anyone else.b

8When they returned to Zorah and Eshtaol, their fellow Danites asked them, “How did you find things?”

9They answered, “Come on, let’s attack them! We have seen the land, and it is very good. Aren’t you going to do something? Don’t hesitate to go there and take it over. 10When you get there, you will find an unsuspecting people and a spacious land that GOD Has Put into your hands, a land that lacks nothing whatever.”

11Then six hundred men of the Danites, armed for battle, set out from Zorah and Eshtaol. 12On their way they set up camp near Kiriath Jearim in Judah. This is why the place west of Kiriath Jearim is called Mahaneh Dan to this day. 13From there they went on to the hill country of Ephraim and came to Micah’s house.

18When the five men went into Micah’s house and took the idol, the ephod and the household gods, the priest said to them, “What are you doing?”

19They answered him, “Be quiet! Don’t say a word. Come with us, and be our father and priest. Isn’t it better that you serve a tribe and clan in Israel as priest rather than just one man’s household?” 20The priest was very pleased. He took the ephod, the household gods and the idol and went along with the people.21Putting their little children, their livestock and their possessions in front of them, they turned away and left.

22When they had gone some distance from Micah’s house, the men who lived near Micah were called together and overtook the Danites. 23As they shouted after them, the Danites turned and said to Micah, “What’s the matter with you that you called out your men to fight?”

24He replied, “You took the gods I made, and my priest, and went away. What else do I have? How can you ask, ‘What’s the matter with you?’ ”

25The Danites answered, “Don’t argue with us, or some of the men may get angry and attack you, and you and your family will lose your lives.” 26So the Danites went their way, and Micah, seeing that they were too strong for him, turned around and went back home.

27Then they took what Micah had made, and his priest, and went on to Laish, against a people at peace and secure. They attacked them with the sword and burned down their city. 28There was no one to rescue them because they lived a long way from Sidon and had no relationship with anyone else. The city was in a valley near Beth Rehob.

The Danites rebuilt the city and settled there. 29They named it Dan after their ancestor Dan, who was born to Israel—though the city used to be called Laish.

30 There the Danites set up for themselves the idol, and Jonathan son of Gershom, the son of Moses, and his sons were priests for the tribe of Dan until the time of the captivity of the land.

31 They continued to use the idol Micah had made, all the time the House of GOD Was in Shiloh.


From the beginning, GOD already Assigned the Danites a land of their own under the direction of Joshua (Joshua 19:51). However, the Danites did not like the land that GOD Assigned them so they decided to relocate to other places. When they came to Micah’s house, they asked the Levite for GOD’S Approval of their plan. The  Levite had no authority to approve the Danites’ plan because only the high priest at the worship place can give people real counsel From GOD. The Levite just simply says that GOD Is Pleased With their plan without knowing it is really hearing the Voice of GOD. The Danites too did not care much about that. If the Danites were serious about seeking GOD’S Plan, they would have travel up to the worship place to seek advice from the high priest.

2. The Danites coveted other lands instead of staying in the land GOD Assigned them earlier


Later that day, the Danites found the city of Laish and decided to conquer it because it was a city without protection. The neighboring cities were too far away so there is no chance that people will come and help defend Laish. Just like the Danites many Christians often don’t have patience in waiting For GOD’S Will. It is wrong to covet what other people have. We must learn to be satisfied and happy with what we already have. Good Christians are not materialistic. We should not covet to have lots of possessions such as large house, expensive car and etc if we cannot afford them. Even then, we should strive to always live a simple life and not be materialistic.

3. Micah is so far away From GOD that he felt he has nothing left after the idols were stolen


While the Danites were on their way to conquer Laish, the 5 spies told other men that there was a man that kept golden idols and a priest at his house. After listening to the advice of the 5 spies, the men turned into the road that leads to Micah’s house. They stole Micah’s idols and quickly leave. The Danites did not worship The LORD as their only GOD. They also worship other foreign gods. The priest also followed the Danites because they offer him to be priest for the whole tribe. Micah was sad upon learning that his idols were stolen. Micah thought that his god is the idol so he felt that he has nothing left when they had taken away them. The household gods are man-made and cannot protect themselves. But it seems as though Micah is trying to protect his household god. Micah was already far From GOD and did not have a fellowship with him so he felt like he had nothing else left.

4. Keeping idols in the house open doorways to the devil


It is wrong to keep idols in the house. Satan can possess any physical object including the idols. After you become a new born Christian, you must get rid of every single idolatry objects even if you are not worshiping it. Keeping idols in the house open a doorway for Satan and the demons to enter into your life.

In their new city Dan, and very probably had a house built for it, peculiar to it, in the same place where Jeroboam, in later times, set up one of his golden calves. The Danites having succeeded, according to the oracle in Micah's house, they had a very great veneration for the images they brought away with them from thence, and set them up for religious worship in a proper place; for though only mention is made of the graven image, yet no doubt the molten image, and the teraphim, with the ephod, were all placed together for devotion and consultation.

Jonathan the son of Gershom, the son of Moses, he and his sons were priests to the tribe of Dan

Not to the whole tribe, but to that part of it which resided in this city, called Dan; and this Jonathan seems to be no other than the Levite Micah took into his house, and made a priest of; and whom the Danites took with them to Laish, to be their priest, who is said to be the son of Gershom, the son of Manasseh: now Gershom was the son of Moses, and this man is thought by some to be a grandson of his; and with this agrees the time in which he lived, for as Phinehas the grandson of Aaron was now living, Judges 20:28, so might be a grandson of Moses; and though he is called a young man, he might be a younger son of Gershom; nor is his being a Levite any objection, since it is a clear case that Moses made no provision for his family.

And it is remarkable that the "nun", or "N" in Manasseh, is suspended over the other letters in our printed copies of the Hebrew Bible, and so without it may be read, Moses; and the Jews have thought that this was done for the honor of Moses, though it may be that another Gershom than the son of Moses.

Until the day of the captivity of the land; not till the captivity of Sennacherib or Salmaneser, when Dan, with the rest of the ten tribes, were carried captives for this idolatry, and these idolatrous priests, can hardly be thought to be continued here through the times of Samuel, David, and Solomon since it is clear, by the next verse, that this idolatry continued all the time the House of GOD Was at Shiloh; and which directs us to the captivity here spoken of, when the Ark was carried captive by the Philistines, and the House of Shiloh was forsaken,  which is the sense and may be illustrated and confirmed by some passages in;


“They angered GOD by building shrines to other gods; they made HIM jealous with their idols.”