JESUS Is Called "WONDERFUL, COUNSELOR, The MIGHTY GOD, The EVERLASTING FATHER, The PRINCE of Peace"


The Birth of Samson

1Again the Israelites did evil in the Eyes of The LORD, so The LORD Delivered them into the hands of the Philistines for forty years.

2A certain man of Zorah, named Manoah, from the clan of the Danites, had a wife who was childless, unable to give birth.

3The ANGEL of The LORD Appeared To her and Said,

“You are barren and childless, but you are going to become pregnant and give birth to a son. 4Now see to it that you drink no wine or other fermented drink and that you do not eat anything unclean. 5You will become pregnant and have a son whose head is never to be touched by a razor because the boy is to be a Nazirite, dedicated To GOD from the womb. He will take the lead in delivering Israel from the hands of the Philistines.”

6Then the woman went to her husband and told him,


“A Man of GOD Came To me. HE Looked like An ANGEL of GOD, Very Awesome. I didn’t ask HIM Where HE Came from, and HE Didn’t Tell me HIS Name.

‘You will become pregnant and have a son. Now then,

drink no wine or other fermented drink and do not eat

anything unclean, because the boy will be a Nazirite

of GOD from the womb until the day of his death.’ ” 8Then Manoah prayed To The LORD: “Pardon your servant, LORD. I beg you to let the man of GOD YOU Sent to us come again To Teach us how to bring up the boy who is to be born.”

9GOD Heard Manoah, and The ANGEL of GOD Came Again To the woman while she was out in the field; but her husband Manoah was not with her. 10The woman hurried to tell her husband, “He’s here! The Man WHO Appeared To me the other day!”

11Manoah got up and followed his wife. When he came to the Man, he said, “Are YOU the Man WHO Talked To my wife?”

12So Manoah asked HIM, “When your words are fulfilled, what is to be the rule that governs the boy’s life and work?”

13The ANGEL of The LORD Answered,

“Your wife must do all that I have told her. 14She must not eat anything that comes from the grapevine, nor drink any wine or other fermented drink nor eat anything unclean. She must do everything I Have Commanded her.”


15Manoah said to The ANGEL of The LORD, “We would like you to stay until we prepare a young goat for you.”

16The ANGEL of The LORD Replied,

“Even though you detain ME, I Will Not Eat any of your food. But if you prepare a burnt offering, offer it To The LORD.”

(Manoah did not realize that it was The ANGEL of The LORD.)

17Then Manoah inquired of The ANGEL of The LORD, “What Is Your Name, so that we may honor YOU When YOUR WORD Comes True?”

“Why do you ask MY Name?

It is beyond understanding.”

19Then Manoah took a young goat, together with the grain offering, and sacrificed it on a rock To The LORD. And The LORD Did an amazing thing while Manoah and his wife watched:

20As the flame blazed up from the altar toward heaven, The ANGEL of The LORD Ascended in the flame. Seeing this, Manoah and his wife fell with their faces to the ground. 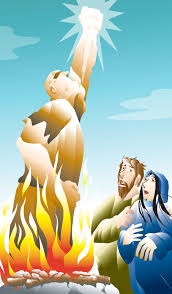 23But his wife answered, “If The LORD Had Meant To Kill us, HE Would Not Have Accepted a burnt offering and grain offering from our hands, nor shown us all these things or now told us this.”


24The woman gave birth to a boy and named him Samson. He grew and The LORD Blessed him, 25And The SPIRIT of The LORD Began To stir him while he was in Mahaneh Dan, between Zorah and Eshtaol.


Who Was The ANGEL of JEHOVAH in this chapter?

One of CHRIST’S Names Is ‘WONDERFUL’. HIS Name Was long a secret, but by the Gospel it is brought to light: JESUS A SAVIOR.


“For unto us a Child Is Born, unto us A SON Is Given: and the Government shall be upon HIS Shoulder: and HIS Name shall be called WONDERFUL, COUNSELOR, The MIGHTY GOD, The EVERLASTING FATHER, The PRINCE of Peace.”