Joshua’s Farewell Address To The Leaders


Joshua’s Farewell to the Leaders

1After a long time had passed and The LORD Had Given Israel rest from all their enemies around them, Joshua, by then a very old man,2summoned all Israel—their elders, leaders, judges and officials—and said to them: “I am very old. 3You yourselves have seen everything The LORD your GOD Has Done to all these nations for your sake; it was The LORD your GOD WHO Fought for you. 4Remember how I have allotted as an inheritance for your tribes all the land of the nations that remain—the nations I conquered—between the Jordan and the Mediterranean Sea in the west. 5The LORD your GOD HIMSELF Will Push them Out for your sake. HE Will Drive them Out before you, and you will take possession of their land, as The LORD your GOD Promised you.

6“Be very strong; be careful to obey all that is written in the Book of the Law of Moses, without turning aside to the right or to the left.

7Do not associate with these nations that remain among you; do not invoke the names of their gods or swear by them. You must not serve them or bow down to them. 8But you are to hold fast to The LORD your GOD, as you have until now.

9“The LORD Has Driven Out before you great and powerful nations; to this day no one has been able to withstand you. 10One of you routs a thousand, Because The LORD your GOD Fights For you, Just As HE Promised. 11So be very careful to love The LORD your GOD.

12“But if you turn away and ally yourselves with the survivors of these nations that remain among you and if you intermarry with them and associate with them, 13then you may be sure that The LORD your GOD Will no longer Drive Out these nations before you. Instead, they will become snares and traps for you, whips on your backs and thorns in your eyes, until you perish from this good land, which The LORD your GOD Has Given you.

14“Now I am about to go the way of all the earth. You know with all your heart and soul that not one of all the Good Promises The LORD your GOD Gave you Has Failed. Every Promise Has Been Fulfilled; not one has failed. 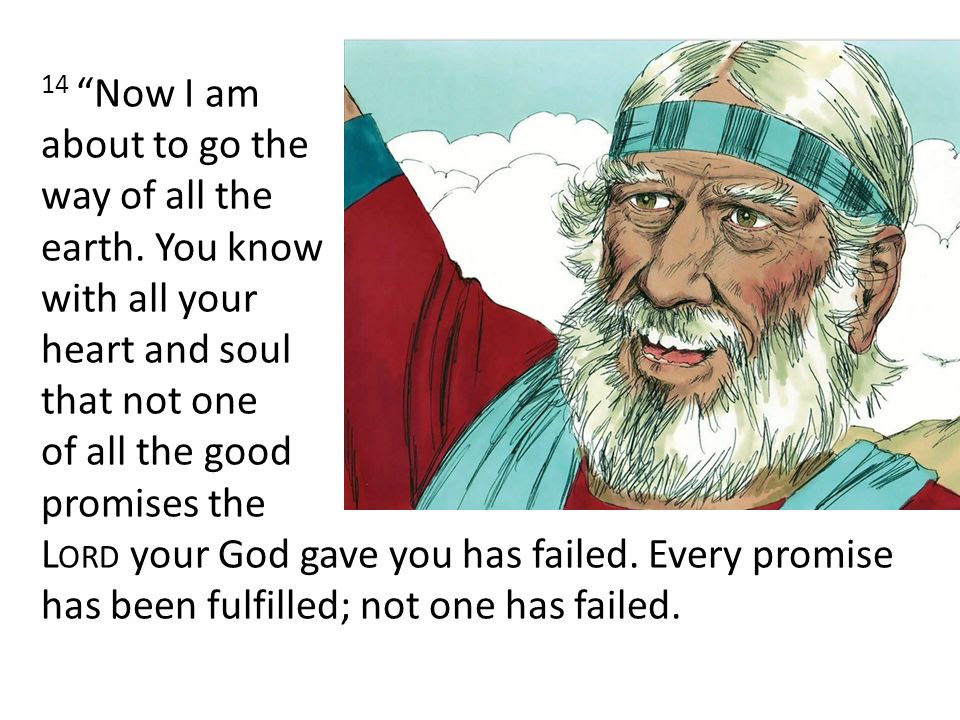 This and the next chapter contain the last addresses of Joshua. These addresses were no doubt among the closing acts of Joshua's life, but were evidently given on different occasions, and are of different character and scope.

In the former Joshua briefly reminds all leaders of Israel of the recent benefits of GOD toward them and their people, declares that GOD Had Fulfilled all HIS Promises, and exhorts to faithfulness on their side to GOD that so HIS Mercies May Not Be Withdrawn: in the latter he takes a wider range, rehearses the gracious dealings of GOD with the nation from its very origin, and upon these as his grounds, he claims for GOD their sincere and entire service.


But he grants them the option of withdrawing from the Covenant if they so choose; and when they elect still to abide by it, it is solemnly renewed by the free consent of the whole people. Joshua's reproofs and warnings are in sum and substance identical with those with which Moses closed his career (Deuteronomy 31, etc.).