Saul Became A Murderer of His Own Life

1Now the Philistines fought against Israel; the Israelites fled before them, and many fell dead on Mount Gilboa. 2The Philistines were in hot pursuit of Saul and his sons, and they killed his sons Jonathan, Abinadab and Malki-Shua. 3The fighting grew fierce around Saul, and when the archers overtook him, they wounded him critically.

4Saul said to his armor-bearer,

But his armor-bearer was terrified and would not do it; so Saul took his own sword and fell on it. 5When the armor-bearer saw that Saul was dead, he too fell on his sword and died with him. 6So Saul and his three sons and his armor-bearer and all his men died together that same day.

7When the Israelites along the valley and those across the Jordan saw that the Israelite army had fled and that Saul and his sons had died, they abandoned their towns and fled. And the Philistines came and occupied them.

8The next day, when the Philistines came to strip the dead, they found Saul and his three sons fallen on Mount Gilboa. 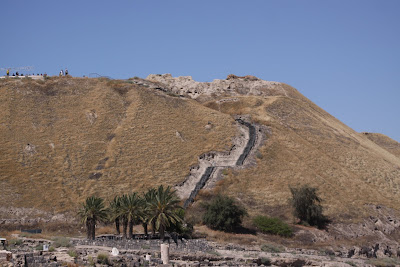 9 They cut off his head and stripped off his armor, and they sent messengers throughout the land of the Philistines to proclaim the news in the temple of their idols and among their people. 10 They put his armor in the temple of the Ashtoreths and fastened his body to the wall of Beth Shan.

11When the people of Jabesh Gilead heard what the Philistines had done to Saul, 12all their valiant men marched through the night to Beth Shan. They took down the bodies of Saul and his sons from the wall of Beth Shan and went to Jabesh, where they burned them. 13Then they took their bones and buried them under a tamarisk tree at Jabesh, and they fasted seven days.


We cannot judge of the spiritual or eternal state of any by the manner of their death; for in that, there is one event to the righteous and to the wicked. Saul, when sorely wounded, and unable to resist or to flee, expressed no concern about his never-dying soul; but only desired that the Philistines might not insult over him, or put him to pain, and he became his own murderer.

As it is the grand deceit of the devil, to persuade sinners, under great difficulties, to fly to this last act of desperation, it is well to fortify the mind against it, by a serious consideration of its sinfulness Before GOD, and its miserable consequences in society. But our security is not in ourselves. Let us seek protection from Him WHO Keeps us to the end of the ages. Let us watch and pray; and wear the whole armor of GOD that we may be able to withstand in the evil day, and having done all, to stand.

The Scripture makes no mention what became of the souls of Saul and his sons, after they were dead; but of their bodies only: secret things belong not to us. It is of little consequence by what means we die, or what is done with our dead bodies. If our souls and spirits are saved, our bodies will be raised incorruptible and glorious; but not to fear HIS Wrath, WHO Is Able To Destroy both body and soul in hell.

While pompous funerals, grand monuments, and the praises of men, honor the memory of the deceased, the soul may be suffering in the regions of darkness and despair!

Let us seek that honor which comes from GOD only, whether

we live or die.