1The LORD Sent Nathan to David. When he came to him, he said,

“There were two men in a certain town, one rich and the other poor. 2The rich man had a very large number of sheep and cattle, 3but the poor man had nothing except one little ewe lamb he had bought. He raised it, and it grew up with him and his children. It shared his food, drank from his cup and even slept in his arms. It was like a daughter to him.

5David burned with anger against the man and said to Nathan,


“As Surely As The LORD Lives, the man who did this

6He must pay for that lamb four times over, because he

did such a thing and had no pity.”

7Then Nathan said to David,

“You are the man! 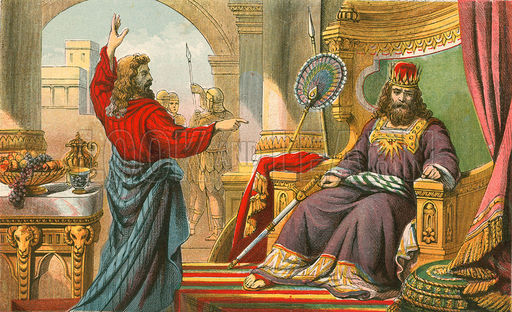 This Is What The LORD, The GOD of Israel, Says:

‘I Anointed you king over Israel, and I Delivered you from the hand of Saul. 8I Gave your master’s house to you, and your master’s wives into your arms. I Gave you all Israel and Judah. And if all this had been too little, I Would Have Given you even more. 9Why did you despise The WORD of The LORD by doing what is evil in HIS Eyes? You struck down Uriah the Hittite with the sword and took his wife to be your own. You killed him with the sword of the Ammonites. 10Now, therefore, the sword will never depart from your house, because you despised ME and took the wife of Uriah the Hittite to be your own.’

11“This Is What The LORD Says:


‘Out of your own household I AM Going To Bring

calamity on you. Before your very eyes I Will Take

your wives and Give them to one who is close to you,

and he will sleep with your wives in broad daylight.

12 You did it in secret, but I Will Do this thing in broad

daylight before all Israel.’ ”

13Then David said to Nathan,


“I have sinned against The LORD.”


“The LORD Has Taken Away your sin. You are not going to die. 14But because by doing this you have shown utter contempt for The LORD, the son born to you will die.”


15After Nathan had gone home, The LORD Struck the child that Uriah’s wife had borne to David, and he became ill. 16David pleaded with GOD for the child. He fasted and spent the nights lying in sackclothb on the ground. 17The elders of his household stood beside him to get him up from the ground, but he refused, and he would not eat any food with them.

18On the seventh day the child died. David’s attendants were afraid to tell him that the child was dead, for they thought, “While the child was still living, he wouldn’t listen to us when we spoke to him. How can we now tell him the child is dead? He may do something desperate.”

19David noticed that his attendants were whispering among themselves, and he realized the child was dead. “Is the child dead?” he asked.

20Then David got up from the ground. After he had washed, put on lotions and changed his clothes, he went into The House of The LORD and worshiped. Then he went to his own house, and at his request they served him food, and he ate.

21His attendants asked him, “Why are you acting this way? While the child was alive, you fasted and wept, but now that the child is dead, you get up and eat!”

22He answered, “While the child was still alive, I fasted and wept. I thought, ‘Who knows? The LORD May Be Gracious To me and let the child live.’ 23But now that he is dead, why should I go on fasting? Can I bring him back again? I will go to him, but he will not return to me.”

24Then David comforted his wife Bathsheba, and he went to her and made love to her. She gave birth to a son, and they named him Solomon.

29So David mustered the entire army and went to Rabbah, and attacked and captured it. 30David took the crown from their king’sd head, and it was placed on his own head. It weighed a talente of gold, and it was set with precious stones. David took a great quantity of plunder from the city 31and brought out the people who were there, consigning them to labor with saws and with iron picks and axes, and he made them work at brickmaking.f David did this to all the Ammonite towns. Then he and his entire army returned to Jerusalem.

Nathan said to David, You are the man - These awful words pierced his heart, aroused his conscience, and brought him to his knees. The sincerity and depth of his penitent sorrow are evinced by the Psalms he composed (Psalm 32:1-11; 51:1-19; 103:1-22).

He was pardoned, so far as related to the restoration of the Divine Favor. But as from his high character for piety, and his eminent rank in society, his deplorable fall was calculated to do great injury to the cause of religion, it was necessary that GOD Should Testify His Abhorrence of sin by leaving even His Own servant to reap the bitter temporal fruits.

David was not himself doomed, according to his own view of what justice demanded (2 Samuel 12:5); but he had to suffer a quadruple expiation in the successive deaths of four sons, besides a lengthened train of other evils.


The name Jedediah comes from Yedidya, a Hebrew name meaning "Friend of GOD" or "Beloved of GOD". In the Bible, Jedidiah was the “blessing" name given by GOD through prophet Nathan, in infancy to Solomon, King David's second son by Bathsheba.