JESUS IS The KING Of kings

Adonijah Sets Himself Up as King

1When King David was very old, he could not keep warm even when they put covers over him. 2So his attendants said to him, “Let us look for a young virgin to serve the king and take care of him. She can lie beside him so that our lord the king may keep warm.”

3Then they searched throughout Israel for a beautiful young woman and found Abishag, a Shunammite, and brought her to the king. 4The woman was very beautiful; she took care of the king and waited on him, but the king had no sexual relations with her. 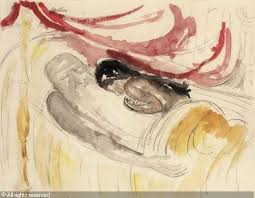 5Now Adonijah, whose mother was Haggith, put himself forward and said, “I will be king.” So he got chariots and horsesa ready, with fifty men to run ahead of him. 6(His father had never rebuked him by asking, “Why do you behave as you do?” He was also very handsome and was born next after Absalom.)

7Adonijah conferred with Joab son of Zeruiah and with Abiathar the priest, and they gave him their support. 8But Zadok the priest, Benaiah son of Jehoiada, Nathan the prophet, Shimei and Rei and David’s special guard did not join Adonijah.

9Adonijah then sacrificed sheep, cattle and fattened calves at the Stone of Zoheleth near En Rogel. He invited all his brothers, the king’s sons, and all the royal officials of Judah, 10but he did not invite Nathan the prophet or Benaiah or the special guard or his brother Solomon.

11Then Nathan asked Bathsheba, Solomon’s mother, “Have you not heard that Adonijah, the son of Haggith, has become king, and our lord David knows nothing about it? 12Now then, let me advise you how you can save your own life and the life of your son Solomon. 13Go in to King David and say to him, ‘My lord the king, did you not swear to me your servant: “Surely Solomon your son shall be king after me, and he will sit on my throne”? Why then has Adonijah become king?’ 14While you are still there talking to the king, I will come in and add my word to what you have said.”

15So Bathsheba went to see the aged king in his room, where Abishag the Shunammite was attending him. 16Bathsheba bowed down, prostrating herself before the king.

“What is it you want?” the king asked. 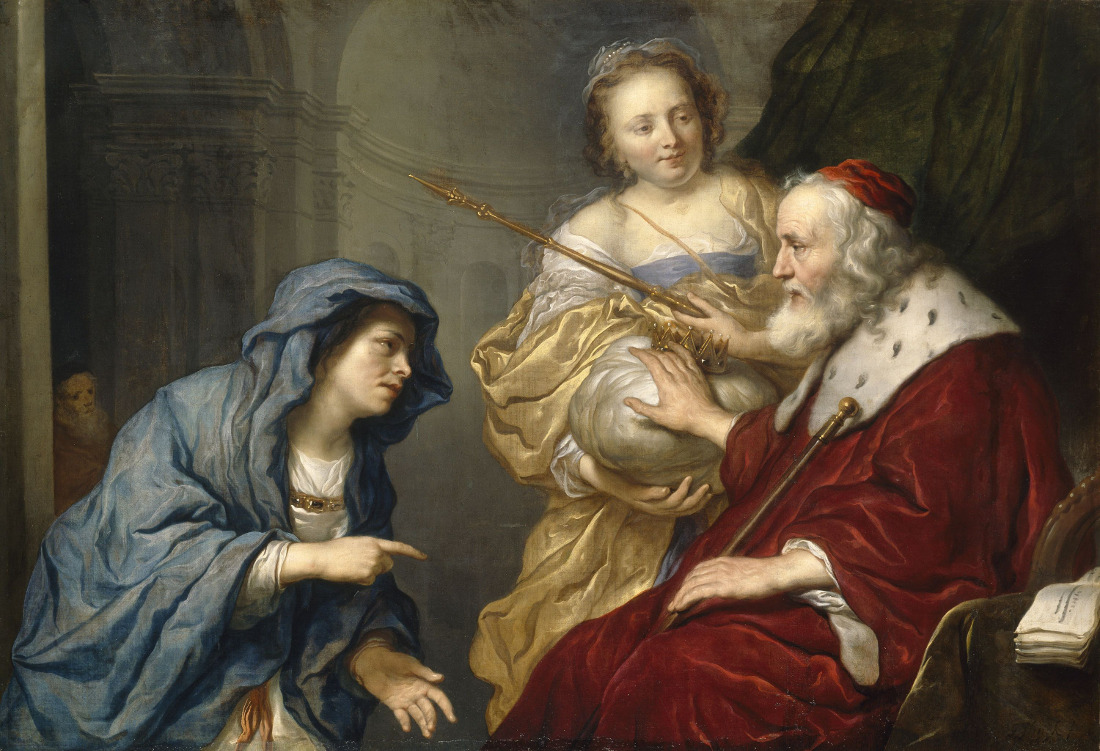 17She said to him, “My lord, you yourself swore to me your servant By The LORD your GOD: ‘Solomon your son shall be king after me, and he will sit on my throne.’ 18But now Adonijah has become king, and you, my lord the king, do not know about it. 19He has sacrificed great numbers of cattle, fattened calves, and sheep, and has invited all the king’s sons, Abiathar the priest and Joab the commander of the army, but he has not invited Solomon your servant. 20My lord the king, the eyes of all Israel are on you, to learn from you who will sit on the throne of my lord the king after him. 21Otherwise, as soon as my lord the king is laid to rest with his ancestors, I and my son Solomon will be treated as criminals.”

24Nathan said, “Have you, my lord the king, declared that Adonijah shall be king after you, and that he will sit on your throne? 25Today he has gone down and sacrificed great numbers of cattle, fattened calves, and sheep. He has invited all the king’s sons, the commanders of the army and Abiathar the priest. Right now they are eating and drinking with him and saying, ‘Long live King Adonijah!’ 26But me your servant, and Zadok the priest, and Benaiah son of Jehoiada, and your servant Solomon he did not invite. 27Is this something my lord the king has done without letting his servants know who should sit on the throne of my lord the king after him?”

28Then King David said, “Call in Bathsheba.” So she came into the king’s presence and stood before him.

29The king then took an oath: “As Surely As The LORD Lives, WHO Has Delivered me out of every trouble, 30I will surely carry out this very day what I swore to you By The LORD, The GOD of Israel: Solomon your son shall be king after me, and he will sit on my throne in my place.”

31Then Bathsheba bowed down with her face to the ground, prostrating herself before the king, and said, “May my lord King David live forever!”


35Then you are to go up with him, and he is to come and sit on my throne and reign in my place. I have appointed him ruler over Israel and Judah.”

38So Zadok the priest, Nathan the prophet, Benaiah son of Jehoiada, the Kerethites and the Pelethites went down and had Solomon mount King David’s mule, and they escorted him to Gihon. 39Zadok the priest took the horn of oil from the sacred tent and anointed Solomon. Then they sounded the trumpet and all the people shouted, “Long live King Solomon!” 40And all the people went up after him, playing pipes and rejoicing greatly, so that the ground shook with the sound. 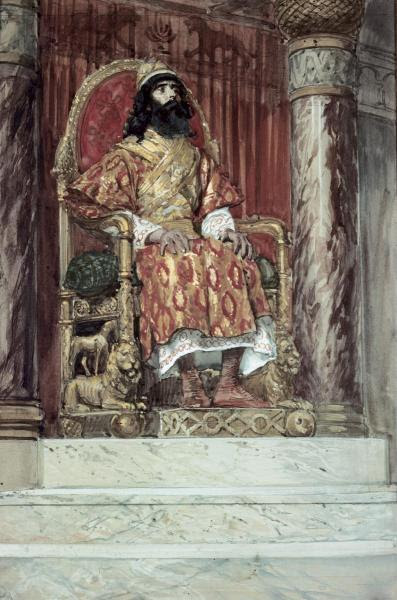 41Adonijah and all the guests who were with him heard it as they were finishing their feast. On hearing the sound of the trumpet, Joab asked, “What’s the meaning of all the noise in the city?”

42Even as he was speaking, Jonathan son of Abiathar the priest arrived. Adonijah said, “Come in. A worthy man like you must be bringing good news.”

43“Not at all!” Jonathan answered. “Our lord King David has made Solomon king. 44The king has sent with him Zadok the priest, Nathan the prophet, Benaiah son of Jehoiada, the Kerethites and the Pelethites, and they have put him on the king’s mule, 45and Zadok the priest and Nathan the prophet have anointed him king at Gihon. From there they have gone up cheering, and the city resounds with it. That’s the noise you hear. 46Moreover, Solomon has taken his seat on the royal throne.

47Also, the royal officials have come to congratulate our lord King David, saying, ‘May your GOD Make Solomon’s name more famous than yours and his throne greater than yours!’ And the king bowed in worship on his bed

‘Praise Be To The LORD, The GOD of Israel, WHO Has

Allowed my eyes to see a successor on my throne


49At this, all Adonijah’s guests rose in alarm and dispersed. 50But Adonijah, in fear of Solomon, went and took hold of the horns of the altar.

51Then Solomon was told, “Adonijah is afraid of King Solomon and is clinging to the horns of the altar. He says, ‘Let King Solomon swear to me today that he will not put his servant to death with the sword.’ ”

52Solomon replied, “If he shows himself to be worthy, not a hair of his head will fall to the ground; but if evil is found in him, he will die.” 53Then King Solomon sent men, and they brought him down from the altar. And Adonijah came and bowed down to King Solomon, and Solomon said, “Go to your home.”

We have David sinking under infirmities. He was chastised for his recent sins of numbering the Israelites (2 Samuel 24), and felt the effects of his former toils and hardships.

Observe Nathan's address to Bathsheba. Let me give you counsel how to save your own life, and the life of your son, Solomon. Such as this is the counsel CHRIST'S ministers give us in HIS Name, to give all diligence, not only that no man take our crown, Revelation 3:11, but that we save our lives, even the lives of our souls.

David made a solemn declaration of his firm cleaving to his former resolution, that Solomon should be his successor. Even the recollection of the distresses from which The LORD Redeemed him, Increased his comfort, Inspired his hopes, and Strengthened him to his duty, under the decays of nature and the approach of death.

The people expressed great joy and satisfaction in the elevation of Solomon. Every true Israelite rejoices in the exaltation of the Son of David. Combinations formed upon evil principles will soon be dissolved, when self-interest calls another way. How can those who do evil deeds expect to have good tidings? Adonijah had despised Solomon, and soon, in fear of Solomon, went and took hold of the horns of the altar.


We see here, as in a glass, JESUS, The Son of David and The SON of GOD, Exalted to the Throne of Glory, notwithstanding all HIS enemies. HIS Kingdom is far greater than that of HIS father David, and therein all the true people of GOD cordially rejoice. The prosperity of HIS Cause is vexation and terror to HIS enemies. No horns of the altar, nor forms of godliness, nor pretenses to religion, can profit those who will not submit to HIS Authority, and accept of HIS Salvation; and if their submission be hypocritical, they shall perish without remedy.