Saving Faith Comes From Listening To The WORD Of CHRIST


Woe to the Leaders of Ephraim and Judah

1Woe to that wreath, the pride of Ephraim’s drunkards,
to the fading flower, his glorious beauty,
set on the head of a fertile valley—
to that city, the pride of those laid low by wine!

2See, The LORD Has one who is powerful and strong.
Like a hailstorm and a destructive wind,
like a driving rain and a flooding downpour,
HE Will Throw it forcefully to the ground.
3That wreath, the pride of Ephraim’s drunkards,
will be trampled underfoot.
4That fading flower, his glorious beauty,
set on the head of a fertile valley,
will be like figs ripe before harvest—
as soon as people see them and take them in hand,
they swallow them.

5In that day The LORD ALMIGHTY
Will Be a Glorious Crown,
a Beautiful Wreath
for the remnant of HIS people.
6HE Will Be a SPIRIT of Justice
to the one who sits in judgment,
a Source of Strength
to those who turn back the battle at the gate.
7And these also stagger from wine
and reel from beer:
Priests and prophets stagger from beer
and are befuddled with wine;
they reel from beer,
they stagger when seeing visions,
they stumble when rendering decisions.
8All the tables are covered with vomit
and there is not a spot without filth.

9“Who is it he is trying to teach?
To whom is he explaining his message?
To children weaned from their milk,
to those just taken from the breast?


11Very well then, with foreign lips and strange tongues
GOD Will Speak to this people,

12to whom HE Said,
“This is the resting place, let the weary rest”;
and, “This is the place of repose”—
but they would not listen.

13So then, The WORD of The LORD to them Will Become:

Do this, do that,
a rule for this, a rule for that;
a little here, a little there—
so that as they go they will fall backward;
they will be injured and snared and captured.

14Therefore hear The WORD of The LORD, you scoffers
who rule this people in Jerusalem.
15You boast, “We have entered into a covenant with death,
with the realm of the dead we have made an agreement.
When an overwhelming scourge sweeps by,
it cannot touch us,
for we have made a lie our refuge
and falsehoodb our hiding place.”

16So This Is What The SOVEREIGN LORD Says:

“See, I lay a Stone in Zion, a Tested Stone,
a Precious Cornerstone for a Sure Foundation;
the one who relies on It
will never be stricken with panic. 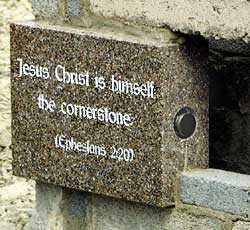 17I Will Make Justice the measuring line
and Righteousness the plumb line;
hail will sweep away your refuge, the lie,
and water will overflow your hiding place. 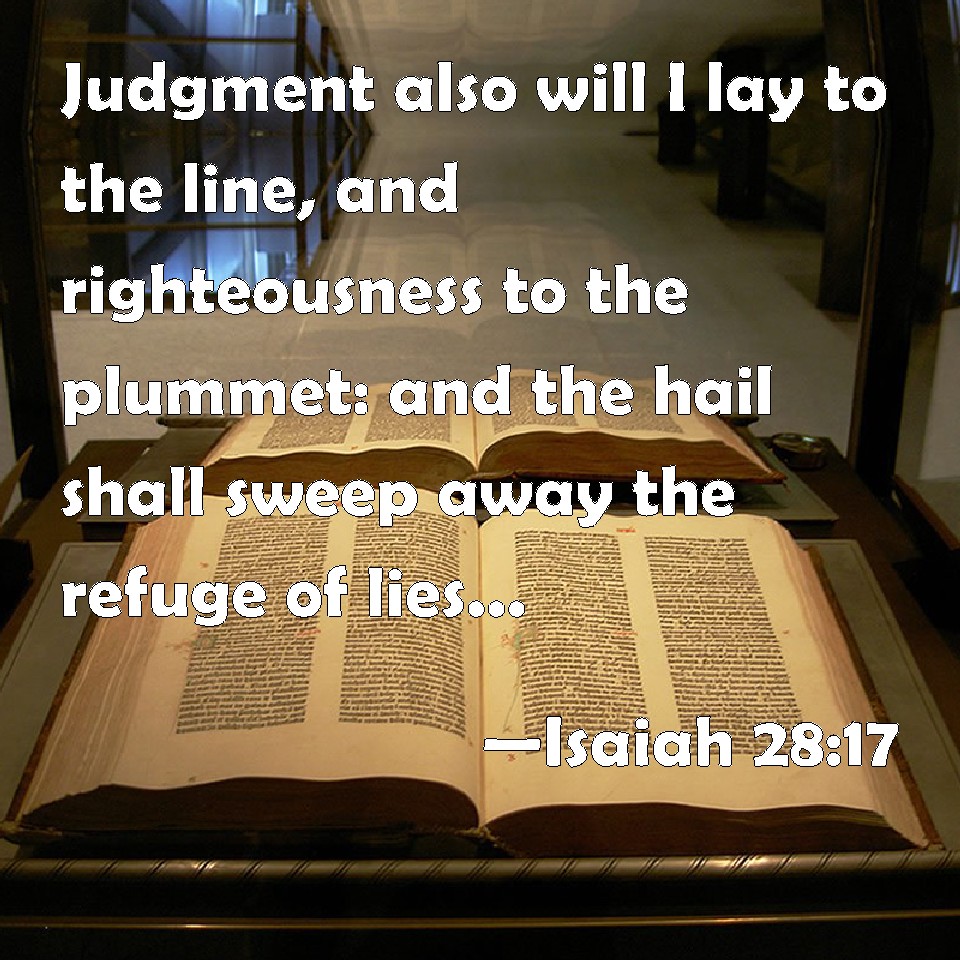 18Your covenant with death will be annulled;
your agreement with the realm of the dead will not stand.
When the overwhelming scourge sweeps by,
you will be beaten down by it.
19As often as it comes it will carry you away;
morning after morning, by day and by night,
it will sweep through.”
The understanding of this message
will bring sheer terror.
20The bed is too short to stretch out on,
the blanket too narrow to wrap around you.

21The Lord Will Rise Up As HE Did at Mount Perazim,
HE Will Rouse HIMSELF as in the Valley of Gibeon—
To Do HIS Work, HIS Strange Work,
and Perform HIS Task, HIS Alien Task.
22Now stop your mocking,
or your chains will become heavier;
The LORD, The LORD ALMIGHTY, Has Told me
of the destruction decreed against the whole land.

23Listen and hear MY Voice;

pay attention and hear What I Say. 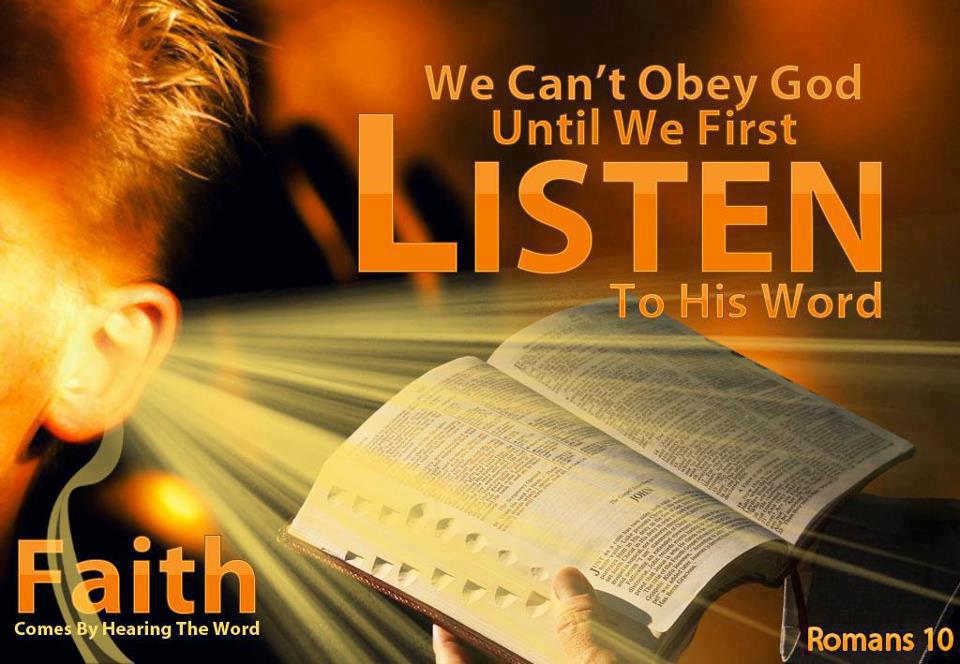 24When a farmer plows for planting, does he plow continually?
Does he keep on breaking up and working the soil?
25When he has leveled the surface,
does he not sow caraway and scatter cumin?
Does he not plant wheat in its place,c
barley in its plot,d
and spelt in its field?

26His GOD Instructs him
and Teaches him the right way. 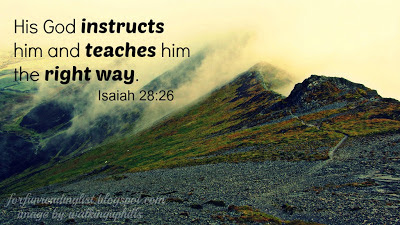 27Caraway is not threshed with a sledge,
nor is the wheel of a cart rolled over cumin;
caraway is beaten out with a rod,
and cumin with a stick.
28Grain must be ground to make bread;
so one does not go on threshing it forever.
The wheels of a threshing cart may be rolled over it,
but one does not use horses to grind grain.
29All this also comes from The LORD ALMIGHTY,
Whose Plan Is Wonderful,
Whose Wisdom Is Magnificent. 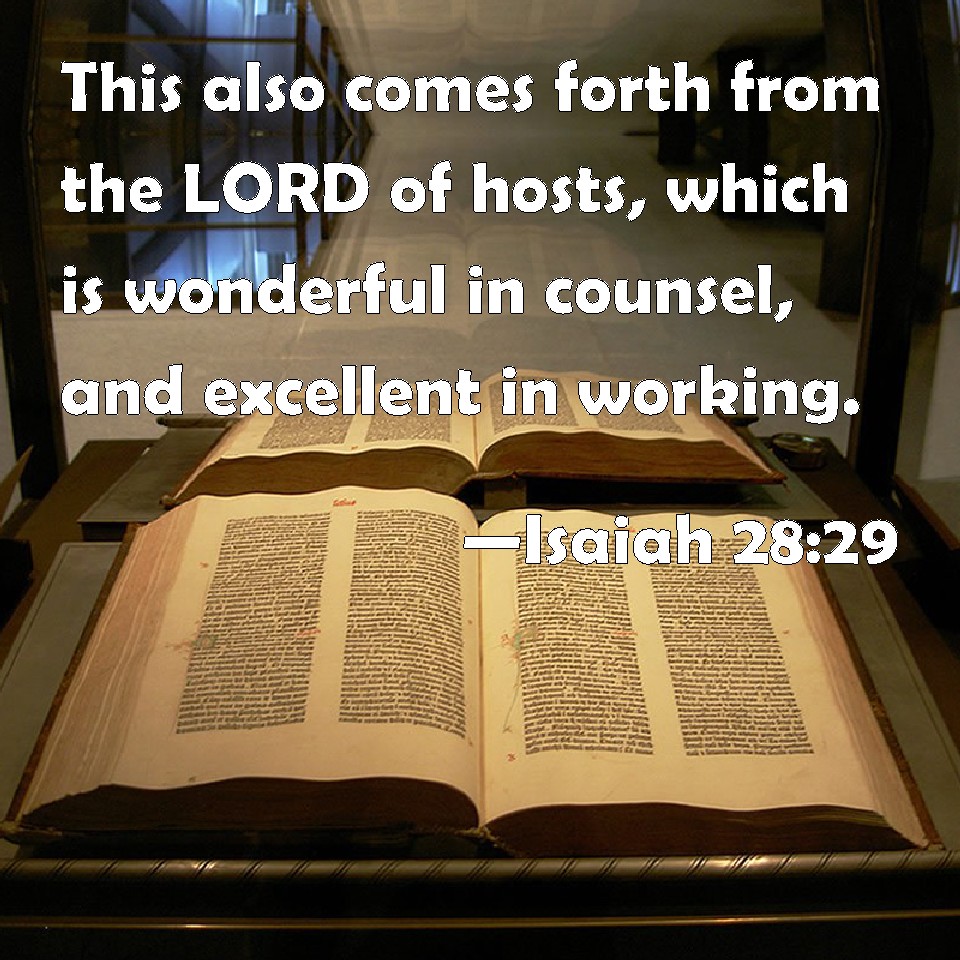 In this chapter the ten tribes of Israel and the two tribes of Judah and Benjamin, are threatened with Divine Judgments, because of their sins and iniquities mentioned. The ten tribes, under the name of Ephraim, for their pride and drunkenness, Isaiah 28:1 the means of their destruction, the Assyrian monarch, compared to a hail storm, and a flood of mighty waters, Isaiah 28:2 which destruction, for their sins, is repeated, and represented as sudden and swift; when they would be like a fading flower and hasty fruit, Isaiah 28:3

And then, as for the two tribes(Judah and Benjamin), though they had a glorious prince at the head of them, who had a spirit of wisdom and judgment for government, and of valor and courage for war, Isaiah 28:5 yet the generality of the people, led on by the example of priest and prophet, went into the same sensual gratifications as they of the ten tribes did, Isaiah 28:7 and became unteachable and were like children just taken from the breast, and to be used as such, Isaiah 28:9 and though the doctrine proposed to be taught them was such as, if received, would be of the greatest advantage to them, for their comfort and refreshment, yet it was refused by them with the utmost contempt; which was to be their ruin, Isaiah 28:12.

Therefore the rulers of Jerusalem are threatened with the Judgments of GOD, which should come upon them night and day, the report of which would be a vexation to them; and from which they should not be screened by their covenant with death and hell, or by their shelters and coverings with lies and falsehood, in which they placed their confidence, Isaiah 28:14 in the midst of which account, for the comfort of The LORD'S people, stands a glorious prophecy, concerning the sure foundation laid in Zion, on which all that are built are safe and happy, Isaiah 28:16 and the certainty of these Judgments is illustrated by the method which the ploughman takes in sowing his corn, and threshing it out; for which he has instruction and direction from The LORD of hosts, Isaiah 28:23.