The devil, old serpent, Will Be Slayed By The LORD JESUS

The LORD Will Punish with HIS Sword—

HIS Fierce, Great and Powerful Sword— 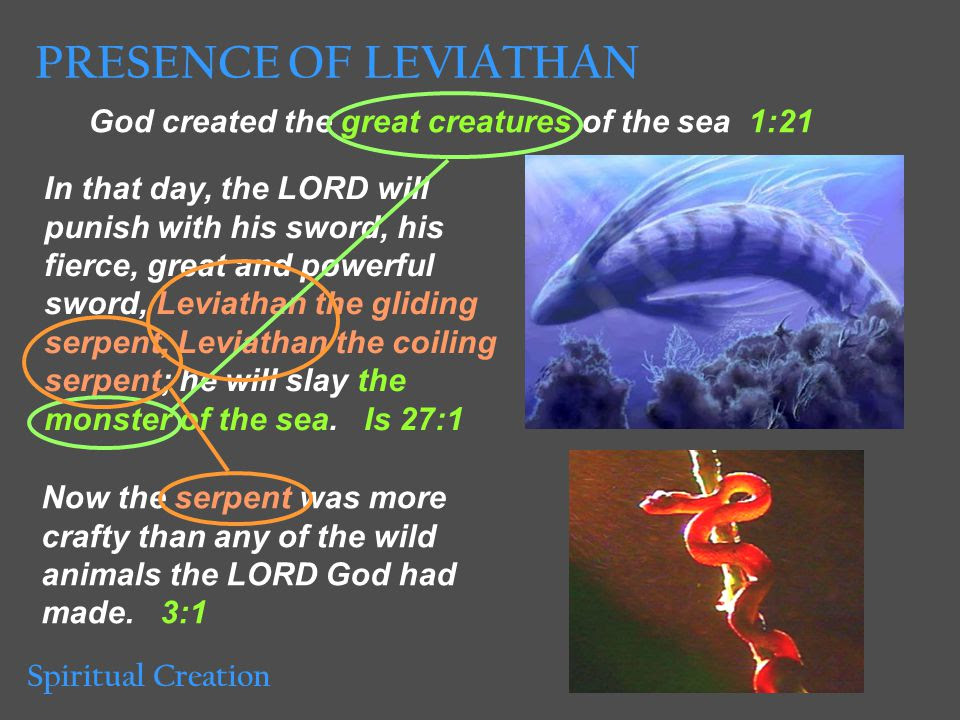 HE Will Slay the monster of the sea. 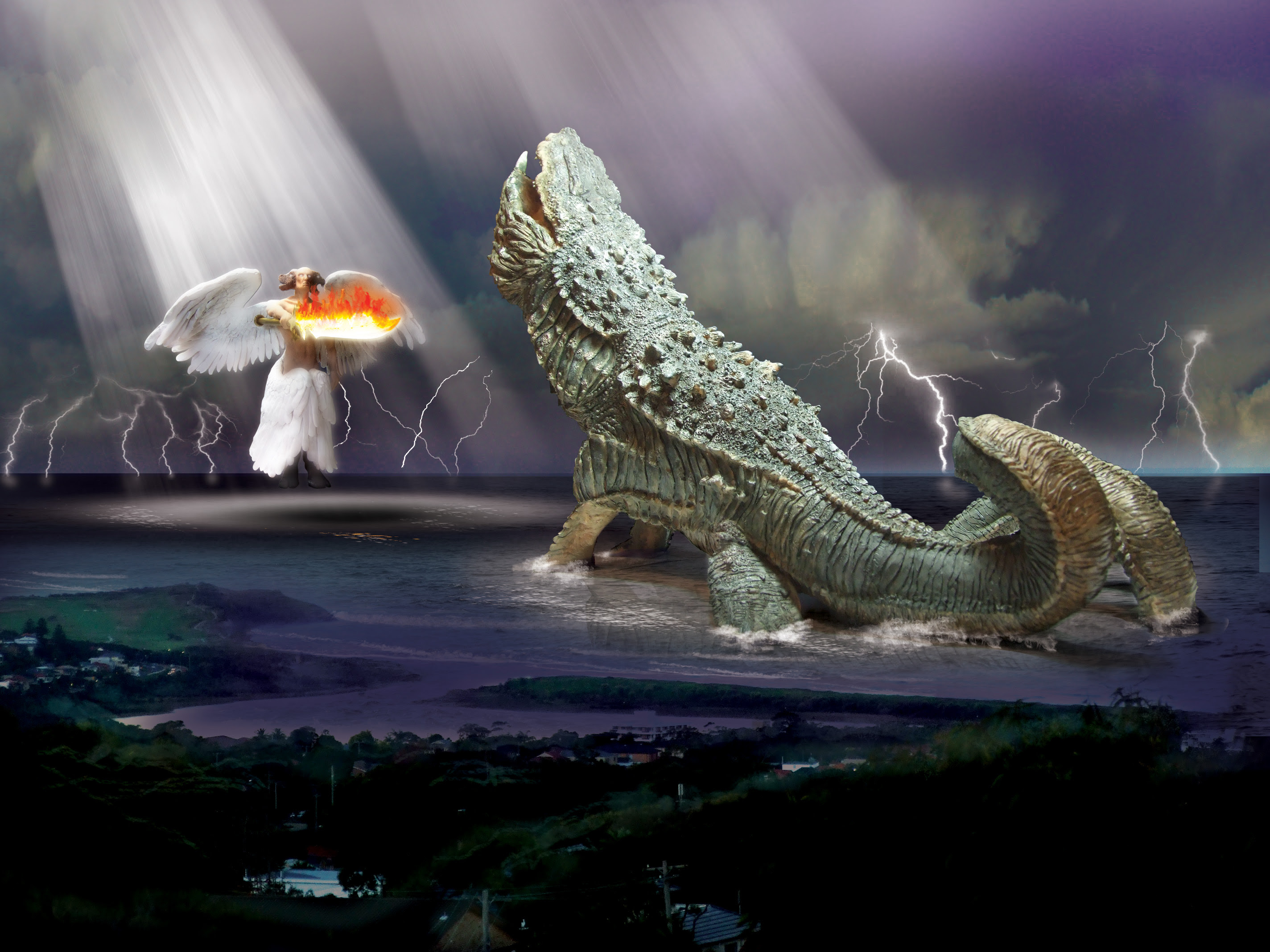 “Sing about a fruitful vineyard:
3I, The LORD, Watch Over it;
I Water it continually.
I Guard it day and night
so that no one may harm it. 4I AM Not Angry.
If only there were briers and thorns confronting ME!
I Would March Against them in battle;
I Would Set them all on fire. 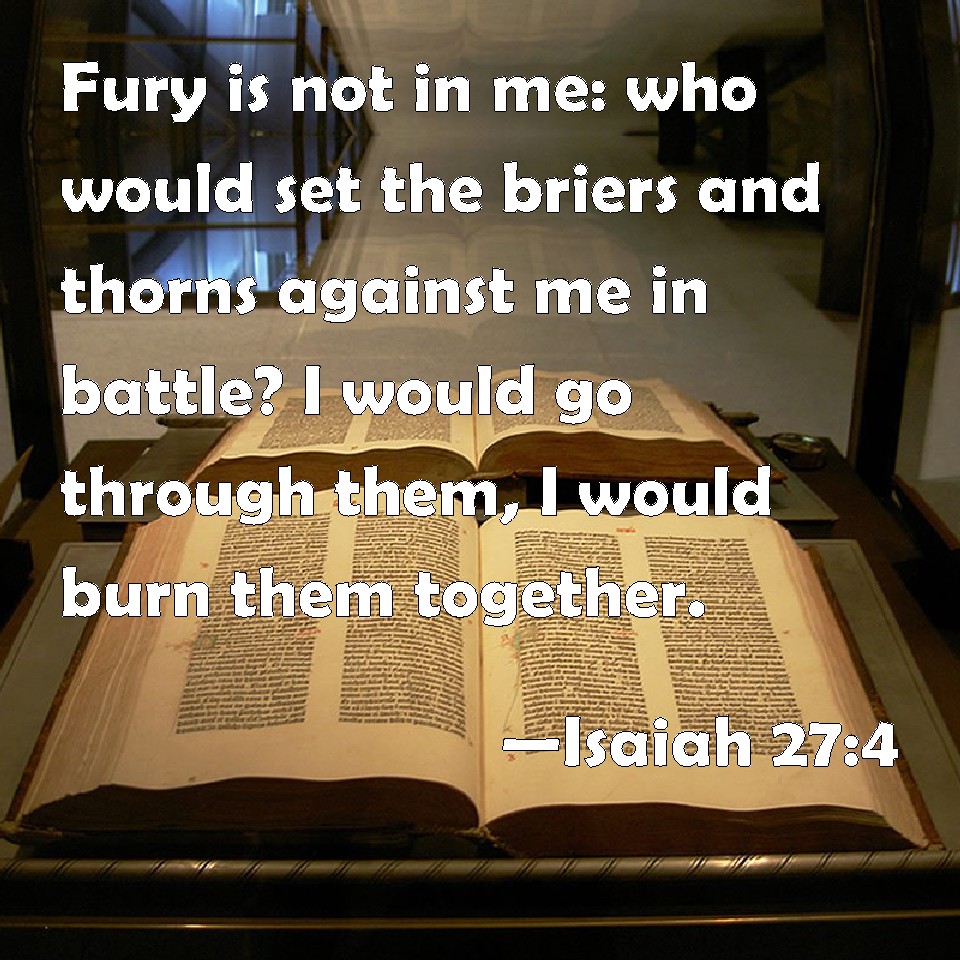 5Or else let them come to ME for refuge;
Let them make peace with ME,
yes, let them make peace with ME.”
6In days to come Jacob will take root,
Israel will bud and blossom
and fill all the world with fruit.
7Has The LORD Struck her
As HE Struck Down those who struck her?
Has she been killed
as those were killed who killed her?
8By warfarea and exile YOU Contend With her—
with HIS Fierce Blast HE Drives her Out,
as on a day the east wind blows.
9By this, then, will Jacob’s guilt be atoned for,
and this will be the full fruit of the removal of his sin:
When HE Makes all the altar stones
to be like limestone crushed to pieces,
no Asherah poles or incense altars
will be left standing.
10The fortified city stands desolate,
an abandoned settlement, forsaken like the wilderness;
there the calves graze,
there they lie down;
they strip its branches bare.
11When its twigs are dry, they are broken off
and women come and make fires with them.
For this is a people without understanding;
so their MAKER Has No Compassion On them,
and their CREATOR Shows them no Favor.

12In that day The LORD Will Thresh from the flowing Euphrates to the Wadi of Egypt, and you, Israel, will be gathered up one by one.13And in that day a great trumpet will sound. Those who were perishing in Assyria and those who were exiled in Egypt will come and worship The LORD on the Holy Mountain in Jerusalem.

Leviathan Will Be Slayed


27:1-5 The LORD JESUS with HIS Strong Sword, the virtue of HIS Death, and the preaching of HIS Gospel, Does and Will Destroy him that had the power of death, that is, the devil, that old serpent.

The world is a fruitless, worthless wilderness; but the church is a vineyard, a place that has great care taken of it, and from which precious fruits are gathered. GOD Will Keep it in the night of affliction and persecution, and in the day of peace and prosperity, the temptations of which are not less dangerous. GOD Also Takes Care of the fruitfulness of this vineyard.

We need the continual watering of Divine Grace; if these be at any time withdrawn, we wither, and come to nothing. Though GOD sometimes Contends With His people, yet HE Graciously Waits To Be Reconciled To them. It is true, when He Finds briers and thorns instead of vines, and they are set in array against HIM, HE Will Tread them Down and Burn them.

Here is a summary of the doctrine of the Gospel, with which the church is to be watered every moment.  Here is a gracious invitation given. Pardoning Mercy is called the Power of our Lord; let us take hold on that. CHRIST Crucified is the Power of GOD. Let us by lively faith take hold on HIS Strength WHO Is a Strength to the needy, believing there is no other Name By Which we can be saved, as a man that is sinking catches hold of a bough, or cord, or plank, that is in his reach. This is the only way, and it is a sure way, to be saved. GOD Is Willing To Be Reconciled To us.

27:6-13 In the days of the Gospel, the latter days, the Gospel church shall be more firmly fixed than the Jewish church, and shall spread further. May our souls be continually watered and kept, that we may abound in the Fruits of The SPIRIT, in all goodness, righteousness, and truth. The Jews yet are kept a separate and a numerous people; they have not been rooted out as those who killed them. The condition of that nation, through so many ages, forms a certain proof of the Divine Origin of the Scriptures; and the Jews live among us, a continued warning against sin.

But though winds are ever so rough, ever so high, GOD Can Say To them, “Peace, Be Still.” And though GOD Will Afflict HIS people, yet HE Will Make their afflictions to work for the good of their souls. According to this Promise, since the captivity in Babylon, no people have shown such hatred to idols and idolatry as the Jews. And to all GOD’S people, the design of affliction is to part between them and sin.

The affliction has done us good, when we keep at a distance from the occasions of sin, and use care that we may not be tempted to it. Jerusalem had been defended by Grace and the Divine Protection; but When GOD Withdrew, she was left like a wilderness. This has awfully come to pass. And this is a figure of the deplorable state of the vineyard, the church, when it brought forth wild grapes.

Sinners flatter themselves they shall not be dealt with severely, because GOD Is Merciful, and is their Maker. We see how weak those pleas will be. Verses 12, 13, seem to predict the restoration of the Jews after the Babylonian captivity, and their recovery from their present dispersion. This is further applicable to the preaching of the Gospel, by which sinners are gathered into the Grace of GOD; the Gospel proclaims the acceptable Year of The LORD.

Those gathered by the sounding of the Gospel trumpet, are brought in to worship GOD, and added to the church; and the last trumpet will gather all the saints together when CHRIST Come Again.