Did You Know That The Silver And The Gold On Earth Is All JEHOVAH'S?

1 On the twenty-first day of the seventh month, The WORD of The LORD Came through the prophet Haggai:


2 “Speak to Zerubbabel son of Shealtiel, governor of Judah, to Joshua son of Jozadak,a the high priest, and to the remnant of the people. Ask them, 3‘Who of you is left who saw this House in its former glory? How does it look to you now? Does it not seem to you like nothing?


4But now be strong, Zerubbabel,’


‘Be strong, Joshua son of Jozadak, the high priest. Be

strong, all you people of the land,’


5‘This Is What I Covenanted With you when you came

out of Egypt. And MY SPIRIT Remains among you. 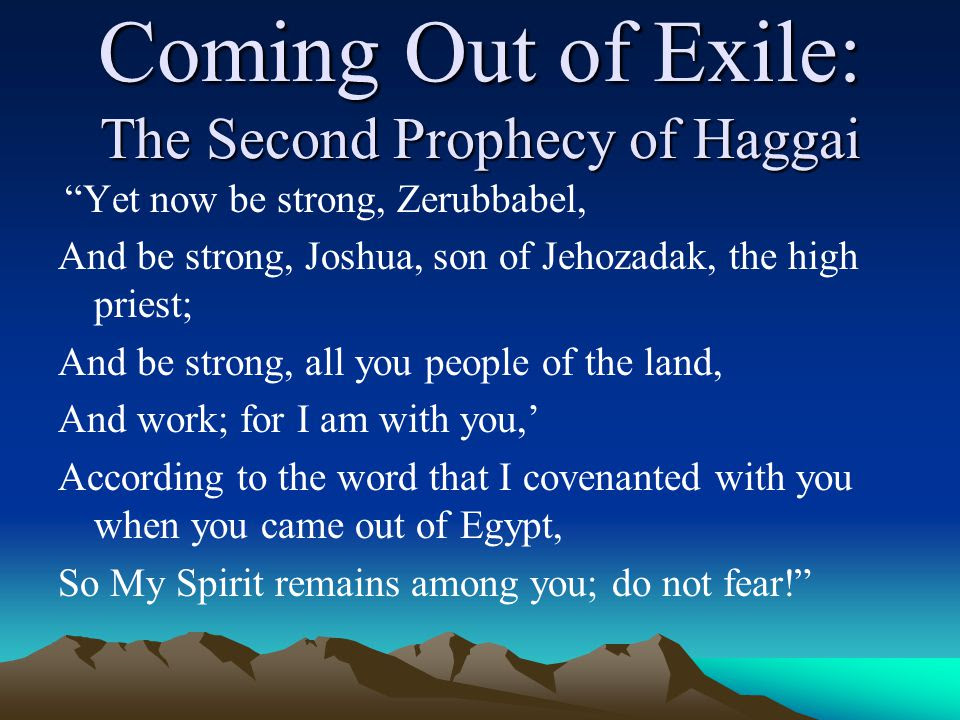 6“This Is What The LORD ALMIGHTY Says:

the earth, the sea and the dry land.


7I Will Shake all nations, and What Is Desired by all

nations Will Come, and I Will Fill this House with


8‘The silver is MINE and the gold is MINE,’

9‘The Glory of this present House will be greater than

the Glory of the former house,’


‘And in this place I Will Grant peace,’

Blessings for a Defiled People

10On the twenty-fourth day of the ninth month, in the second year of Darius,

The WORD of The LORD Came to the prophet Haggai:

11“This Is What The LORD ALMIGHTY Says:


‘Ask the priests what the Law says:

12If someone carries consecrated meat in the fold of their garment, and that fold touches some bread or stew, some wine, olive oil or other food, does it become consecrated?’ ”

The priests answered, “No.”


“If a person defiled by contact with a dead body touches one of these things, does it become defiled?”


“ ‘So it is with this people and this nation in MY Sight,’

15“ ‘Now give careful thought to this from this day onb —consider how things were before one stone was laid on another in The LORD'S Temple. 16When anyone came to a heap of twenty measures, there were only ten. When anyone went to a wine vat to draw fifty measures, there were only twenty. 17I Struck all the work of your hands with blight, mildew and hail, yet you did not return to ME,’


18‘From this day on, from this twenty-fourth day of the ninth month, give careful thought to the day when the foundation of The LORD'S Temple was laid.


19Is there yet any seed left in the barn? Until now, the vine and the fig tree, the pomegranate and the olive tree have not borne fruit.


20The WORD of The LORD Came to Haggai a second time on the twenty-fourth day of the month:


21“Tell Zerubbabel governor of Judah that I AM Going To Shake the heavens and the earth. 22I Will Overturn royal thrones and shatter the power of the foreign kingdoms. I Will Overthrow chariots and their drivers; horses and their riders will fall, each by the sword of his brother.


‘I Will Take you, MY servant Zerubbabel son of Shealtiel,’


‘and I Will Make you like MY Signet Ring, for I Have Chosen you,’


In the seventh month: This message came in October of 520 B.C. It was feast time in Israel, celebrating both the Day of Atonement and the Feast of Tabernacles.

Who is left among you who saw this temple in its former glory? Haggai spoke some 66 years after the Temple was destroyed. Certainly there were some old men who had seen Solomon’s temple in its splendor.

But many of the priests and Levites and heads of the fathers’ houses, old men who had seen the first temple, wept with a loud voice when the foundation of this Temple was laid before their eyes. Yet many shouted aloud for joy, so that the people could not discern the noise of the shout of joy from the noise of the weeping of the people, for the people shouted with a loud shout, and the sound was heard afar off. (Ezra 3:12-13)

The men in Ezra 3 wept because they saw this Temple in its former glory. When Solomon built the first temple, he spared no expense in materials, and hired the best talent he could find to do the work.

In comparison with it, is this not in your eyes as nothing: These kinds of comparisons between “the good old days” and the present day - or between the work of GOD in various places and times - are rarely beneficial. It didn’t do the people of Haggai’s day any good to think of how magnificent Solomon’s temple was compared to their own rebuilding work.

Be strong . . . and work . . . do not fear: GOD gives the leaders and people of Israel three clear commands. Each of these three is essential to getting The Work of GOD done. Great things are not accomplished without action.

I AM With you . . . according to The Word that I Covenanted with you when you came out of Egypt: The same GOD that did great things in the past is among them today, so be encouraged.

MY SPIRIT Remains among you: Under the Old Covenant The HOLY SPIRIT Was among the people. Under the New Covenant HE Is in GOD’S people.

Why the rebuilt Temple will be more glorious than the Temple of Solomon?

Once more . . . I Will Shake heaven and earth: This is the only portion of Haggai quoted in the New Testament (Hebrews 12:26).

They shall come to the Desire of All Nations: Through the centuries, most see this as a prophecy of The MESSIAH Coming to this Temple rebuilt in the days of Haggai and Ezra. Some point out that this word for Desire can also be translated treasures. We know that the Gentiles will bring tribute to the LORD in the Millennium (Isaiah 60:5) - but that won’t bring treasure to this Temple that was rebuilt in the days of Ezra and Haggai.

The True Desire of All Nations Is JESUS, even if the nations themselves do not know it. “HE Is The One, The True Reformer, The True Rectifier of all wrong, and in this respect the desire of all nations. Oh! if the world could gather up all her right desire; if she could condense in one cry all her wild wishes; if all true lovers of mankind could condense their theories and extract the true wine of wisdom from them; it would just come to this, we want an Incarnate GOD, and you have got the Incarnate GOD! (Spurgeon)

Knowing that JESUS Is the Desire of All Nations also encourages our missionary work. “Brethren, I may add, CHRIST is certainly the Desire of all nations in this respect, that we desire HIM for all nations. (Spurgeon)


“The silver is MINE, and the gold is MINE,” says The LORD of hosts: They didn’t need to be discouraged if they didn’t have money for the building project. They had to boldly trust The GOD Who owned every resource, and then give generously.

“Because CHRIST Shall Appear and Preach in it, WHO Is The Brightness of HIS FATHER’S Glory.”

Some scholars speculate that Herod remodeled the Temple with the intent of fulfilling the Glory of this latter Temple shall be greater than the former, so that he might fulfill it instead of The MESSIAH.

And in this place I Will Give peace: The promised peace is shalom. It means far more than stopping conflict - it is the establishment of a lasting, righteous, good.