JESUS Was Sold At The Thirty Pieces Of Silver

1Open your doors, Lebanon,
so that fire may devour your cedars!
2Wail, you juniper, for the cedar has fallen;
the stately trees are ruined!
Wail, oaks of Bashan;
the dense forest has been cut down!
3Listen to the wail of the shepherds;
their rich pastures are destroyed!
Listen to the roar of the lions;
the lush thicket of the Jordan is ruined!


4This Is What The LORD my GOD Says:


“Shepherd the flock marked for slaughter. 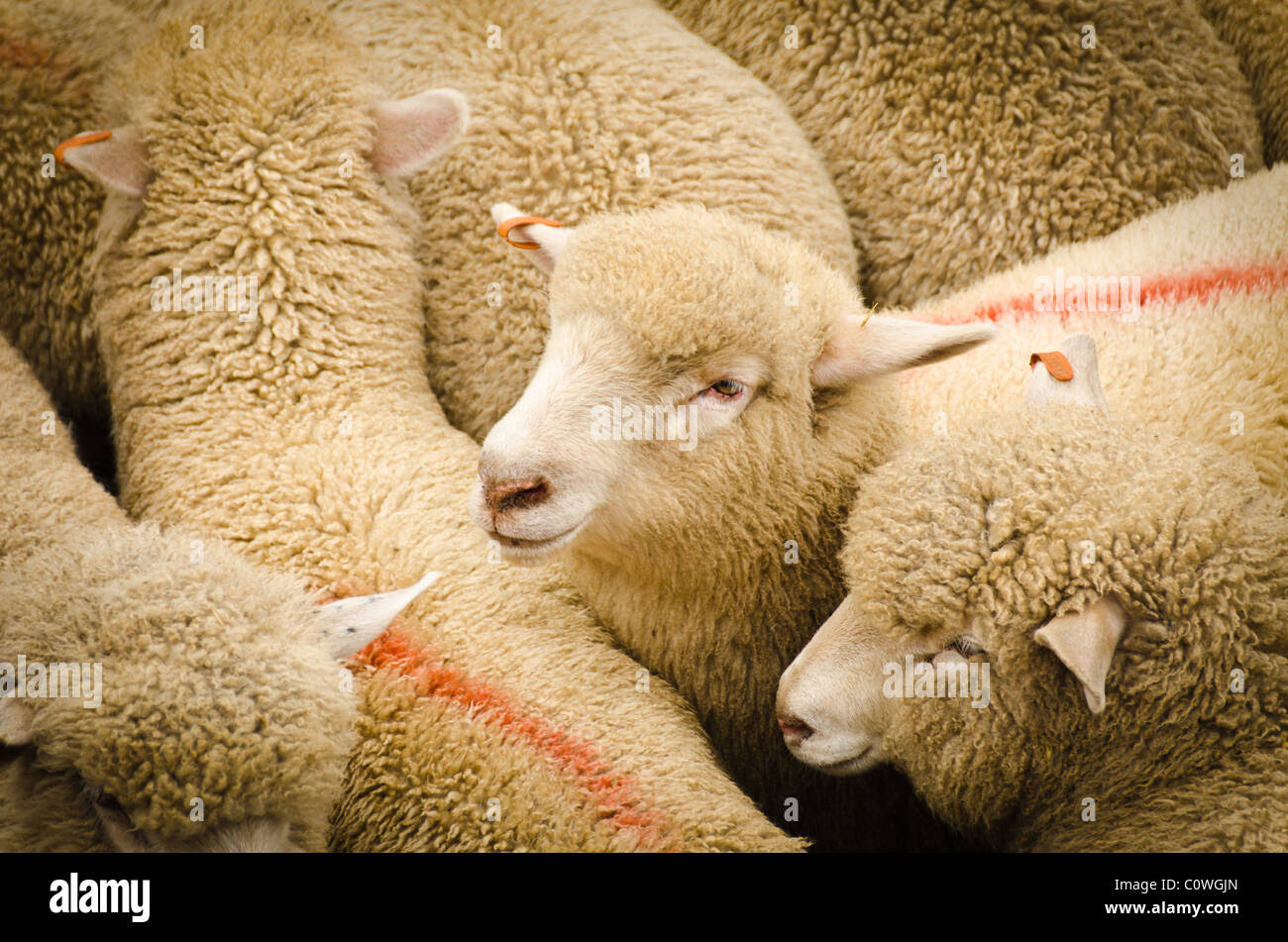 5Their buyers slaughter them and go unpunished. Those who sell them say, ‘Praise The LORD, I am rich!’ Their own shepherds do not spare them. 6For I Will no longer Have Pity on the people of the land,”


“I Will Give everyone into the hands of their neighbors and their king. They will devastate the land, and I Will Not Rescue anyone from their hands.”

7So I shepherded the flock marked for slaughter, particularly the oppressed of the flock. Then I took two staffs and called one Favor and the other Union, and I shepherded the flock. 8In one month I got rid of the three shepherds. The flock detested me, and I grew weary of them 9and said, “I will not be your shepherd. Let the dying die, and the perishing perish. Let those who are left eat one another’s flesh.”

10Then I took my staff called Favor and broke it, revoking the covenant I had made with all the nations.11It was revoked on that day, and so the oppressed of the flock who were watching me knew it was The WORD of The LORD.


So they paid me thirty pieces of silver. 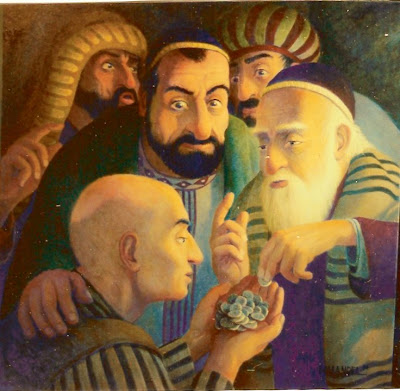 “Throw it to the potter”—

the handsome price at which they valued ME! 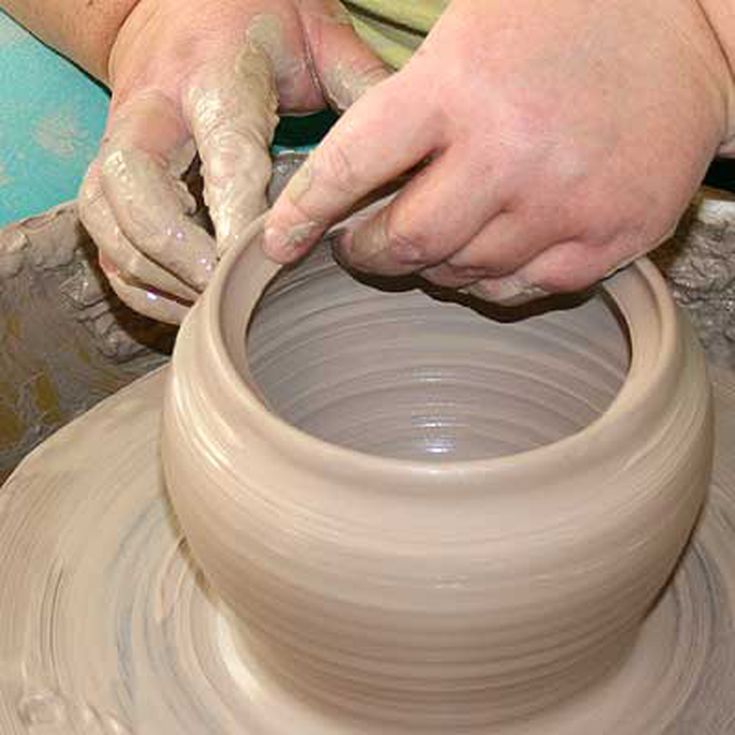 the potter at The House of The LORD. 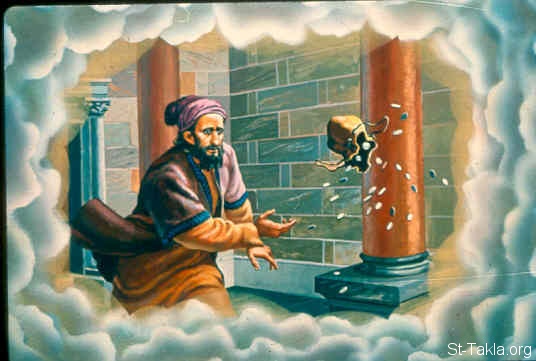 14Then I broke my second staff called Union, breaking the family bond between Judah and Israel.

15Then The LORD Said to me,


“Take again the equipment of a foolish shepherd. 16For I AM Going To Raise Up a shepherd over the land who will not care for the lost, or seek the young, or heal the injured, or feed the healthy, but will eat the meat of the choice sheep, tearing off their hooves.

17“Woe to the worthless shepherd,
who deserts the flock!
May the sword strike his arm and his right eye!
May his arm be completely withered,
his right eye totally blinded!”

11:1-3 In figurative expressions, that destruction of Jerusalem, and of the Jewish nation is foretold, which our LORD JESUS, when the time was at hand, Prophesied plainly and expressly.

How can the fir trees stand, if the cedars fall? The falls of the wise and good into sin, and the falls of the rich and great into trouble, are loud alarms to those every way their inferiors. It is sad with a people, when those who should be as shepherds to them, are as young lions. The pride of Jordan was the thickets on the banks; and when the river overflowed the banks, the lions came up from them roaring.

11:4-14 CHRIST Came into this world for judgment to the Jewish nation, which were wretchedly corrupt and degenerate. Those have their minds woefully blinded, who do ill, and justify themselves in it, but GOD Will Not Hold those guiltless who hold themselves so.  How can we go to GOD to beg a blessing on unlawful methods of getting wealth, or to return thanks for success in them? There was a general decay of religion among them, and they regarded it not.

The Good Shepherd Would Feed HIS flock, but HIS Attention would chiefly be directed to the poor. As an emblem, the prophet seems to have taken two staves; Beauty, denoted the privileges of the Jewish nation, in their national covenant; the other he called Bands, denoting the harmony which hitherto united them as the flock of GOD. But they chose to cleave to false teachers. The carnal mind and the friendship of the world are enmity to GOD; and GOD hates all the workers of iniquity: it is easy to foresee what this will end in.


The prophet demanded wages, or a reward, and received thirty pieces of silver. By Divine Direction he cast it to the potter, as in disdain for the smallness of the sum.


This shadowed forth the bargain of Judas to betray CHRIST, and the final method of applying it.


Nothing ruins a people so certainly, as weakening the brotherhood among them. This follows the dissolving of the Covenant between GOD and them: when sin abounds, love waxes cold, and civil contests follow. No wonder if those fall out among themselves, who have provoked GOD to fall out with them. Willful contempt of CHRIST is the great cause of men's ruin. And if professors rightly valued CHRIST, they would not contend about little matters.

11:15-17 GOD, Having Showed the misery of this people in their being justly left by the Good Shepherd, Shows their further misery in being abused by foolish shepherds. The description suits the character CHRIST Gives of the scribes and Pharisees. They never do anything to support the weak, or comfort the feeble-minded; but seek their own ease, while they are barbarous to the flock. The worthless shepherd has the appearance of a shepherd, receives submission, and is supported at much expense; but he leaves the flock to perish through neglect, or leads them to ruin by his example. This suits many in different churches and nations, but the warning had an awful fulfillment in the Jewish teachers. And while such deceive others to their ruin, they will themselves have the deepest condemnation.

In the eleventh chapter of Zechariah, there are five shepherds mentioned.

The first shepherd is The LORD JESUS CHRIST WHO Fed Israel during HIS ministry among them.  Israel is termed a ‘flock for slaughter,’ because its national leaders would reject HIM, resulting in the nation of Israel's slaughter by the Roman army under General Titus.

In particular, JESUS Blessed the poor of the flock with HIS Teachings and demonstrations of miraculous Powers. HIS Grace Brought salvation to sinners, and HIS Unity brought harmony between people from diverse social backgrounds. HE Fed the flock with grace and truth (grace and truth came through JESUS CHRIST. John 1:17).

Israel’s religious leaders are here termed, shepherds. The Herodians (political party), Sadducces (liberal party), and Pharisees (conservative party ) disliked each other, but they could agree in their hatred of JESUS. At the end of JESUS’ ministry, these three shepherds sought to trap JESUS with their questions. In Matthew 22, we have the account where JESUS faced all three and answered all three of them.

Afterwards,  in Chapter 23, HE Expressed HIS Loathing of them.

I Dismissed the three shepherds in one month. MY Soul Loathed them, and their soul also abhorred ME. Zechariah 11:8

And they sent to HIM their disciples with the Herodians, saying,


“Teacher, we know that YOU Are True, and Teach the way of GOD  in truth; nor Do YOU Care About anyone, for YOU Do Not Regard the person of men. Tell us, therefore, what Do YOU Think? Is it lawful to pay taxes to Caesar, or not?” Matthew 22:16-17

The same day the Sadducees, who say there is no resurrection, came to HIM and asked HIM, Matthew 22:23

But when the Pharisees heard that HE Had Silenced the Sadducees, they gathered together. Then one of them, a lawyer, asked HIM a question, testing HIM, and saying, Matthew 22:34-35

The prophecy of Zechariah continues and gives the exact amount of silver that Judas was paid to betray JESUS.

Then I said to them, “If it is agreeable to you, give me my wages; and if not, refrain.” So they weighed out for my wages thirty pieces of silver. Zechariah 11:12

Finally, Zechariah prophesied about a foolish and worthless shepherd who will be a future leader of Israel. Because Israel rejected their true SHEPHERD, they will be deceived and follow the Anti-Christ who is yet to appear according to many biblical prophecies.

And The LORD Said to me,

“Next, take for yourself the implements of a foolish shepherd.  For indeed I Will Raise up a shepherd in the land who will not care for those who are cut off, nor seek the young, nor heal those that are broken, nor feed those that still stand. But he will eat the flesh of the fat and tear their hooves in pieces.

“Woe to the worthless shepherd,
Who leaves the flock!
A sword shall be against his arm
And against his right eye;
His arm shall completely wither,
And his right eye shall be totally blinded.” Zechariah 11:15-17

These following verses from various scriptures describe the coming Anti-Christ. The GOD of his fathers refers to The ALMIGHTY GOD of the Old Testament while the desire of women refers to Israel's promised MESSIAH WHO Would Be Born of a woman. It was the desire of a woman to have the priviledge to give birth to The MESSIAH  WHO Would Deliver Israel from their oppressors.

“Then the king shall do according to his own will: he shall exalt and magnify himself above every god, shall speak blasphemies against the GOD of gods, and shall prosper till the wrath has been accomplished; for what has been determined shall be done. He shall regard neither the GOD of his fathers nor the Desire of women, nor regard any god; for he shall exalt himself above them all. Daniel 11:36-37.

He will oppose and will exalt himself over everything that is called GOD or is worshiped, so that he sets himself up in GOD’S Temple, proclaiming himself to be GOD. 2 Thessalonians 2: 4

Who is a liar but he who denies that JESUS Is The CHRIST? He is antichrist who denies The FATHER and The SON. 1 John 2:22.

Then I saw another beast coming up out of the earth, and he had two horns like a lamb and spoke like a dragon. Revelation 13:11