The Repentance of The Nation Israel Is Foretold


Jerusalem’s Enemies to Be Destroyed


1A prophecy: The WORD of The LORD concerning Israel.

The LORD, WHO Stretches out the heavens, WHO Lays the foundation of the earth, and WHO Forms the human spirit within a person, 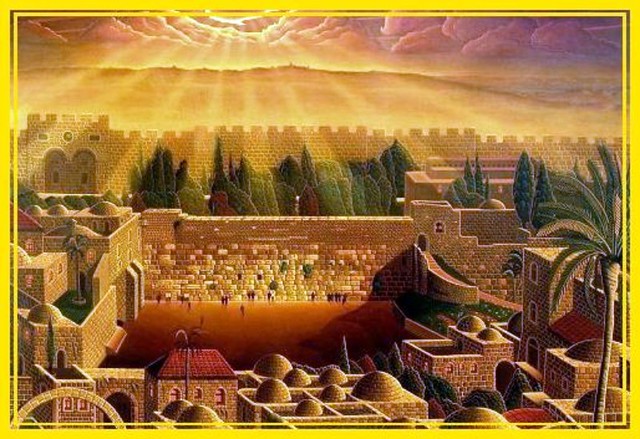 4On that day I Will Strike every horse with panic and its rider with madness,”


“I Will Keep a watchful eye over Judah, but I Will Blind all the horses of the nations. 5Then the clans of Judah will say in their hearts, ‘The people of Jerusalem are strong, because The LORD ALMIGHTY Is their GOD.’

6“On that day I Will Make the clans of Judah like a firepot in a woodpile, like a flaming torch among sheaves. They will consume all the surrounding peoples right and left, but Jerusalem will remain intact in her place.

7“The LORD Will Save the dwellings of Judah first, so that the honor of the house of David and of Jerusalem’s inhabitants may not be greater than that of Judah.


8On that day The LORD Will Shield those who live in Jerusalem, so that the feeblest among them will be like David, and the house of David will be like GOD, like The ANGEL of The LORD Going before them.


9On that day I Will Set Out To Destroy all the nations that attack Jerusalem.


Mourning for The ONE They Pierced

David and the inhabitants of Jerusalem

The SPIRIT of Grace and Supplication.

They will look on ME, The ONE they have pierced, and they

will mourn for HIM as one mourns for an only child, and

grieve bitterly for HIM as one grieves for a firstborn son.


12:1-8 Here is a DIVINE Prediction, which will be a heavy burden to all the enemies of the church. But it is for Israel; for their comfort and benefit. It is promised that GOD Will Make foolish the counsels, and weaken the courage of the enemies of the church. The exact meaning is not clear; but GOD often Begins by calling the poor and despised; and in that day even the feeblest will resemble David, and be as eminent in courage and everything good.

Desirable indeed is it that the examples and labors of Christians should render them as fire among wood, as a torch in a sheaf, to kindle the flame of DIVINE Love, to spread religion on the right hand and on the left.

12:9-14 The day here spoken of, is the day of Jerusalem's defense and deliverance, that Glorious Day when GOD Will Appear for the salvation of HIS people.

In CHRIST'S First Coming HE Bruised the serpent's head, and Broke all the powers of darkness that fought against GOD'S Kingdom among men. In HIS Second Coming HE Will Complete their destruction, when HE Shall Put Down all opposing rule, principality, and power; and death itself shall be swallowed up in that victory.

The HOLY SPIRIT Is Gracious and Merciful, and is The Author of all Grace or Holiness. HE, also, Is The SPIRIT of Supplications, and Shows men their ignorance, want, guilt, misery, and danger. At the time here foretold, the Jews will know WHO The Crucified JESUS Was; then they shall look by faith to HIM, and mourn with the deepest sorrow, not only in public, but in private, even each one separately.

There is a holy mourning, the effect of the Pouring Out of The SPIRIT; mourning for sin, which quickens faith in CHRIST, and qualifies for joy in GOD. This mourning is a Fruit of The SPIRIT of Grace, a proof of a work of grace in the soul, and of The SPIRIT of Supplications. It is fulfilled in all who sorrow for sin after a godly sort; they look to CHRIST Crucified, and mourn for HIM. Looking by faith upon The Cross of CHRIST Will Cause us to mourn for sin after a godly sorrow.