David Brings The Ark Of JEHOVAH From Obededom

The Ark Brought to Jerusalem

1After David had constructed buildings for himself in the City of David, he prepared a place for the Ark of GOD and pitched a tent for it.

3David assembled all Israel in Jerusalem to bring up the Ark of The LORD to the place he had prepared for it. 4He called together the descendants of Aaron and the Levites:

5From the descendants of Kohath,
Uriel the leader and 120 relatives;

6from the descendants of Merari,
Asaiah the leader and 220 relatives;

7from the descendants of Gershon,a
Joel the leader and 130 relatives;

8from the descendants of Elizaphan,
Shemaiah the leader and 200 relatives;

9from the descendants of Hebron,
Eliel the leader and 80 relatives;

10from the descendants of Uzziel,
Amminadab the leader and 112 relatives.

11Then David summoned Zadok and Abiathar the priests, and Uriel, Asaiah, Joel, Shemaiah, Eliel and Amminadab the Levites. 12He said to them, “You are the heads of the Levitical families; you and your fellow Levites are to consecrate yourselves and bring up the Ark of The Lord, The GOD of Israel, to the place I have prepared for it.

13 It was because you, the Levites, did not bring it up the first time that The LORD our GOD Broke Out in Anger Against us.


We did not inquire of HIM about how to do it in the prescribed way.” 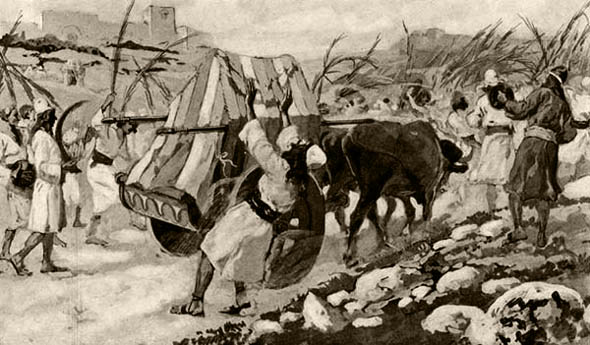 14So the priests and Levites consecrated themselves in order to bring up the Ark of The LORD, The GOD of Israel. 15And the Levites carried the Ark of GOD with the poles on their shoulders, as Moses had commanded in accordance with The WORD of The LORD.

16David told the leaders of the Levites to appoint their fellow Levites as musicians to make a joyful sound with musical instruments: lyres, harps and cymbals.

17So the Levites appointed Heman son of Joel; from his relatives, Asaph son of Berekiah; and from their relatives the Merarites, Ethan son of Kushaiah; 18and with them their relatives next in rank: Zechariah,bJaaziel, Shemiramoth, Jehiel, Unni, Eliab, Benaiah, Maaseiah, Mattithiah, Eliphelehu, Mikneiah, Obed-Edom and Jeiel,c the gatekeepers.

19The musicians Heman, Asaph and Ethan were to sound the bronze cymbals; 20Zechariah, Jaaziel,dShemiramoth, Jehiel, Unni, Eliab, Maaseiah and Benaiah were to play the lyres according to alamoth,e 21and Mattithiah, Eliphelehu, Mikneiah, Obed-Edom, Jeiel and Azaziah were to play the harps, directing according tosheminith.f 22Kenaniah the head Levite was in charge of the singing; that was his responsibility because he was skillful at it. 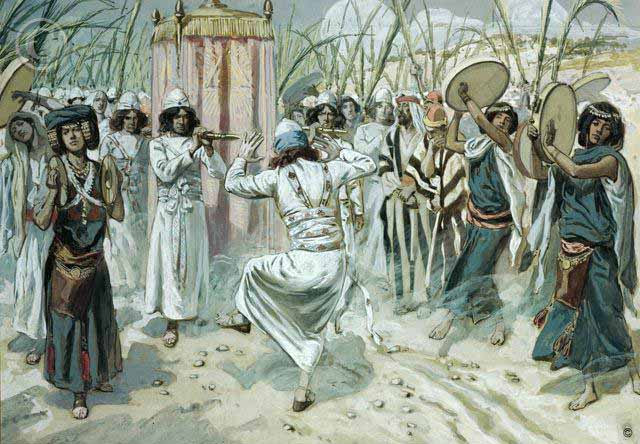 29As the Ark of the Covenant of The LORD was entering the City of David, Michal daughter of Saul watched from a window.

And when she saw King David dancing and celebrating,

she despised him in her heart.

David Brings the Ark of JEHOVAH from Obededom

David made his houses in the city of David - Through the liberality of his Tyrian ally (1 Chronicles 14:1), David was enabled to erect not only a palace for himself, but to furnish suitable accommodation for his numerous family.


And prepared a place for the Ark of GOD, and pitched for it a tent - That is, made an entirely new one upon the model of the former. The old tabernacle, which Moses had constructed in the wilderness and which had hitherto served the purpose of a sacred covering, was to be left at Gibeon, either because of the unwillingness of the inhabitants to part with such a venerable relic, or because there was no use for it in Jerusalem, where a more solid edifice was contemplated.