Solomon Builds The Temple of JEHOVAH

1In the four hundred and eightieth a year after the Israelites came out of Egypt, in the fourth year of Solomon’s reign over Israel, in the month of Ziv, the second month, he began to build The Temple of The LORD.

2The Temple that King Solomon built for The LORD was sixty cubits long, twenty wide and thirty high. b 3The portico at the front of the main hall of the temple extended the width of the temple, that is twenty cubits, c and projected ten cubits d from the front of the temple. 4He made narrow windows high up in the temple walls. 5Against the walls of the main hall and inner sanctuary he built a structure around the building, in which there were side rooms. 6The lowest floor was five cubits e wide, the middle floor six cubits f and the third floor seven. g He made offset ledges around the outside of the temple so that nothing would be inserted into the temple walls.

7In building the temple, only blocks dressed at the quarry were used, and no hammer, chisel or any other iron tool was heard at the temple site while it was being built.

8The entrance to the lowest h floor was on the south side of the temple; a stairway led up to the middle level and from there to the third. 9So he built the temple and completed it, roofing it with beams and cedar planks. 10And he built the side rooms all along the temple. The height of each was five cubits, and they were attached to the temple by beams of cedar.

11The WORD of The LORD Came to Solomon:

12“As for this Temple you are building, if you follow MY Decrees, observe MY Laws and keep all MY Commands and obey them, I Will Fulfill through you the promise I Gave to David your father.

13And I Will Live among the Israelites and Will Not Abandon MY people Israel.”

23For the inner sanctuary he made a pair of cherubim out of olive wood, each ten cubits high. 24One wing of the first cherub was five cubits long, and the other wing five cubits—ten cubits from wing tip to wing tip. 25The second cherub also measured ten cubits, for the two cherubim were identical in size and shape. 26The height of each cherub was ten cubits. 27He placed the cherubim inside the innermost room of the temple, with their wings spread out. The wing of one cherub touched one wall, while the wing of the other touched the other wall, and their wings touched each other in the middle of the room. 28He overlaid the cherubim with gold.

36And he built the inner courtyard of three courses of dressed stone and one course of trimmed cedar beams.

37The foundation of the Temple of The LORD was laid in the fourth year, in the month of Ziv. 38In the eleventh year in the month of Bul, the eighth month, the temple was finished in all its details according to its specifications. He had spent seven years building it.

1It took Solomon thirteen years, however, to complete the construction of his palace. 2He built the Palace of the Forest of Lebanon a hundred cubits long, fifty wide and thirty high,a with four rows of cedar columns supporting trimmed cedar beams. 3It was roofed with cedar above the beams that rested on the columns—forty-five beams, fifteen to a row. 4Its windows were placed high in sets of three, facing each other. 5All the doorways had rectangular frames; they were in the front part in sets of three, facing each other.b

6He made a colonnade fifty cubits long and thirty wide.c In front of it was a portico, and in front of that were pillars and an overhanging roof.

7He built the throne hall, the Hall of Justice, where he was to judge, and he covered it with cedar from floor to ceiling.d

8And the palace in which he was to live, set farther back, was similar in design. Solomon also made a palace like this hall for Pharaoh’s daughter, whom he had married.

9All these structures, from the outside to the great courtyard and from foundation to eaves, were made of blocks of high-grade stone cut to size and smoothed on their inner and outer faces. 10The foundations were laid with large stones of good quality, some measuring ten cubitse and some eight.f 11Above were high-grade stones, cut to size, and cedar beams. 12The great courtyard was surrounded by a wall of three courses of dressed stone and one course of trimmed cedar beams, as was the inner courtyard of the Temple of The LORD with its portico.

13King Solomon sent to Tyre and brought Huram,g 14whose mother was a widow from the tribe of Naphtali and whose father was from Tyre and a skilled craftsman in bronze. Huram was filled with wisdom, with understanding and with knowledge to do all kinds of bronze work. He came to King Solomon and did all the work assigned to him. 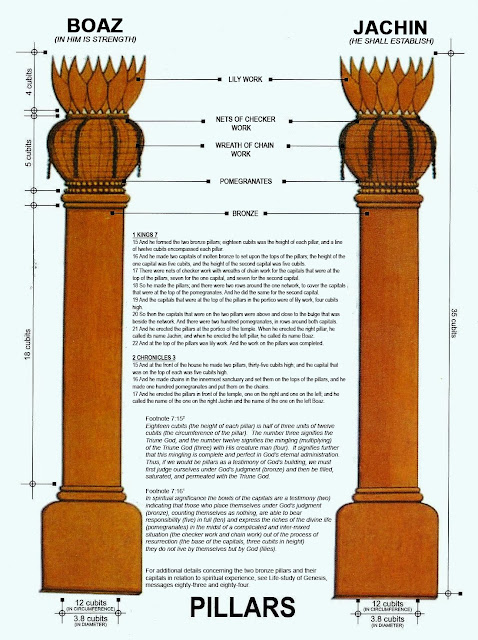 23He made the Sea of cast metal, circular in shape, measuring ten cubits from rim to rim and five cubits high. It took a line of thirty cubitso to measure around it.

24Below the rim, gourds encircled it—ten to a cubit. The gourds were cast in two rows in one piece with the Sea.

25The Sea stood on twelve bulls, three facing north, three facing west, three facing south and three facing east. The Sea rested on top of them, and their hindquarters were toward the center. 26It was a handbreadthpin thickness, and its rim was like the rim of a cup, like a lily blossom. It held two thousand baths.q 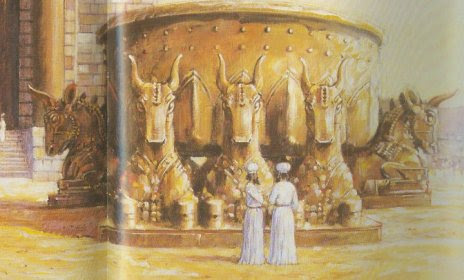 27He also made ten movable stands of bronze; each was four cubits long, four wide and three high.r28This is how the stands were made: They had side panels attached to uprights. 29On the panels between the uprights were lions, bulls and cherubim—and on the uprights as well. Above and below the lions and bulls were wreaths of hammered work. 30Each stand had four bronze wheels with bronze axles, and each had a basin resting on four supports, cast with wreaths on each side. 31On the inside of the stand there was an opening that had a circular frame one cubits deep. This opening was round, and with its basework it measured a cubit and a half.t Around its opening there was engraving. The panels of the stands were square, not round. 32The four wheels were under the panels, and the axles of the wheels were attached to the stand. The diameter of each wheel was a cubit and a half. 33The wheels were made like chariot wheels; the axles, rims, spokes and hubs were all of cast metal. 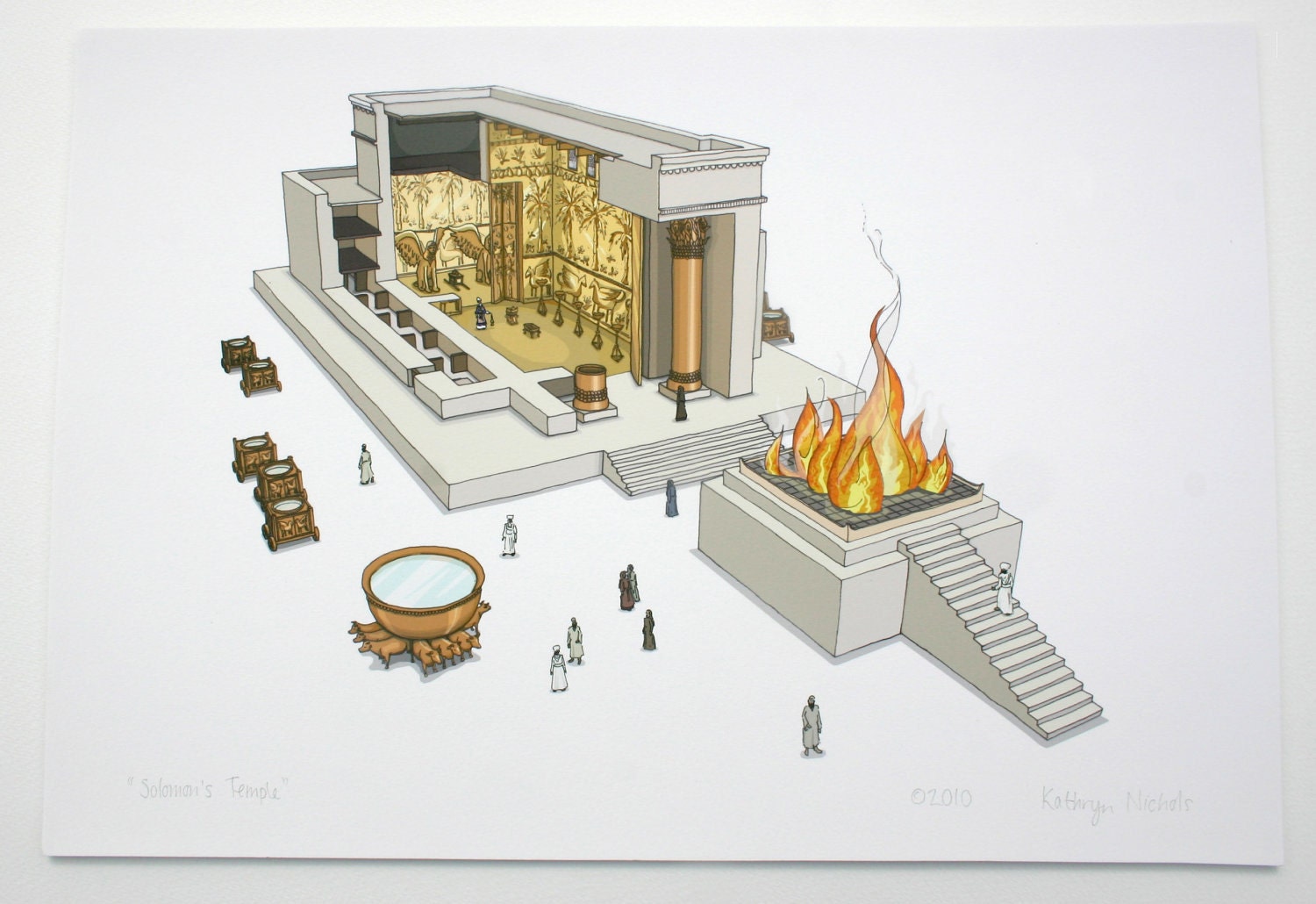 34Each stand had four handles, one on each corner, projecting from the stand. 35At the top of the stand there was a circular band half a cubitu deep. The supports and panels were attached to the top of the stand.36He engraved cherubim, lions and palm trees on the surfaces of the supports and on the panels, in every available space, with wreaths all around. 37This is the way he made the ten stands. They were all cast in the same molds and were identical in size and shape.

40He also made the potsw and shovels and sprinkling bowls.

So Huram finished all the work he had undertaken for King Solomon in the Temple of The LORD:

All these objects that Huram made for King Solomon for the Temple of The Lord were of burnished bronze.46The king had them cast in clay molds in the plain of the Jordan between Sukkoth and Zarethan. 47Solomon left all these things unweighed, because there were so many; the weight of the bronze was not determined.

48Solomon also made all the furnishings that were in The LORD'S Temple:

the golden altar;
the golden table on which was the bread of the Presence;
49the lampstands of pure gold (five on the right and five on the left, in front of the inner sanctuary);
the gold floral work and lamps and tongs;
50the pure gold basins, wick trimmers, sprinkling bowls, dishes and censers;
and the gold sockets for the doors of the innermost room, the Most Holy Place, and also for the doors of the main hall of the Temple. 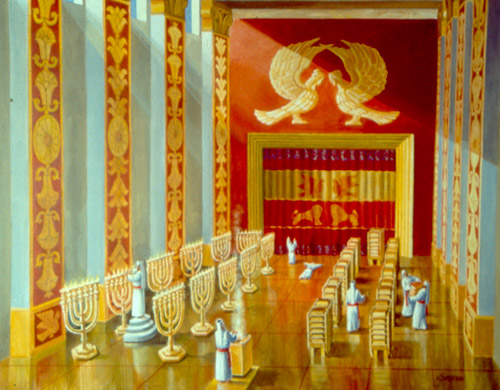 51When all the work King Solomon had done for the Temple of The LORD was finished, he brought in the things his father David had dedicated—the silver and gold and the furnishings—and he placed them in the treasuries of the LORD'S Temple.


How was The Temple built?

It has been a question whether Solomon, in the structure of the Temple, used any of the gold and silver which David had provided? And here it seems answered in the negative; for after the house was finished, with all its utensils and ornaments, with its immense profusion of gold, it is here said that Solomon brought in the silver, and the gold, and the vessels, which David his father had dedicated.


It appears therefore that Solomon had employed four years to make preparation for the work before it was begun. During the whole time of the building, he was no doubt still appropriating a part of the public revenue for this purpose; and the provision made by his father he placed among the treasures of the house; but the Temple was truly Solomon's, as he had provided all its materials, and borne every expense.