The Queen of Sheba Visits Solomon


1When the queen of Sheba heard about the fame of Solomon and his relationship to The Lord, she came to test Solomon with hard questions. 2Arriving at Jerusalem with a very great caravan—with camels carrying spices, large quantities of gold, and precious stones—she came to Solomon and talked with him about all that she had on her mind. 3Solomon answered all her questions; nothing was too hard for the king to explain to her. 4When the queen of Sheba saw all the wisdom of Solomon and the palace he had built, 5the food on his table, the seating of his officials, the attending servants in their robes, his cupbearers, and the burnt offerings he made at The Temple of The LORD, she was overwhelmed.

6She said to the king, “The report I heard in my own country about your achievements and your wisdom is true. 7But I did not believe these things until I came and saw with my own eyes. Indeed, not even half was told me; in wisdom and wealth you have far exceeded the report I heard. 8How happy your people must be! How happy your officials, who continually stand before you and hear your wisdom!

9 Praise Be To The LORD your GOD, WHO Has Delighted In you and Placed you on the throne of Israel. Because of The LORD'S Eternal Love for Israel, HE Has Made you king to maintain justice and righteousness.”

10And she gave the king 120 talentsb of gold, large quantities of spices, and precious stones. Never again were so many spices brought in as those the queen of Sheba gave to King Solomon.

11(Hiram’s ships brought gold from Ophir; and from there they brought great cargoes of almugwoodc and precious stones. 12The king used the almugwood to make supportsd for the Temple of The LORD and for the royal palace, and to make harps and lyres for the musicians. So much almugwood has never been imported or seen since that day.) 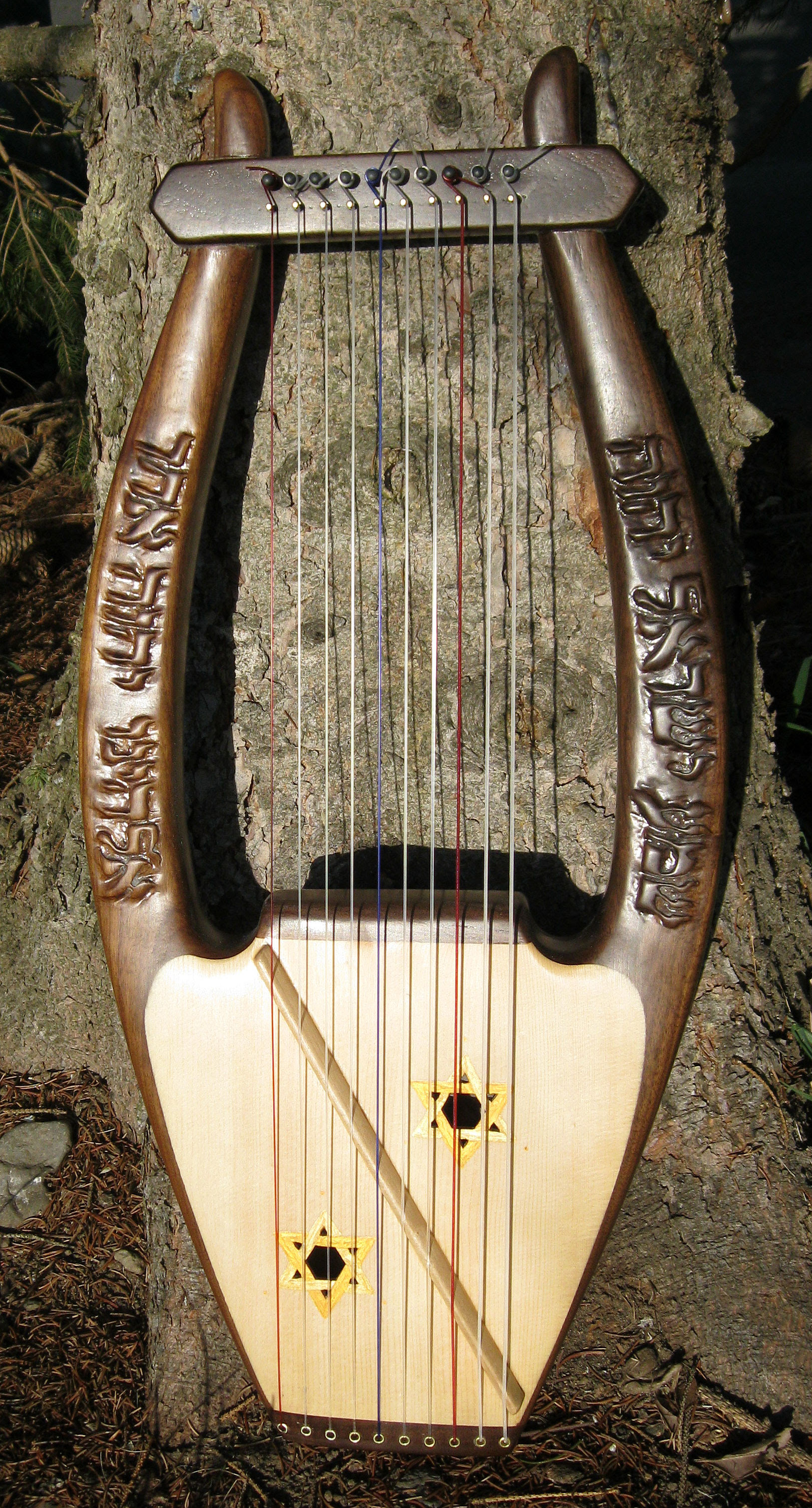 13King Solomon gave the queen of Sheba all she desired and asked for, besides what he had given her out of his royal bounty. Then she left and returned with her retinue to her own country. 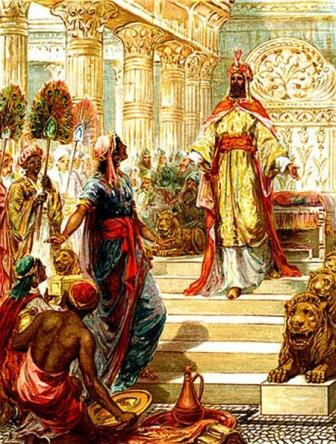 14The weight of the gold that Solomon received yearly was 666 talents,e 15not including the revenues from merchants and traders and from all the Arabian kings and the governors of the territories. 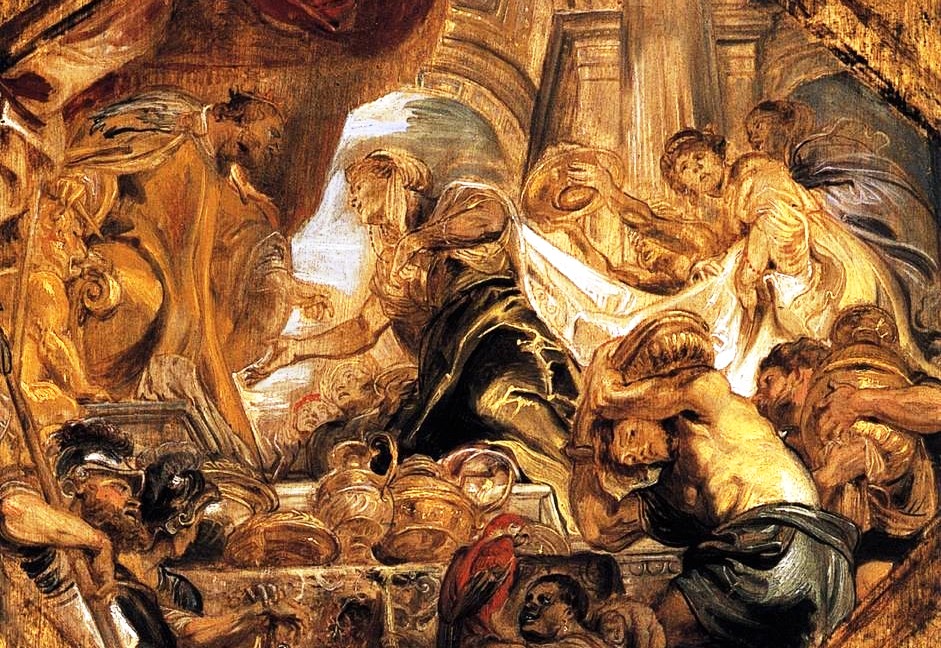 18Then the king made a great throne covered with ivory and overlaid with fine gold. 19The throne had six steps, and its back had a rounded top. On both sides of the seat were armrests, with a lion standing beside each of them. 20Twelve lions stood on the six steps, one at either end of each step. Nothing like it had ever been made for any other kingdom. 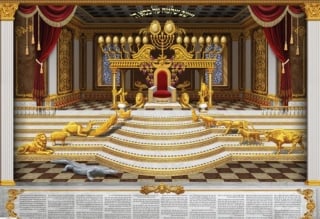 21All King Solomon’s goblets were gold, and all the household articles in the Palace of the Forest of Lebanon were pure gold. Nothing was made of silver, because silver was considered of little value in Solomon’s days. 22The king had a fleet of trading shipsh at sea along with the ships of Hiram. Once every three years it returned, carrying gold, silver and ivory, and apes and baboons.

23King Solomon was greater in riches and wisdom than all the other kings of the earth. 24The whole world sought audience with Solomon to hear the wisdom God had put in his heart. 25Year after year, everyone who came brought a gift—articles of silver and gold, robes, weapons and spices, and horses and mules.


26Solomon accumulated chariots and horses; he had fourteen hundred chariots and twelve thousand horses,i which he kept in the chariot cities and also with him in Jerusalem. 27The king made silver as common in Jerusalem as stones, and cedar as plentiful as sycamore-fig trees in the foothills. 28Solomon’s horses were imported from Egypt and from Kuej —the royal merchants purchased them from Kue at the current price. 29They imported a chariot from Egypt for six hundred shekels of silver, and a horse for a hundred and fifty.k They also exported them to all the kings of the Hittites and of the Arameans.


The Queen of Sheba

In this history, there are various points of view in which the Queen of Sheba appears as a type and representation of the Church, as we know that Solomon is in many respects a striking type of CHRIST. We have illustrations of GOD's Dealings with His people, and of the workings of Divine Grace, in the following particulars relating to the Queen of Sheba.

I. THE SOVEREIGNTY OF GOD'S ELECTION, AND THE FREENESS OF HIS COVENANT MERCY AND GRACE, are set forth in her being brought to the knowledge of the truth and being taught and led by The SPIRIT of GOD. The Calling of GOD Is Not Confined To any time or place or people. Rahab of Jericho, Ruth the Moabitess, Nebuchadnezzar King of Babylon, the King of Nineveh, and other interesting characters may be cited, along with this Queen of Sheba, to whom GOD Came in the Sovereignty and freeness of His Grace.


II. WE SEE IN THIS HISTORY HOW THE PURPOSES OF GOD ARE SURE TO BE ACCOMPLISHED AND FULFILLED. In the lives of saints and holy men of old, whether in the Scriptures or in private biographies, many such wonderful leadings of Providence can be admired. Every child of GOD can tell of such in his own experience.


III. WE OBSERVE IN THE EXPERIENCE OF THE QUEEN OF SHEBA THE ORDINARY WORKINGS OF THE SPIRIT OF GOD IN THE HEART. Hard questions arise when the mind thinks at all about spiritual things, and recur all through the Christian's experience.


V. AS IT WAS WITH THE QUEEN OF SHEBA, SO IT IS WITH EVERY SPIRIT-TAUGHT AND SPIRIT-LED SOUL, AS TO THE KNOWLEDGE AND ADORATION, AND WORSHIP OF CHRIST.