The Genealogy of King Saul

The Genealogy of Saul the Benjamite

1Benjamin was the father of Bela his firstborn,
Ashbel the second son, Aharah the third,

2Nohah the fourth and Rapha the fifth.

6These were the descendants of Ehud, who were heads of families of those living in Geba and were deported to Manahath:

7Naaman, Ahijah, and Gera, who deported them and who was the father of Uzza and Ahihud.

8Sons were born to Shaharaim in Moab after he had divorced his wives Hushim and Baara. 9By his wife Hodesh he had Jobab, Zibia, Mesha, Malkam, 10Jeuz, Sakia and Mirmah. These were his sons, heads of families. 11By Hushim he had Abitub and Elpaal.

12The sons of Elpaal:
Eber, Misham, Shemed (who built Ono and Lod with its surrounding villages), 13and Beriah and Shema, who were heads of families of those living in Aijalon and who drove out the inhabitants of Gath.

26Shamsherai, Shehariah, Athaliah, 27Jaareshiah, Elijah and Zikri were the sons of Jeroham.
28All these were heads of families, chiefs as listed in their genealogy, and they lived in Jerusalem.

His wife’s name was Maakah, 30and his firstborn son was Abdon, followed by Zur, Kish, Baal, Ner,d Nadab, 31Gedor, Ahio, Zeker 32and Mikloth, who was the father of Shimeah. They too lived near their relatives in Jerusalem. 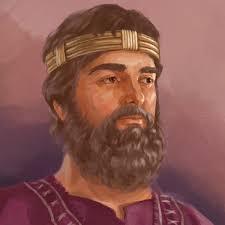 34The son of Jonathan:
Merib-Baal,f who was the father of Micah.

35The sons of Micah:
Pithon, Melek, Tarea and Ahaz.

38Azel had six sons, and these were their names:
Azrikam, Bokeru, Ishmael, Sheariah, Obadiah and Hanan. All these were the sons of Azel.

39The sons of his brother Eshek:
Ulam his firstborn, Jeush the second son and Eliphelet the third. 40The sons of Ulam were brave warriors who could handle the bow. They had many sons and grandsons—150 in all.

All these were the descendants of Benjamin.


The reason of this return to the genealogy of the Benjamites seems to be the desire to connect the genealogical introduction with the historical body of the work. As the history is to begin with Saul, the genealogical portion is made to end with an account of the family of this Benjamite monarch.