We Must Do GOD-Appointed Work Faithfully

1Now Ben-Hadad king of Aram mustered his entire army. Accompanied by thirty-two kings with their horses and chariots, he went up and besieged Samaria and attacked it.

2He sent messengers into the city to Ahab king of Israel, saying, “This is what Ben-Hadad says: 3‘Your silver and gold are mine, and the best of your wives and children are mine.’ ”

4The king of Israel answered, “Just as you say, my lord the king. I and all I have are yours.”

5The messengers came again and said, “This is what Ben-Hadad says: ‘I sent to demand your silver and gold, your wives and your children. 6But about this time tomorrow I am going to send my officials to search your palace and the houses of your officials. They will seize everything you value and carry it away.’ ”

7The king of Israel summoned all the elders of the land and said to them, “See how this man is looking for trouble! When he sent for my wives and my children, my silver and my gold, I did not refuse him.”

8The elders and the people all answered, “Don’t listen to him or agree to his demands.”

9So he replied to Ben-Hadad’s messengers, “Tell my lord the king, ‘Your servant will do all you demanded the first time, but this demand I cannot meet.’ ” They left and took the answer back to Ben-Hadad.

10Then Ben-Hadad sent another message to Ahab: “May the gods deal with me, be it ever so severely, if enough dust remains in Samaria to give each of my men a handful.”

11The king of Israel answered, “Tell him: ‘One who puts on his armor should not boast like one who takes it off.’ ”

12Ben-Hadad heard this message while he and the kings were drinking in their tents,a and he ordered his men: “Prepare to attack.” So they prepared to attack the city.

13Meanwhile a prophet came to Ahab king of Israel and announced,


‘Do you see this vast army? I Will Give it into your

hand today, and then you will know that I AM


‘The junior officers under the provincial commanders

“And who will start the battle?” he asked.

The prophet answered, “You will.”

Now Ben-Hadad had dispatched scouts, who reported, “Men are advancing from Samaria.”

19The junior officers under the provincial commanders marched out of the city with the army behind them20and each one struck down his opponent. At that, the Arameans fled, with the Israelites in pursuit. But Ben-Hadad king of Aram escaped on horseback with some of his horsemen. 21The king of Israel advanced and overpowered the horses and chariots and inflicted heavy losses on the Arameans.

22Afterward, the prophet came to the king of Israel and said, “Strengthen your position and see what must be done, because next spring the king of Aram will attack you again.”

23Meanwhile, the officials of the king of Aram advised him, “Their gods are gods of the hills. That is why they were too strong for us. But if we fight them on the plains, surely we will be stronger than they. 24Do this: Remove all the kings from their commands and replace them with other officers. 25You must also raise an army like the one you lost—horse for horse and chariot for chariot—so we can fight Israel on the plains. Then surely we will be stronger than they.” He agreed with them and acted accordingly.

26The next spring Ben-Hadad mustered the Arameans and went up to Aphek to fight against Israel.27When the Israelites were also mustered and given provisions, they marched out to meet them. The Israelites camped opposite them like two small flocks of goats, while the Arameans covered the countryside.

28The man of GOD came up and told the king of Israel,

‘Because the Arameans think The LORD Is A GOD of the

hills and not A GOD of the valleys, I Will Deliver this vast

army into your hands, and you will know that I AM


29For seven days they camped opposite each other, and on the seventh day the battle was joined. The Israelites inflicted a hundred thousand casualties on the Aramean foot soldiers in one day. 30The rest of them escaped to the city of Aphek, where the wall collapsed on twenty-seven thousand of them. And Ben-Hadad fled to the city and hid in an inner room.

31His officials said to him, “Look, we have heard that the kings of Israel are merciful. Let us go to the king of Israel with sackcloth around our waists and ropes around our heads. Perhaps he will spare your life.”

32Wearing sackcloth around their waists and ropes around their heads, they went to the king of Israel and said, “Your servant Ben-Hadad says: ‘Please let me live.’ ”

The king answered, “Is he still alive? He is my brother.”

33The men took this as a good sign and were quick to pick up his word. “Yes, your brother Ben-Hadad!” they said.

“Go and get him,” the king said. When Ben-Hadad came out, Ahab had him come up into his chariot.

34“I will return the cities my father took from your father,” Ben-Hadad offered. “You may set up your own market areas in Damascus, as my father did in Samaria.”

Ahab said, “On the basis of a treaty I will set you free.” So he made a treaty with him, and let him go.

35 By The WORD of The LORD one of the company of the prophets said to his companion, “Strike me with your weapon,” but he refused.

36 So the prophet said, “Because you have not obeyed The LORD, as soon as you leave me a lion will kill you.” And after the man went away, a lion found him and killed him. 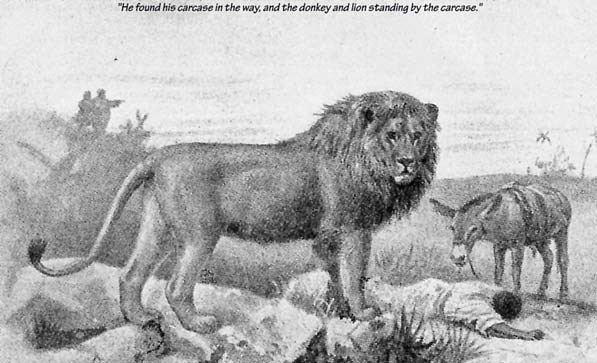 37 The prophet found another man and said, “Strike me, please.” So the man struck him and wounded him. 38Then the prophet went and stood by the road waiting for the king. He disguised himself with his headband down over his eyes. 39As the king passed by, the prophet called out to him, “Your servant went into the thick of the battle, and someone came to me with a captive and said, ‘Guard this man. If he is missing, it will be your life for his life, or you must pay a talentb of silver.’ 40While your servant was busy here and there, the man disappeared.”

“That is your sentence,” the king of Israel said. “You have pronounced it yourself.”

41Then the prophet quickly removed the headband from his eyes, and the king of Israel recognized him as one of the prophets.

‘You have set free a man I Had Determined should

die. Therefore it is your life for his life, your people for

43Sullen and angry, the king of Israel went to his palace in Samaria.

A certain man of the sons of the prophets: This seems to be a different prophet from the man mentioned earlier in the chapter. This is another reminder that the 7,000 faithful followers of Yahweh were active in Israel.

i. "Although he is not named, Josephus believed the anonymous 'man of GOD' introduced in verse 35 was Micaiah who figures so prominently in the next story. He suggested it was in retaliation for Micaiah's prophetic condemnation that the king put him in prison." (Dilday)

Strike me, please: Directed by GOD, the prophet needed an injury to display to King Ahab. When his neighbor refused, the prophet announced coming judgment on the neighbor - through the unusual method of a lion attack (a lion found him and killed him).

i. The neighbor was not just another man in the kingdom of Israel. The implication was that he was a fellow member of the sons of the prophets. He himself was a man given to following GOD and sensitive to GOD'S work in the prophets. He should have known better. Though this is not as clear in the New King James translation, it is more clear in other translations:

his companion (NIV), a certain member of a company of prophets said to another (NRSV) another (NASB) to another man (NLB).

ii. "This seems a hard measure, but there was ample reason for it. This person was also one of the sons of the prophets, and he knew that GOD frequently delivered his counsels in this way, and should have immediately obeyed; for the smiting could have had no evil in it when GOD Commanded it, and it could be no outrage or injury to his fellow when he himself required him to do it." (Clarke)

Disguised himself with a bandage over his eyes: Ready with his injury, the prophet waited for the arrival of King Ahab so he could deliver his message from GOD to the king.

Your servant went out into the midst of the battle: After the pattern of other prophets, this anonymous prophet brought a message to King Ahab through a made-up story.

While your servant was busy here and there, he was gone: The prophet's story told of a man who was responsible to guard the life of another, and proved himself unfaithful. In the story, the guilty man's excuse was that he was busy here and there - which was no excuse at all. He should have paid attention to the job he had to do.

i. "This was likely enough to happen on a battlefield. It would not be possible to hold your prisoner, and to busy yourself about other things at the same time." (Meyer)

ii. The prophet's made-up story with the fictional excuse becomes real in the life of many, especially many ministers of the Gospel.

"If a man is called to preach The WORD, and becomes busy over a hundred things other than that of his central work, and so loses the opportunity to preach, his failure is complete. That which is our GOD-appointed work, we must do. If we fail in that, the fact that we have been 'busy here and there,' doing all sorts of other things, is of no avail." (Morgan)

iii. He was gone: Even as the fictional prisoner escaped, so many opportunities escape us in the Christian life.


"I want you all to remember this morning that if any portion of life has not been spent in GOD’S Service it is gone. Time past is gone. You can never have it back again, not even the last moment which just now glided by." (Spurgeon)