JEHOVAH Appears To Solomon At Night


The Dedication of the Temple


1When Solomon finished praying, fire came down from heaven and consumed the burnt offering and the sacrifices, and the Glory of The LORD filled the Temple. 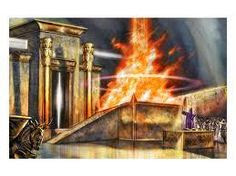 2The priests could not enter The Temple of The LORD because the Glory of The LORD Filled it.

3When all the Israelites saw the fire coming down and the Gory of The LORD above the Temple, they knelt on the pavement with their faces to the ground, and they worshiped and gave thanks To The LORD, saying,

“HE Is Good;
HIS Love Endures Forever.”

6The priests took their positions, as did the Levites with The LORD'S musical instruments, which King David had made for praising The LORD and which were used when he gave thanks, saying,

Opposite the Levites, the priests blew their trumpets, and all the Israelites were standing.

8So Solomon observed the festival at that time for seven days, and all Israel with him—a vast assembly, people from Lebo Hamath to the Wadi of Egypt. 9On the eighth day they held an assembly, for they had celebrated the dedication of the altar for seven days and the festival for seven days more. 10On the twenty-third day of the seventh month he sent the people to their homes, joyful and glad in heart for the Good Things The LORD Had Done for David and Solomon and for His people Israel.


The LORD Appears to Solomon

12The LORD Appeared to him at night and Said:

“I Have Heard your prayer and Have Chosen this place for MYSELF as a Temple for sacrifices.

13“When I Shut Up the heavens so that there is no rain, or Command locusts to devour the land or Send a plague among MY people, 14if MY people, who are called By MY Name, will humble themselves and pray and seek MY Face and turn from their wicked ways, then I Will Hear from Heaven, and I Will Forgive their sin and Will Heal their land.

15Now MY Eyes Will Be Open and MY Ears Attentive to the prayers offered in this place. 16I Have Chosen and Consecrated this Temple so that MY Name May Be There Forever. MY Eyes and MY Heart Will Always Be there

17“As for you, if you walk Before ME faithfully as David your father did, and do all I Command, and observe MY Decrees and Laws, 18I Will Establish your royal throne, as I Covenanted with David your father when I Said, ‘You shall never fail to have a successor to rule over Israel.’

19“But if you turn away and forsake the Decrees and Commands I Have Given you and go off to serve other gods and worship them, 20then I Will Uproot Israel from MY Land, Which I Have Given them, and Will Reject this Temple I Have Consecrated for MY Name. I Will Make it a byword and an object of ridicule among all peoples.

21This Temple will become a heap of rubble. All who pass by will be appalled and say, ‘Why Has The LORD Done such a thing to this land and to this Temple?’ 22People will answer, ‘Because they have forsaken The LORD, The GOD of their ancestors, WHO Brought them Out of Egypt, and have embraced other gods, worshiping and serving them—that is Why HE Brought all this disaster on them.’ ”


The fire came down from heaven, and consumed the burnt offering - Every act of worship was accompanied by a sacrifice. The supernatural stream of fire kindled the mass of flesh, and was a token of the Divine Acceptance of Solomon's prayer (see Leviticus 9:24; 1 Kings 18:38).

The Glory of The LORD Filled the House - The cloud, which was the Symbol of GOD'S Presence and Majesty, Filled the interior of the Temple (Exodus 40:35).


The priests could not enter - Both from awe of the miraculous fire that was burning on the altar and from the dense cloud that enveloped the Sanctuary, they were unable for some time to perform their usual functions (see 1Kings 8:10). But afterwards, their courage and confidence being revived, they approached the altar and offered of an immense number of sacrifices.