JEHOVAH Gave Heman Many Children To Exalt HIM


1David, together with the commanders of the army, set apart some of the sons of Asaph, Heman and Jeduthun for the ministry of prophesying, accompanied by harps, lyres and cymbals.

Here is the list of the men who performed this service:

2From the sons of Asaph:

Zakkur, Joseph, Nethaniah and Asarelah. The sons of Asaph were under the supervision of Asaph, who prophesied under the king’s supervision.

3As for Jeduthun, from his sons:

Gedaliah, Zeri, Jeshaiah, Shimei,a Hashabiah and Mattithiah, six in all, under the supervision of their father Jeduthun, who prophesied, using the harp in thanking and praising The LORD. 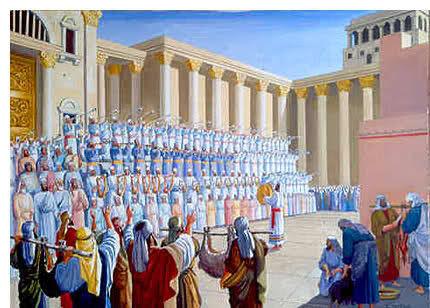 4As for Heman, from his sons:

5(All these were sons of Heman the king’s seer. They were given him through the Promises of GOD To Exalt HIM. GOD Gave Heman fourteen sons and three daughters.)

6All these men were under the supervision of their father for the music of the Temple of The LORD, with cymbals, lyres and harps, for the ministry at the House of

Asaph, Jeduthun and Heman were under the supervision of the king. 7Along with their relatives—all of them trained and skilled in music for The LORD—they numbered 288. 8Young and old alike, teacher as well as student, cast lots for their duties.


Musicians in the Temple

All these were sons of Heman the king’s seer. They were given him through the Promises of GOD To Exalt HIM. GOD Gave Heman fourteen sons and three daughters.


Asaph had four sons, Jeduthun six, and Heman fourteen, equal to twenty-four; making the musicians with their brethren the singers, an amount of two hundred eighty-eight(24 x 12 = 288). For, like the priests and Levites, they were divided into twenty-four courses of twelve men each, equal to two hundred eighty-eight, who served a week in rotation; and these, half of whom officiated every week with a proportionate number of assistants, were skillful and experienced musicians, capable of leading and instructing the general musical corps, which comprised no less than four thousand (1 Chronicles 23:5).