JEHOVAH Has Put Deceiving Spirits In The Mouths Of False Prophets

1Now Jehoshaphat had great wealth and honor, and he allied himself with Ahab by marriage.

2Some years later he went down to see Ahab in Samaria. Ahab slaughtered many sheep and cattle for him and the people with him and urged him to attack Ramoth Gilead. 3Ahab king of Israel asked Jehoshaphat king of Judah, “Will you go with me against Ramoth Gilead?”

Jehoshaphat replied, “I am as you are, and my people as your people; we will join you in the war.” 4But Jehoshaphat also said to the king of Israel,

“First seek the Counsel of The LORD.”

5So the king of Israel brought together the prophets—four hundred men—and asked them, “Shall we go to war against Ramoth Gilead, or shall I not?”

“Go,” they answered, “for GOD Will Give it into the king’s hand.”

6But Jehoshaphat asked, “Is there no longer a prophet of The LORD here whom we can inquire of?”

7The king of Israel answered Jehoshaphat, “There is still one prophet through whom we can inquire of The LORD, but I hate him because he never prophesies anything good about me, but always bad. He is Micaiah son of Imlah.”

“The king should not say such a thing,” Jehoshaphat replied.

8So the king of Israel called one of his officials and said, “Bring Micaiah son of Imlah at once.”

9Dressed in their royal robes, the king of Israel and Jehoshaphat king of Judah were sitting on their thrones at the threshing floor by the entrance of the gate of Samaria, with all the prophets prophesying before them. 10Now Zedekiah son of Kenaanah had made iron horns, and he declared, “This Is What The LORD Says: ‘With these you will gore the Arameans until they are destroyed.’ ”

11All the other prophets were prophesying the same thing. “Attack Ramoth Gilead and be victorious,” they said, “for The LORD Will Give it into the king’s hand.”

12The messenger who had gone to summon Micaiah said to him, “Look, the other prophets without exception are predicting success for the king. Let your word agree with theirs, and speak favorably.”

“As surely As The LORD Lives, I can tell him only

What my GOD Says.”

14When he arrived, the king asked him, “Micaiah, shall we go to war against Ramoth Gilead, or shall I not?”

“Attack and be victorious,” he answered, “for they will be given into your hand.”

15The king said to him, “How many times must I make you swear to tell me nothing but the truth in the Name of The LORD?”

“I saw all Israel scattered on the hills like sheep


And The LORD Said,


‘These people have no master. Let each one go home

17The king of Israel said to Jehoshaphat, “Didn’t I tell you that he never prophesies anything good about me, but only bad?” 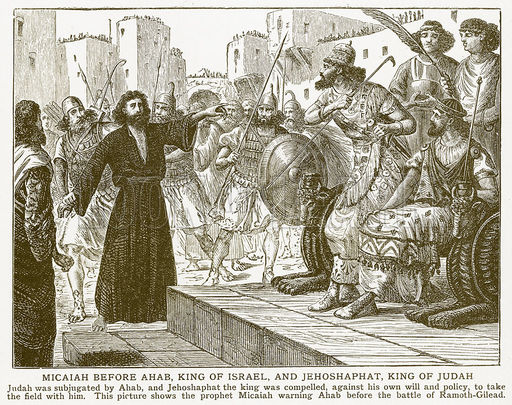 
“Therefore hear The WORD of The LORD:


I saw The LORD Sitting On HIS Throne with all the

multitudes of heaven standing on HIS Right and on


‘Who will entice Ahab king of Israel into attacking

Ramoth Gilead and going to his death there?’

“One suggested this, and another that. 20Finally, a spirit came forward, stood before The LORD and said, ‘I will entice him.’

21“ ‘I will go and be a deceiving spirit in the mouths of all his prophets,’ he said.

“ ‘You will succeed in enticing him,’

22“So now The LORD has put a deceiving spirit in the mouths of these prophets of yours. The LORD Has Decreed disaster for you.”

23Then Zedekiah son of Kenaanah went up and slapped Micaiah in the face. “Which way did the SPIRIT Froma The LORD Go when HE Went From me To Speak to you?” he asked.

24Micaiah replied, “You will find out on the day you go to hide in an inner room.”

25The king of Israel then ordered, “Take Micaiah and send him back to Amon the ruler of the city and to Joash the king’s son, 26and say, ‘This is what the king says: Put this fellow in prison and give him nothing but bread and water until I return safely.’ ”

27Micaiah declared, “If you ever return safely, The LORD Has Not Spoken Through me.” Then he added, “Mark my words, all you people!”

33But someone drew his bow at random and hit the king of Israel between the breastplate and the scale armor. The king told the chariot driver, “Wheel around and get me out of the fighting. I’ve been wounded.”

34All day long the battle raged, and the king of Israel propped himself up in his chariot facing the Arameans until evening.

Then at sunset he died. 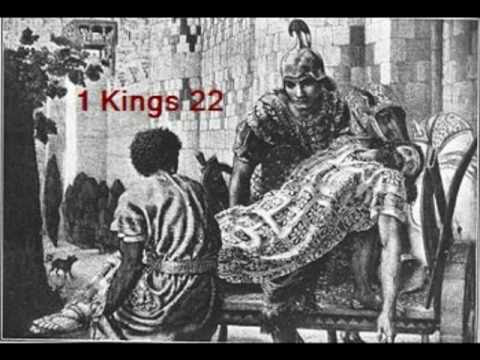 The story of this chapter we had just as it is here related in the story of the reign of Ahab king of Israel, 1 Kings 22. There it looks more creditable to Ahab than anything else recorded of him that he was in league with so good a man as Jehoshaphat; here it is a great blemish in the reign of Jehoshaphat that he thus connected himself with so bad a man as Ahab.

I. The alliance he contracted himself with Ahab (v. 1).

II. His consent to join with him in his expedition for the recovery of Remoth—Gilead out of the hands of the Syrians (v. 2, 3).

III. Their consulting with the prophets, false and true, before they went (v. 4–27).