My Help Comes From JEHOVAH my GOD!! 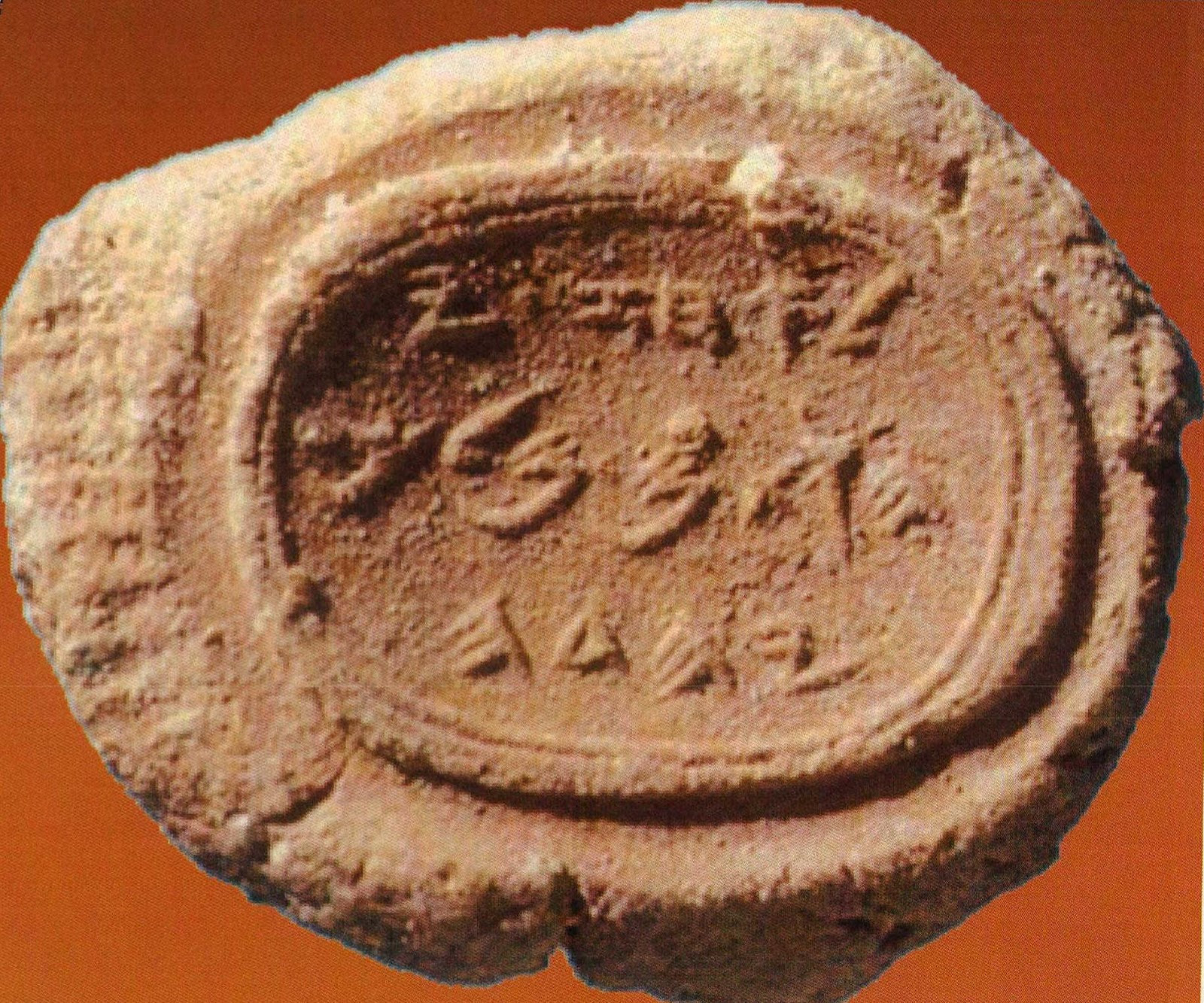 1Ahaz was twenty years old when he became king, and he reigned in Jerusalem sixteen years. Unlike David his father, he did not do what was right in the Eyes of The LORD. 2He followed the ways of the kings of Israel and also made idols for worshiping the Baals.


3He burned sacrifices in the Valley of Ben Hinnom and sacrificed his children in the fire, 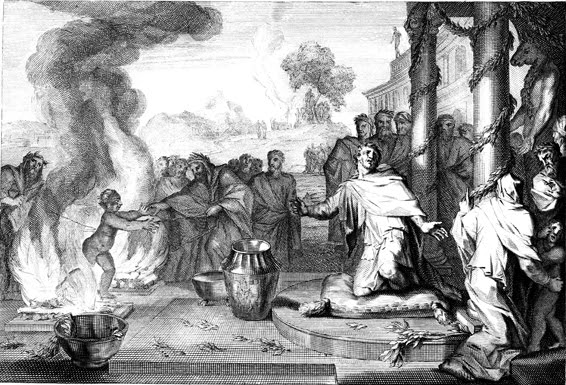 engaging in the detestable practices of the nations The LORD Had Driven Out before the Israelites.

4He offered sacrifices and burned incense at the high places, on the hilltops and under every spreading tree.

5Therefore The LORD his GOD Delivered him into the hands of the king of Aram. The Arameans defeated him and took many of his people as prisoners and brought them to Damascus. 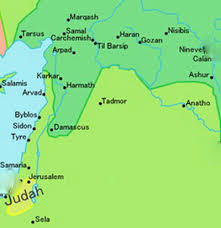 He was also given into the hands of the king of Israel, who inflicted heavy casualties on him. 6In one day Pekah son of Remaliah killed a hundred and twenty thousand soldiers in Judah—because Judah had forsaken The LORD, The GOD of their ancestors. 7Zikri, an Ephraimite warrior, killed Maaseiah the king’s son, Azrikam the officer in charge of the palace, and Elkanah, second to the king. 8The men of Israel took captive from their fellow Israelites who were from Judah two hundred thousand wives, sons and daughters. They also took a great deal of plunder, which they carried back to Samaria.

9But a prophet of The LORD named Oded was there, and he went out to meet the army when it returned to Samaria. He said to them, “Because The LORD, The GOD of your ancestors, Was Angry With Judah, HE Gave them into your hand. But you have slaughtered them in a rage that reaches to heaven. 10And now you intend to make the men and women of Judah and Jerusalem your slaves. But aren’t you also guilty of sins against The LORD your GOD? 11Now listen to me! Send back your fellow Israelites you have taken as prisoners, For The LORD'S Fierce Anger Rests On you.”

12Then some of the leaders in Ephraim—Azariah son of Jehohanan, Berekiah son of Meshillemoth, Jehizkiah son of Shallum, and Amasa son of Hadlai—confronted those who were arriving from the war.13“You must not bring those prisoners here,” they said, “or we will be guilty Before The LORD. Do you intend to add to our sin and guilt? For our guilt is already great, and His Fierce Anger Rests On Israel.”

14So the soldiers gave up the prisoners and plunder in the presence of the officials and all the assembly.15The men designated by name took the prisoners, and from the plunder they clothed all who were naked. They provided them with clothes and sandals, food and drink, and healing balm. All those who were weak they put on donkeys. So they took them back to their fellow Israelites at Jericho, the City of Palms, and returned to Samaria.

16At that time King Ahaz sent to the kingsa of Assyria for help.

17The Edomites had again come and attacked Judah and carried away prisoners, 18while the Philistines had raided towns in the foothills and in the Negev of Judah. They captured and occupied Beth Shemesh, Aijalon and Gederoth, as well as Soko, Timnah and Gimzo, with their surrounding villages. 19The LORD Had Humbled Judah because of Ahaz king of Israel,bfor he had promoted wickedness in Judah and had been most unfaithful To The LORD. 20Tiglath-Pileserc king of Assyria came to him, but he gave him trouble instead of help.


21Ahaz took some of the things from the Temple of The LORD and from the royal palace and from the officials and presented them to the king of Assyria, but that did not help him. 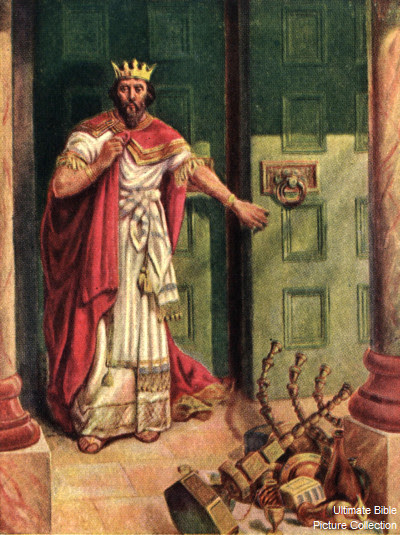 22In his time of trouble King Ahaz became even more unfaithful To The LORD. 23He offered sacrifices to the gods of Damascus, who had defeated him; for he thought, “Since the gods of the kings of Aram have helped them, I will sacrifice to them so they will help me.” But they were his downfall and the downfall of all Israel.

24Ahaz gathered together the furnishings from The Temple of GOD and cut them in pieces. He shut the doors of The LORD'S Temple and set up altars at every street corner in Jerusalem. 25In every town in Judah he built high places to burn sacrifices to other gods and aroused the Anger of The LORD, The GOD of his ancestors.

26The other events of his reign and all his ways, from beginning to end, are written in the book of the kings of Judah and Israel. 27Ahaz rested with his ancestors and was buried in the city of Jerusalem, but he was not placed in the tombs of the kings of Israel. And Hezekiah his son succeeded him as king.


This chapter is the history of the reign of Ahaz the son of Jotham; a bad reign it was, and which helped to augment the fierce Anger of JEHOVAH.

III. The reproof which GOD Sent by a prophet to the army of Israel for trampling upon their brethren of Judah, and the obedient ear they gave to that reproof (v. 9–15).

1Hezekiah was twenty-five years old when he became king, and he reigned in Jerusalem twenty-nine years. His mother’s name was Abijah daughter of Zechariah. 2He did what was right in The Eyes of The LORD, just as his father David had done.

3In the first month of the first year of his reign, he opened the doors of The Temple of The LORD and repaired them. 4He brought in the priests and the Levites, assembled them in the square on the east side 5and said: “Listen to me, Levites! Consecrate yourselves now and consecrate The Temple of The LORD, The GOD of your ancestors. Remove all defilement from the sanctuary. 6Our parents were unfaithful; they did evil in The Eyes of The LORD our GOD and forsook HIM. They turned their faces away from The LORD'S Dwelling Place and turned their backs On HIM.

7They also shut the doors of the portico and put out the lamps. They did not burn incense or present any burnt offerings at the sanctuary to The GOD of Israel. 8Therefore, the Anger of The LORD Has Fallen on Judah and Jerusalem; HE Has Made them an object of dread and horror and scorn, as you can see with your own eyes. 9This is why our fathers have fallen by the sword and why our sons and daughters and our wives are in captivity. 10Now I intend to make a covenant with The LORD, The GOD of Israel, so that HIS Fierce Anger Will Turn Away from us. 11My sons, do not be negligent now, for The LORD Has Chosen you to stand Before HIM and Serve HIM, to minister Before HIM and to burn incense.”

15When they had assembled their fellow Levites and consecrated themselves, they went in to purify The Temple of The LORD, as the king had ordered, following the word of the Lord. 16The priests went into the Sanctuary of The LORD to purify it. They brought out to the courtyard of The LORD'S Temple everything unclean that they found in The Temple of The LORD. The Levites took it and carried it out to the Kidron Valley. 17They began the consecration on the first day of the first month, and by the eighth day of the month they reached the Portico of The LORD. For eight more days they consecrated the temple of the Lord itself, finishing on the sixteenth day of the first month.

18Then they went in to King Hezekiah and reported: “We have purified the entire Temple of The LORD, the altar of burnt offering with all its utensils, and the table for setting out the consecrated bread, with all its articles. 19We have prepared and consecrated all the articles that King Ahaz removed in his unfaithfulness while he was king. They are now in front of The LORD'S Altar.”

20Early the next morning King Hezekiah gathered the city officials together and went up to The Temple of The LORD. 21They brought seven bulls, seven rams, seven male lambs and seven male goats as a sin offering a for the kingdom, for the sanctuary and for Judah. The king commanded the priests, the descendants of Aaron, to offer these on The Altar of The LORD.

25He stationed the Levites in the Temple of The LORD with cymbals, harps and lyres in the way prescribed by David and Gad the king’s seer and Nathan the prophet; this was commanded by The LORD through HIS prophets. 26So the Levites stood ready with David’s instruments, and the priests with their trumpets.

27Hezekiah gave the order to sacrifice the burnt offering on the altar. As the offering began, singing to The LORD began also, accompanied by trumpets and the instruments of David king of Israel. 28The whole assembly bowed in worship, while the musicians played and the trumpets sounded. All this continued until the sacrifice of the burnt offering was completed.

29When the offerings were finished, the king and everyone present with him knelt down and worshiped. 30King Hezekiah and his officials ordered the Levites to praise The LORD with the words of David and of Asaph the seer. So they sang praises with gladness and bowed down and worshiped.

So the service of The Temple of The LORD Was Reestablished. 36Hezekiah and all the people rejoiced at what GOD Had Brought about for HIS people, because it was done so quickly.