Nehemiah The Cupbearer To Artaxerxes, King Of Persia

1The words of Nehemiah son of Hakaliah:

In the month of Kislev in the twentieth year, while I was in the citadel of Susa, 2Hanani, one of my brothers, came from Judah with some other men, and I questioned them about the Jewish remnant that had survived the exile, and also about Jerusalem.

3They said to me, “Those who survived the exile and are back in the province are in great trouble and disgrace. The wall of Jerusalem is broken down, and its gates have been burned with fire.”

4When I heard these things, I sat down and wept. For some days I mourned and fasted and prayed Before The GOD of Heaven.

“LORD, The GOD of Heaven, The Great and Awesome GOD, WHO Keeps HIS Covenant of Love with those who love HIM and keep HIS Commandments, 6Let YOUR Ear Be Attentive and YOUR Eyes Open To Hear the prayer YOUR servant is praying Before YOU day and night for YOUR servants, the people of Israel. I confess the sins we Israelites, including myself and my father’s family, have committed against YOU. 7We have acted very wickedly toward YOU. We have not obeyed the Commands, Decrees and Laws YOU Gave YOUR servant Moses.

8“Remember the instruction YOU Gave YOUR servant Moses, saying, ‘If you are unfaithful, I Will Scatter you among the nations, 9but if you return to ME and obey MY Commands, then even if your exiled people are at the farthest horizon, I Will Gather them from there and Bring them to the place I Have Chosen as a Dwelling for MY Name.’

I was cupbearer to the king. 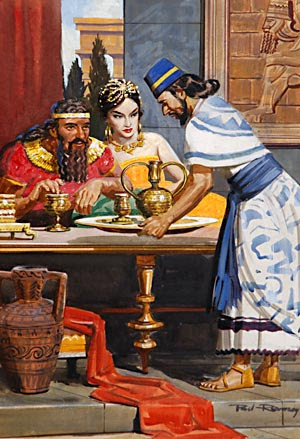 In the 20th year of Artaxerxes, king of Persia, (445/444 BC), Nehemiah was cup-bearer to the king. Learning that the walls of Jerusalem were broken down he asked the king for permission to return and rebuild them, and Artaxerxes sent him to Judah as governor of the province with a mission to rebuild the walls.

Appearing in the Queen's presence (Nehemiah 2:6) may indicate his being a eunuch, and in the Septuagint, the Greek translation of the Hebrew Bible, he is described as such: eunochos (eunuch), rather than oinochoos (wine-cup-bearer). If so the attempt by his enemy Shemaiah to trick him into entering the Temple is aimed at making him break Jewish law( an eunuch is not allowed to go in the Temple), rather than simply hide from assassins. 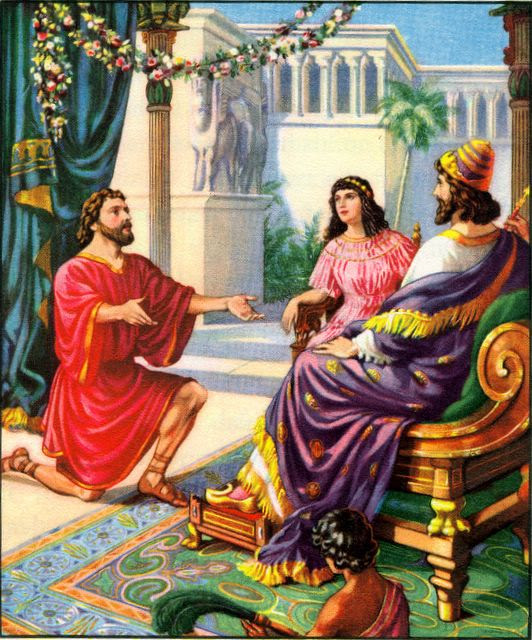 He then took measures to repopulate the city and purify the Jewish community, enforcing the cancellation of debt, assisting Ezra to promulgate the Law of Moses, and enforcing the divorce of Jewish men from their non-Jewish wives.

After 12 years as governor, during which he ruled with justice and righteousness, he returned to the king in Susa. After some time in Susa he returned to Jerusalem, only to find that the people had fallen back into their evil ways. Non-Jews were permitted to conduct business inside Jerusalem on the Sabbath and to keep rooms in the Temple. Greatly angered, he purified the Temple and the priests and Levites and enforced the observance of the Law of Moses.