Rehoboam And His People Did Evil In The Sight of JEHOVAH

1After Rehoboam’s position as king was established and he had become strong, he and all Israela with him abandoned the Law of The LORD. 2Because they had been unfaithful to The LORD, Shishak king of Egypt attacked Jerusalem in the fifth year of King Rehoboam. 3With twelve hundred chariots and sixty thousand horsemen and the innumerable troops of Libyans, Sukkites and Cushitesb that came with him from Egypt, 4he captured the fortified cities of Judah and came as far as Jerusalem.

5Then the prophet Shemaiah came to Rehoboam and to the leaders of Judah who had assembled in Jerusalem for fear of Shishak, and he said to them,

“This Is What The LORD Says,

‘You have abandoned ME; therefore, I

Now Abandon you to Shishak.’ ”

6The leaders of Israel and the king humbled themselves and said,

7When The LORD saw that they humbled themselves,

this WORD of The LORD Came to Shemaiah:

“Since they have humbled themselves, I Will Not Destroy them but Will Soon Give them deliverance. MY Wrath Will Not Be Poured Out on Jerusalem through Shishak. 8 They will, however, become subject to him, so that they may learn the difference between serving ME and serving the kings of other lands.”

9When Shishak king of Egypt attacked Jerusalem, he carried off the treasures of the Temple of The LORD and the treasures of the royal palace. He took everything, including the gold shields Solomon had made. 10So King Rehoboam made bronze shields to replace them and assigned these to the commanders of the guard on duty at the entrance to the royal palace. 11Whenever the king went to The LORD'S Temple, the guards went with him, bearing the shields, and afterward they returned them to the guardroom.

12Because Rehoboam humbled himself, The LORD'S Anger Turned From him, and he was not totally destroyed. Indeed, there was some good in Judah.

13King Rehoboam established himself firmly in Jerusalem and continued as king. He was forty-one years old when he became king, and he reigned seventeen years in Jerusalem, the city The LORD Had Chosen out of all the tribes of Israel in which to put HIS Name. His mother’s name was Naamah; she was an Ammonite. 14He did evil because he had not set his heart on seeking The LORD.

15As for the events of Rehoboam’s reign, from beginning to end, are they not written in the records of Shemaiah the prophet and of Iddo the seer that deal with genealogies? There was continual warfare between Rehoboam and Jeroboam. 16Rehoboam rested with his ancestors and was buried in the City of David. And Abijah his son succeeded him as king.


This chapter gives us a more full account of the reign of Rehoboam than we had before in Kings and it is a very melancholy account. We feel that we are in the Book of Judges again, for;

I. Rehoboam and his people did evil in the Sight of JEHOVAH (v. 1).

II. GOD Sold them into the hands of Shishak, king of Egypt, who greatly oppressed them (v. 2-4) 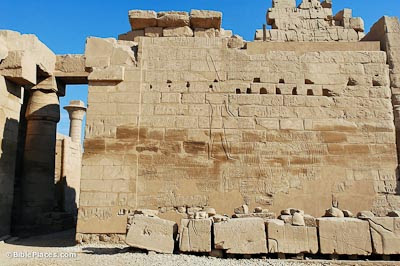 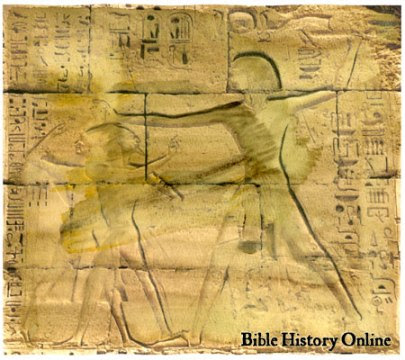 
(Pharaoh Shishak (945-924 BC) invaded Israel and Judah in 925 BC and carried off the treasures of Jerusalem's Temple. The Bible records the attack from Judah's perspective (2 Chr 12), but Shishak's list gives much greater detail including the names of 150 cities, most of which cannot be located today. Scholars debate how to read this inscription, but most agree that the following cities are mentioned: Taanach, Beth-Shean, Rehob, Mahanaim, Gibeon, Beth-Horon, Megiddo, and Arad.)

III. GOD Sent a prophet to them, to warn them of HIS Judgment and to call them to repentance (v. 5).


Lastly, here is a general character of Rehoboam and his reign, with the conclusion of it (v. 13–16).