The Divisions of Priests

The Divisions of Priests


1These were the divisions of the descendants of Aaron: 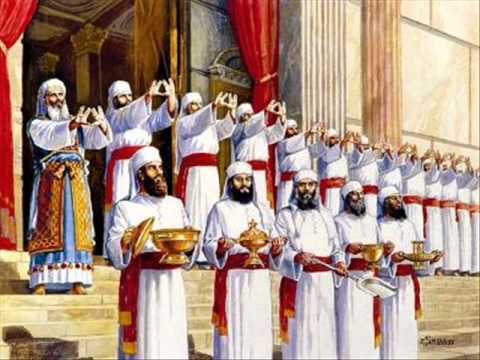 6The scribe Shemaiah son of Nethanel, a Levite, recorded their names in the presence of the king and of the officials: Zadok the priest, Ahimelek son of Abiathar and the heads of families of the priests and of the Levites—one family being taken from Eleazar and then one from Ithamar.

7The first lot fell to Jehoiarib,
the second to Jedaiah,
8the third to Harim,
the fourth to Seorim,
9the fifth to Malkijah,
the sixth to Mijamin,
10the seventh to Hakkoz,
the eighth to Abijah,
11the ninth to Jeshua,
the tenth to Shekaniah,
12the eleventh to Eliashib,
the twelfth to Jakim,
13the thirteenth to Huppah,
the fourteenth to Jeshebeab,
14the fifteenth to Bilgah,
the sixteenth to Immer,
15the seventeenth to Hezir,
the eighteenth to Happizzez,
16the nineteenth to Pethahiah,
the twentieth to Jehezkel,
17the twenty-first to Jakin,
the twenty-second to Gamul,
18the twenty-third to Delaiah
and the twenty-fourth to Maaziah.

19This was their appointed order of ministering when they entered the Temple of The LORD, according to the regulations prescribed for them by their ancestor Aaron, as The LORD, The GOD of Israel, Had Commanded him.

The Rest of the Levites


20As for the rest of the descendants of Levi:

These were the Levites, according to their families. 31They also cast lots, just as their relatives the descendants of Aaron did, in the presence of King David and of Zadok, Ahimelek, and the heads of families of the priests and of the Levites. The families of the oldest brother were treated the same as those of the youngest.


In consequence of the death of his two oldest sons without children, the descendants of Aaron were comprised in the families of Eleazar and Ithamar. Both of these sons discharged the priestly functions as assistants to their father. Eleazar succeeded him, and in his line the high priesthood continued until it was transferred to the family of Ithamar, in the person of Eli.

Zadok and Ahimelech of the sons of Ithamar - This statement, taken in connection with 1Chronicles 24:6, is not a little perplexing, since (2 Samuel 15:24, 35; 20:25) Abiathar is mentioned as the person conjoined in David's time with Zadok, in the collegiate exercise of the high priesthood.

Some think that the words have been transposed, reading Abiathar, the son of Ahimelech. But there is no ground for regarding the text as faulty. The high priests of the line of Ithamar were the following: Ahiah or Ahimelech, his son Abiathar, his son Ahimelech. We frequently find the grandfather and grandson called by the same name (see list of high priests of the line of Eleazar, 1 Chronicles 6:30-41).

The author of the Chronicles was acquainted with Ahimelech, son of Abiathar, who, for some reason, discharged the duties of high priest in David's reign, and during the lifetime of his father (for Abiathar was living in the time of Solomon, 1 Kings 2:27).