I trust in GOD'S Unfailing Love for ever and ever

For the director of music. A maskilb of David. When Doeg the Edomite had gone to Saul and told him: “David has gone to the house of Ahimelek.”


1Why do you boast of evil, you mighty hero?
Why do you boast all day long,
you who are a disgrace in The Eyes of GOD?
2You who practice deceit,
your tongue plots destruction;
it is like a sharpened razor.
3You love evil rather than good,
falsehood rather than speaking the truth.c
4You love every harmful word,
you deceitful tongue!

5Surely GOD Will Bring you Down to everlasting ruin:
HE Will Snatch you Up and Pluck you from your tent;
HE Will Uproot you from the land of the living.
6The righteous will see and fear;
they will laugh at you, saying,
7“Here now is the man
who did not make GOD his stronghold
but trusted in his great wealth
and grew strong by destroying others!”

8But I am like an olive tree
flourishing in The House of GOD; 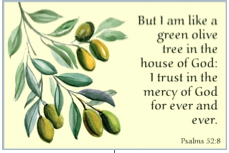 I trust in GOD'S Unfailing Love
for ever and ever.
9For What YOU Have Done I will always praise YOU
in the presence of YOUR faithful people.
And I will hope In YOUR Name,
For YOUR Name Is Good.

The background story of  Psalm 52 upon which

occasion it was penned is recorded as below.


David at Adullam and Mizpah

1David left Gath and escaped to the cave of Adullam. When his brothers and his father’s household heard about it, they went down to him there. 2All those who were in distress or in debt or discontented gathered around him, and he became their commander. About four hundred men were with him.

3From there David went to Mizpah in Moab and said to the king of Moab, “Would you let my father and mother come and stay with you until I learn what GOD will do for me?” 4So he left them with the king of Moab, and they stayed with him as long as David was in the stronghold.

5But the prophet Gad said to David, “Do not stay in the stronghold. Go into the land of Judah.” So David left and went to the forest of Hereth.

Saul Kills the Priests of Nob

6Now Saul heard that David and his men had been discovered. And Saul was seated, spear in hand, under the tamarisk tree on the hill at Gibeah, with all his officials standing at his side. 7He said to them, “Listen, men of Benjamin! Will the son of Jesse give all of you fields and vineyards? Will he make all of you commanders of thousands and commanders of hundreds? 8Is that why you have all conspired against me? No one tells me when my son makes a covenant with the son of Jesse. None of you is concerned about me or tells me that my son has incited my servant to lie in wait for me, as he does today.”

9But Doeg the Edomite, who was standing with Saul’s officials, said, “I saw the son of Jesse come to Ahimelek son of Ahitub at Nob.10Ahimelek inquired of The Lord for him; he also gave him provisions and the sword of Goliath the Philistine.”

11Then the king sent for the priest Ahimelek son of Ahitub and all the men of his family, who were the priests at Nob, and they all came to the king. 12Saul said, “Listen now, son of Ahitub.”

13Saul said to him, “Why have you conspired against me, you and the son of Jesse, giving him bread and a sword and inquiring of God for him, so that he has rebelled against me and lies in wait for me, as he does today?”

14Ahimelek answered the king, “Who of all your servants is as loyal as David, the king’s son-in-law, captain of your bodyguard and highly respected in your household? 15Was that day the first time I inquired of GOD for him? Of course not! Let not the king accuse your servant or any of his father’s family, for your servant knows nothing at all about this whole affair.”

16But the king said, “You will surely die, Ahimelek, you and your whole family.”
17Then the king ordered the guards at his side: “Turn and kill the priests of The LORD, because they too have sided with David. They knew he was fleeing, yet they did not tell me.”

But the king’s officials were unwilling to raise a hand to strike the priests of The LORD.

18The king then ordered Doeg, “You turn and strike down the priests.” So Doeg the Edomite turned and struck them down. That day he killed eighty-five men who wore the linen ephod. 19He also put to the sword Nob, the town of the priests, with its men and women, its children and infants, and its cattle, donkeys and sheep.

20But one son of Ahimelek son of Ahitub, named Abiathar, escaped and fled to join David. 21He told David that Saul had killed the priests of The LORD. 22Then David said to Abiathar, “That day, when Doeg the Edomite was there, I knew he would be sure to tell Saul. I am responsible for the death of your whole family. 23Stay with me; don’t be afraid. The man who wants to kill you is trying to kill me too. You will be safe with me.” 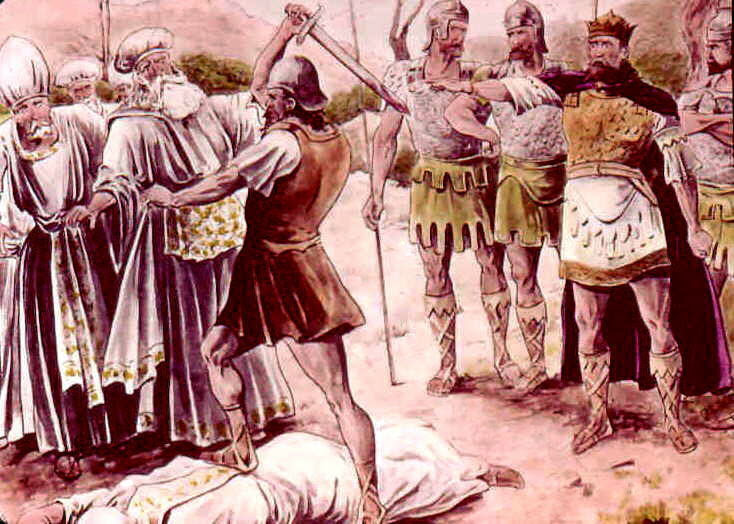 David, no doubt, was in very great grief when he said to Abiathar (1 Samuel 22:22), "I am responsible for the death of all the persons of thy father's house," who were put to death upon Doeg's malicious information. To give some vent to that grief, and to gain some relief to his mind under it, he penned this psalm;

IV. He foretells the triumphs of the righteous in the execution of the sentence (v. 6, 7).

V. He comforts himself in the Mercy of GOD and the assurance he had that he should yet praise HIM (v. 8, 9).

In singing this Psalm we should have a detestation of the sin of lying, foresee the ruin of those that persist in it, and please ourselves with the assurance of the preservation of GOD'S church and people, in spite of all the malicious designs of the children of satan, that father of lies.