Let The Redeemed Of JESUS Tell Their Story

1Give Thanks To The LORD, For HE Is Good;
HIS Love Endures forever.

2Let the redeemed of The LORD tell their story—

those HE Redeemed from the hand of the foe,

3those HE Gathered from the lands,

from east and west, from north and south.

15Let them give Thanks To The LORD For HIS Unfailing Love
and HIS Wonderful Deeds for mankind, 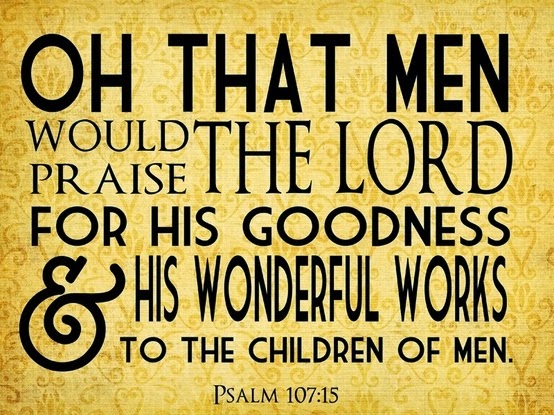 16For HE Breaks Down gates of bronze
and Cuts through bars of iron.
17Some became fools through their rebellious ways
and suffered affliction because of their iniquities.
18They loathed all food
and drew near the gates of death.
19Then they cried to The LORD in their trouble,
and HE Saved them from their distress.

20HE Sent Out HIS WORD and Healed them;
HE Rescued them from the grave.

21Let them give Thanks To The LORD For HIS Unfailing Love
and HIS Wonderful Deeds for mankind.
22Let them sacrifice thank offerings
and tell of His Works with songs of joy.
23Some went out on the sea in ships;
they were merchants on the mighty waters.
24They saw the Works of The LORD,
His Wonderful Deeds in the deep.
25For HE Spoke and Stirred Up a tempest
that Lifted high the waves.
26They mounted up to the heavens and went down to the depths;
in their peril their courage melted away.
27They reeled and staggered like drunkards;
they were at their wits’ end.


28Then they cried out to The LORD in their trouble,
and HE Brought them out of their distress.

29HE Stilled the storm to a whisper;
the waves of the sea were hushed. 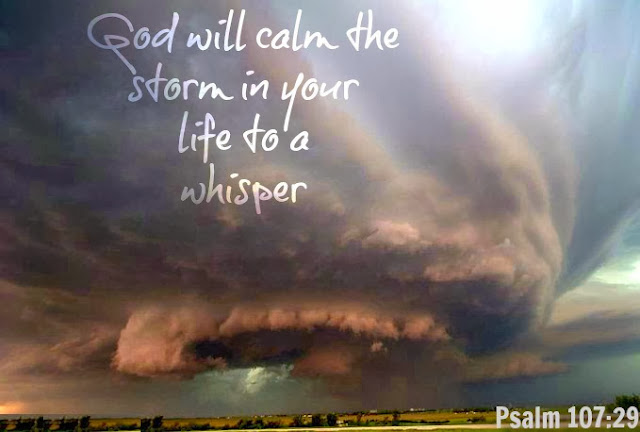 30They were glad when it grew calm,
and HE Guided them to their desired haven. 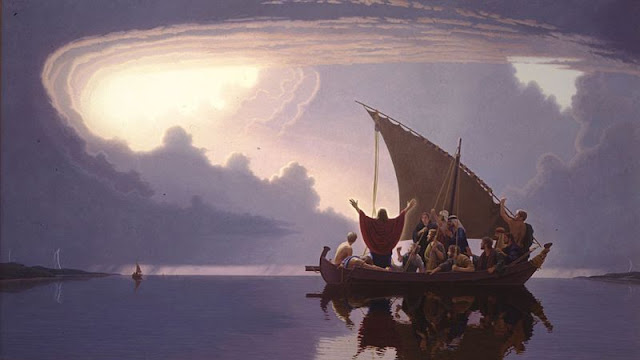 31Let them give Thanks To The LORD For HIS Unfailing Love
and HIS Wonderful Deeds for mankind.
32Let them Exalt HIM in the assembly of the people
and Praise HIM in the council of the elders.
33HE Turned rivers into a desert,
flowing springs into thirsty ground,
34and fruitful land into a salt waste,
because of the wickedness of those who lived there.

35HE Turned the desert into pools of water
and the parched ground into flowing springs; 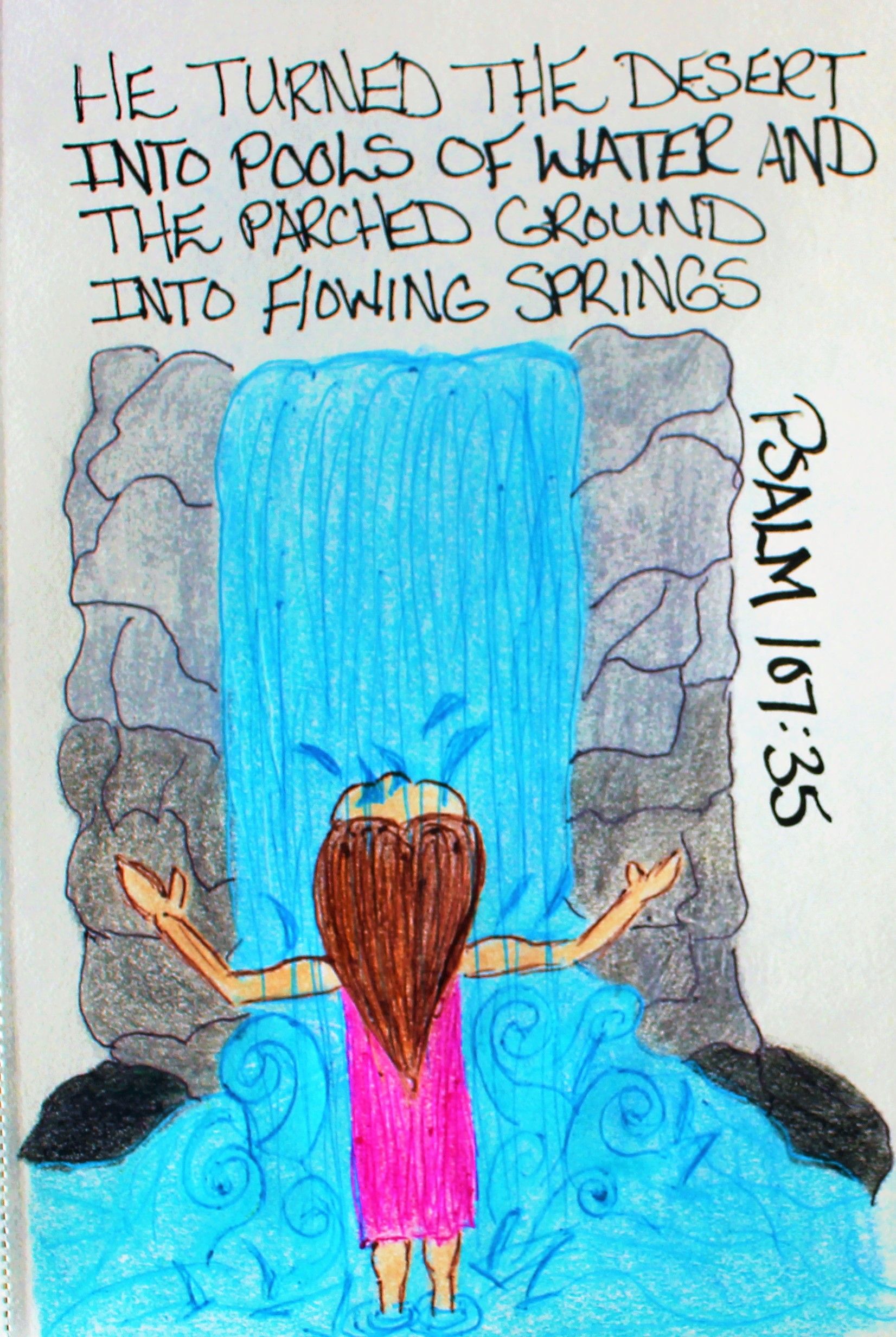 36there HE Brought the hungry to live,
and they founded a city where they could settle.
37They sowed fields and planted vineyards
that yielded a fruitful harvest;
38HE Blessed them, and their numbers greatly increased,
and HE Did Not Let their herds diminish.
39Then their numbers decreased, and they were humbled
by oppression, calamity and sorrow;
40HE WHO Pours contempt on nobles
Made them wander in a trackless waste.
41But HE Lifted the needy out of their affliction
and increased their families like flocks.
42The upright see and rejoice,
but all the wicked shut their mouths.
43Let the one who is wise heed these things
and ponder the Loving Deeds of The LORD.


NOTWITHSTANDING the division of Books which separates this Psalm from the two preceding, it is a pendant to these.

The "gathering from among the heathen" prayed for in Psalm 106:41 has here come to pass (Psalm 107:3). The thanksgiving which there is regarded as the purpose of that restoration is here rendered for it. Psalm 105:1-45 had for theme GOD’S Mercies to the fathers. Psalm 106:1-48 confessed the hereditary faithlessness of Israel and its chastisement by calamity and exile.

Psalm 107:1-43 begins with summoning Israel as "the redeemed of JEHOVAH," to Praise HIM For HIS Enduring Lovingkindness in Bringing them back from bondage, and then takes a wider flight, and celebrates the loving Providence which delivers, in all varieties of peril and calamity, those who cry to GOD.

Its vivid pictures of distress and rescue begin, indeed, with one which may fairly be supposed to have been suggested by the incidents of the return from exile; and the second of these, that of the liberated prisoners, is possibly colored by similar reminiscences; but the great restoration is only the starting point, and the bulk of the psalm goes further afield.

Its instances of Divine Deliverance, though cast into narrative form, describe not specific acts, but GOD’S uniform way of working. Wherever there are trouble and trust, there will be triumph and praise. The psalmist is propounding a partial solution of the old problem-the existence of pain and sorrow. They come as chastisements. If terror or misery drive men to GOD, GOD Answers, and deliverance is assured, from which fuller-toned praise should spring.

It is by no means a complete vindication of Providence, and experience does not bear out the assumption of uniform answers to prayers for deliverance from external calamities, which was more warranted Before CHRIST than it is now; but the essence of the psalmist’s faith is ever true-that GOD Hears the cry of a man driven to cry by crushing burdens, and will give him strength to bear and profit by them, Even If HE Does Not Take them Away.


The psalm passes before us a series of pictures, all alike in the disposition of their parts, and selected from the sad abundance of troubles which attack humanity. Travelers who have lost their way, captives, sick men, storm-tossed sailors, make a strangely miscellaneous company, the very unlikeness of which suggest the width of the ocean of human misery. The artistic regularity of structure in all the four strophes relating to these cannot escape notice. But it is more than artistic. Whatever be a man’s trouble, there is but one way out of it-to cry to GOD. That way is never vain. Always deliverance comes, and always the obligation of praise lies on the "redeemed of JEHOVAH."