A Prophecy Against Cush(Now Ethiopia)


A Prophecy Against Cush


1Woe to the land of whirring wingsa
along the rivers of Cush,b

2which sends envoys by sea
in papyrus boats over the water. Go, swift messengers,
to a people tall and smooth-skinned,
to a people feared far and wide,
an aggressive nation of strange speech,
whose land is divided by rivers.
3All you people of the world,
you who live on the earth,
when a banner is raised on the mountains,
you will see it,
and when a trumpet sounds,
you will hear it.

4This is What The LORD Says To me:

“I Will Remain Quiet and Will Look On from MY Dwelling Place,
like shimmering heat in the sunshine,
like a cloud of dew in the heat of harvest.”

5For, before the harvest, when the blossom is gone
and the flower becomes a ripening grape,
HE Will Cut Off the shoots with pruning knives,
and Cut Down and Take Away the spreading branches. 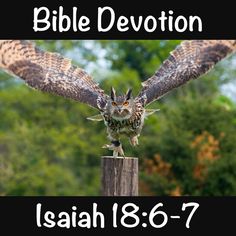 This chapter contains a very obscure prophecy; possibly designed to give the Jews, and perhaps the Egyptians, whose country is supposed to be meant, Isaiah 18:1, Isaiah 18:2, and with whom many Jews resided, an indignation of GOD'S Interposition in favor of Zion, Isaiah 18:3, Isaiah 18:4; and of HIS Counsels in regard to the destruction of their common enemy, Sennacherib, whose vast army, just as he  thought his projects ripe, and ready to be crowned with success, Isaiah 18:5, should become a prey to the beasts of the field, and to the fowls of heaven, Isaiah 18:6; and that Egypt should be grateful to GOD for the deliverance vouchsafed her, Isaiah 18:7.

This is one of the most obscure prophecies in the whole Book of Isaiah. The subject of it, the end and design of it, the people to whom it is addressed, the history to which it belongs, the person who sends the messengers, and the nation to whom the messengers are sent, are all obscure.