The LORD Has Laid On HIM the iniquity of us all

1Who has believed our message

And to whom has the Arm of The LORD Been Revealed?

2HE Grew Up before HIM like a tender shoot,

HE Had no beauty or majesty to attract us to him,

Nothing in HIS Appearance that we should desire HIM.

3HE Was Despised and Rejected by mankind,

A man of suffering, and familiar with pain.

HE Was Despised, and we held HIM in low esteem.

4Surely he took up our pain

And bore our suffering,

Yet we considered HIM Punished By GOD,

Stricken By HIM, and Afflicted.

5But HE Was Pierced for our transgressions,

HE Was Crushed for our iniquities;

The punishment that brought us peace was on HIM,

And by HIS Wounds we are healed. 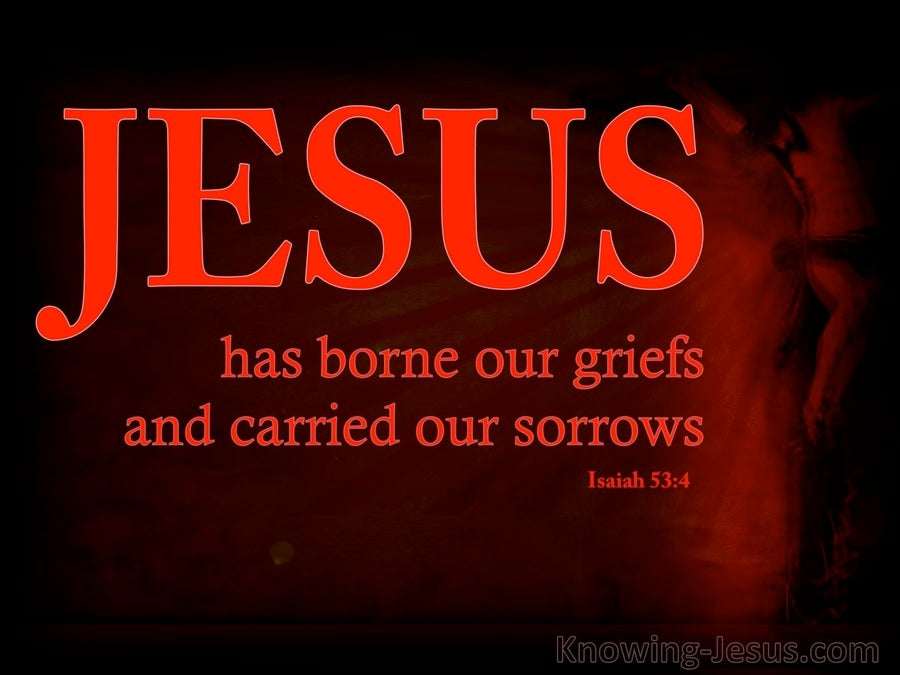 Each of us has turned to our own way; 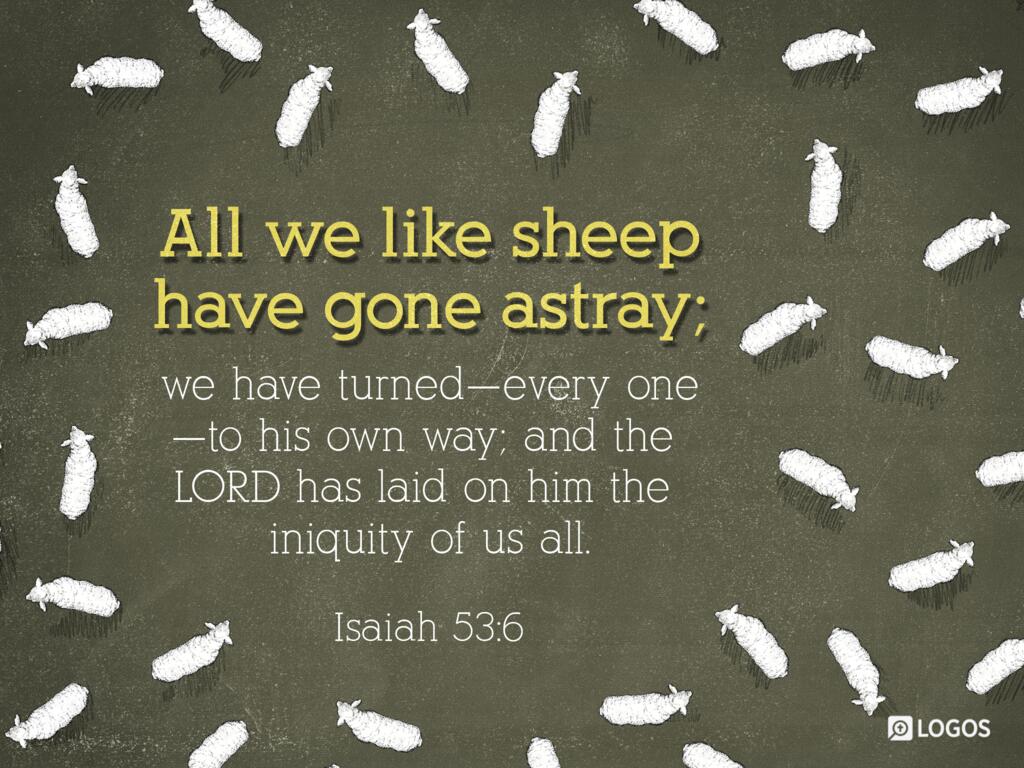 And The LORD Has Laid on HIM

the iniquity of us all.

7HE Was Oppressed and Afflicted,

Yet HE Did Not Open HIS Mouth;

HE Was Led like a lamb to the slaughter,

And as a sheep before its shearers is silent,

so HE Did Not Open HIS Mouth.

8By oppression and judgment HE Was Taken Away.

Yet who of HIS generation protested?

For HE Was Cut Off from the land of the living;

For the transgression of my people HE Was

9HE Was Assigned a grave with the wicked,

And with the rich in HIS Death,

though HE Had Done no violence,

nor was any deceit in HIS Mouth.

10Yet it was The LORD'S Will to Crush HIM and

Cause HIM to Suffer,

And though The LORD Makes HIS Life an offering

HE Will See HIS Offspring and Prolong HIS Days,

And The Will of The LORD Will Prosper in HIS

11After HE Has Suffered,

HE Wll See the light of life and Be Satisfied ;

By HIS Knowledge MY Righteous Servant Will

And HE Will Bear their iniquities.

12Therefore I Will Give HIM a portion among the

And HE Will Divide the spoils with the strong,

because HE Poured Out HIS Life unto death,

And Was Numbered with the transgressors.

For HE Bore the sin of many,

And Made intercession for the transgressors.

Luke 22:28 reminds us that JESUS Was Familiar with suffering, as Isaiah 53:3 noted. Yet, as John 14:27; 15:11; and 16:33 stress, JESUS Turned all HIS adversity into victory by Submitting it to GoOD'S Will. HE Knew the cost imposed by ministering (Luke 8:46), but Never Whimpered or Complained about how tough life had been, or if HE Had Known it would cost so much, HE Wouldn't Have Come. Instead, at the end, as HE Had throughout HIS Life, HE Bequeathed HIS JOY and PEACE to them and us. 1 Corinthians 1:23 expresses the Jewish viewpoint stated in Isaiah 53:4, ". . .yet we considered HIM Stricken by GOD, Smitten by HIM, and Afflicted." Indeed, following GOD'S Clear Condemnation of the crucified (Deuteronomy 21:22-23), most Jews saw CHRIST'S Death as GOD'S Punishment for leading people astray (John 7:12-13). Luke 19:10, Mark 10:45, 1 Peter 1:18-19, and Revelation 5:6, 9 fulfill Isaiah 53:5-6: "HE Was Pierced for our transgressions, HE Was Crushed for our iniquities; the punishment that brought us peace was upon HIM, and by HIS Wounds we are healed. We all, like sheep, have gone astray, each of us has turned to his own way; and The LORD Has Laid on HIM the iniquity of us all." That gives particular piquancy to the charge of Jewish leaders strutting before the Cross: "HE Saved others, but HE Can't Save HIMSELF" (Luke 23:35). In reality, HE Saved others because HE Wouldn't Save HIMSELF - the essence of Isaiah 53:5, "the punishment that brought us peace was upon HIM." 1 Peter 2:24 quotes Isaiah 53:5, "By HIS Wounds we are healed," and 1 Peter 2:25 refers to Isaiah 53:6, "We all, like sheep, have gone astray." Luke 23:9, Mark 14:61a, 15:5 and 1 Peter 2:23 all are commentaries on Isaiah 53:7: JESUS Kept Silent before Herod, before Caiphas until the High Priest put HIM on oath and before Pilate when the leaders viciously attacked HIM. Luke 23:32-33 and 23:50-53 fulfill Isaiah 53:9, "HE Was aAsigned a grave with the wicked, and with the rich in HIS Death. . ." Hebrews 5:8 fulfills Isaiah 53:10, "Yet it was the LORD'S Will to Crush HIM and Cause HIM to Suffer. . ." Mark 3:31-35 refers to Isaiah 53:8, "And who can speak of HIS Descendants?" While JESUS Had only a small spiritual family while in ministry, Philippians 2:9-11, Ephesians 1:20-23, and Revelation 5:8-14 detail countless descendants after completing HIS Sufferings and Rising from the grave, the meaning of Isaiah 53:10c-12, "HE Will see HIS Offspring. . .MY Righteous Servant Will Justify many." Isaiah 53 refers to JESUS CHRIST because the earliest church leaders used it in teaching inquirers about CHRIST. Acts 8:26-40 relates one story. The HOLY SPIRIT Directed the evangelist Philip to travel a desert road, then directed him to a particular chariot in which an Ethiopian eunuch sat reading Isaiah 53 - and the instant Philip came alongside the chariot the man had his finger on verses 7-8. When Philip asked if he understood the words, the eunuch invited him to explain them. Luke records the grand response: "Then Philip began with that very passage of Scripture and told him the good news about JESUS" (Acts 8:35). Using an unquestionably messianic reference, Philip preached JESUS as the unquestionable Messiah of the passage. We can find JESUS in many Old Testament texts, but none more clearly than Isaiah, the 8th century B.C. preacher. He's often called The Gospel Prophet because he's quoted in the New Testament more times than any from the Old Covenant, and none more fully than Isaiah 53.

The LAMB of GOD 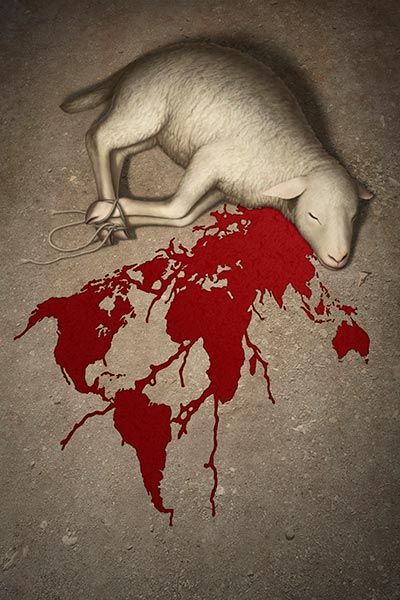 We have all sinned and deserve GOD'S Judgment. GOD, The FATHER, Sent HIS ONLY SON to Satisfy that judgment for those who believe in HIM. JESUS, The Creator and Eternal SON of GOD, WHO Lived a sinless life, Loves us so much that HE Died for our sins, Taking the punishment that we deserve, Was Buried, and Rose from the dead according to The Bible.


If you truly believe and trust this in your heart, receiving JESUS alone as your SAVIOR, declaring, "JESUS Is LORD," you will be saved from judgment and spend eternity with GOD in Heaven.