The Remnant Of Israel Will Return To JESUS In That Day

1Nevertheless, there will be no more gloom for those who were in distress. In the past he humbled the land of Zebulun and the land of Naphtali, but in the future he will honor Galilee of the nations, by the Way of the Sea, beyond the Jordan—

2The people walking in darkness
have seen a great light;
on those living in the land of deep darkness
a light has dawned.
3You have enlarged the nation
and increased their joy;
they rejoice before you
as people rejoice at the harvest,
as warriors rejoice
when dividing the plunder.
4For as in the day of Midian’s defeat,
you have shattered
the yoke that burdens them,
the bar across their shoulders,
the rod of their oppressor.
5Every warrior’s boot used in battle
and every garment rolled in blood
will be destined for burning,
will be fuel for the fire. 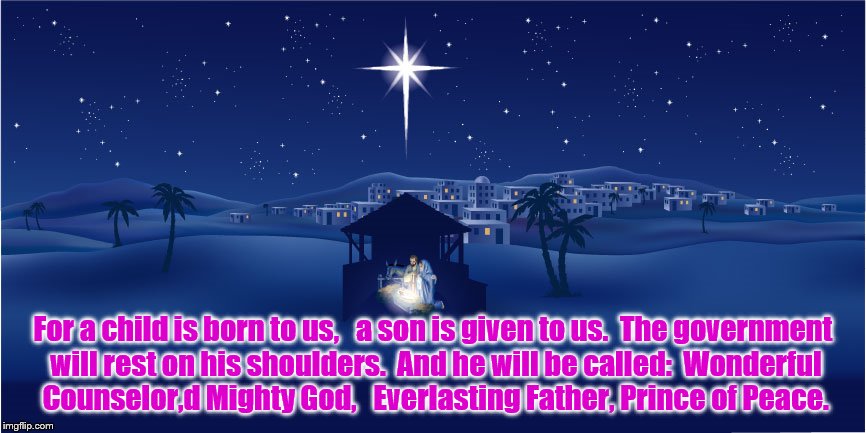 6For to us a Child Is Born,
to us a Son Is Given,
and the Government will be on HIS Shoulders.
And He Will Be Called
Wonderful Counselor, Mighty GOD,
Everlasting FATHER, PRINCE of Peace.
7Of the Greatness of HIS Government and Peace
there will be no end.
HE Will Reign on David’s Throne
and over HIS Kingdom,
Establishing and Upholding it
with justice and righteousness
from that time on and forever.
The Zeal of The LORD ALMIGHTY
Will Accomplish this.

The LORD'S Anger Against Israel

8The LORD Has Sent a message against Jacob;
it will fall on Israel.
9All the people will know it—
Ephraim and the inhabitants of Samaria—
who say with pride
and arrogance of heart,
10“The bricks have fallen down,
but we will rebuild with dressed stone;
the fig trees have been felled,
but we will replace them with cedars.”

11But The LORD Has Strengthened Rezin’s foes against them and Has Spurred their enemies on.

12Arameans from the east and Philistines from the west have devoured Israel with open mouth.
Yet for all this, HIS Anger Is Not Turned Away,
HIS Hand Is Still Upraised.
13But the people have not returned to HIM WHO Struck them,
nor have they sought The LORD ALMIGHTY
14So The LORD Will Cut Off from Israel both head and tail,
both palm branch and reed in a single day;
15the elders and dignitaries are the head,
the prophets who teach lies are the tail.
16Those who guide this people mislead them,
and those who are guided are led astray.

17Therefore The LORD Will Take no pleasure in the young men,
nor Will HE Pity the fatherless and widows,
for everyone is ungodly and wicked,
every mouth speaks folly.
Yet for all this, HIS Anger Is Not Turned Away,
HIS Hand Is Still Upraised.
18Surely wickedness burns like a fire;
it consumes briers and thorns,
it sets the forest thickets ablaze,
so that it rolls upward in a column of smoke.

19By the Wrath of The LORD ALMIGHTY
the land will be scorched
and the people will be fuel for the fire;
they will not spare one another.
20On the right they will devour,
but still be hungry;
on the left they will eat,
but not be satisfied.
Each will feed on the flesh of their own offspring a :
21Manasseh will feed on Ephraim, and Ephraim on Manasseh;
together they will turn against Judah.

Yet for all this, HIS Anger Is Not Turned Away,


HIS Hand Is Still Upraised.


1Woe to those who make unjust laws,
to those who issue oppressive decrees,
2to deprive the poor of their rights
and withhold justice from the oppressed of MY people,
making widows their prey
and robbing the fatherless. 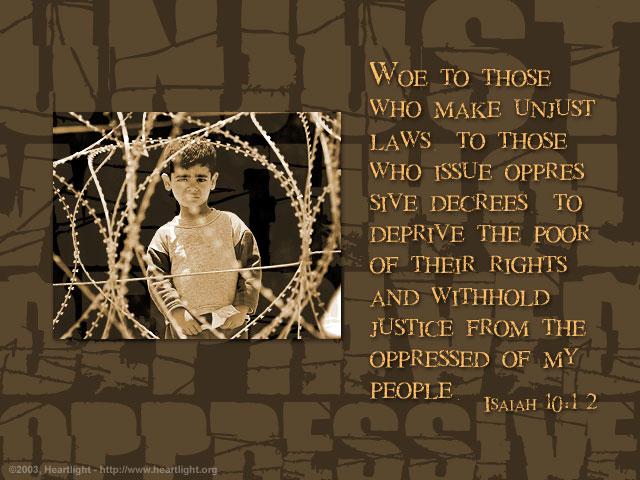 3What will you do on the day of reckoning,
when disaster comes from afar?
To whom will you run for help?
Where will you leave your riches?
4Nothing will remain but to cringe among the captives
or fall among the slain.

Yet for all this, HIS Anger Is Not Turned Away,
HIS Hand Is still Upraised.

5“Woe to the Assyrian, the rod of MY Anger,
in whose hand is the club of MY Wrath!

6I Send him against a godless nation,

I Dispatch him against a people who anger ME,

to seize loot and snatch plunder,

and to trample them down like mud in the streets.

10As my hand seized the kingdoms of the idols,
kingdoms whose images excelled those of Jerusalem and Samaria—
11Shall I not deal with Jerusalem and her images
as I dealt with Samaria and her idols?’ ”

12 When The LORD Has Finished all HIS Work against

“I Will Punish the king of Assyria for the

willful pride of his heart and the haughty

look in his eyes.

“ ‘By the strength of my hand I have done this,
and by my wisdom, because I have understanding.
I removed the boundaries of nations,
I plundered their treasures;
like a mighty one I subdueda their kings.
14As one reaches into a nest,
so my hand reached for the wealth of the nations;
as people gather abandoned eggs,
so I gathered all the countries;
not one flapped a wing,
or opened its mouth to chirp.’ ”

15Does the ax raise itself above the person who swings it,
or the saw boast against the one who uses it?
As if a rod were to wield the person who lifts it up,
or a club brandish the one who is not wood!
16Therefore, The LORD, The LORD ALMIGHTY,
Will Send a wasting disease upon his sturdy warriors;
under his pomp a fire will be kindled
like a blazing flame.

17The Light of Israel Will Become a fire,
their HOLY ONE a flame;
in a single day it will burn and consume
his thorns and his briers.
18The splendor of his forests and fertile fields
it will completely destroy,
as when a sick person wastes away.
19And the remaining trees of his forests will be so few
that a child could write them down.


20In that day the remnant of Israel,
the survivors of Jacob,
will no longer rely on him
who struck them down
but will truly rely on The LORD,
The HOLY ONE of Israel.
21A remnant will return, a remnant of Jacob
will return to The Mighty GOD. 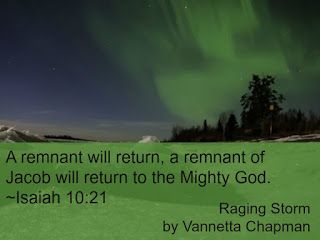 22Though your people be like the sand by the sea, Israel,
only a remnant will return. 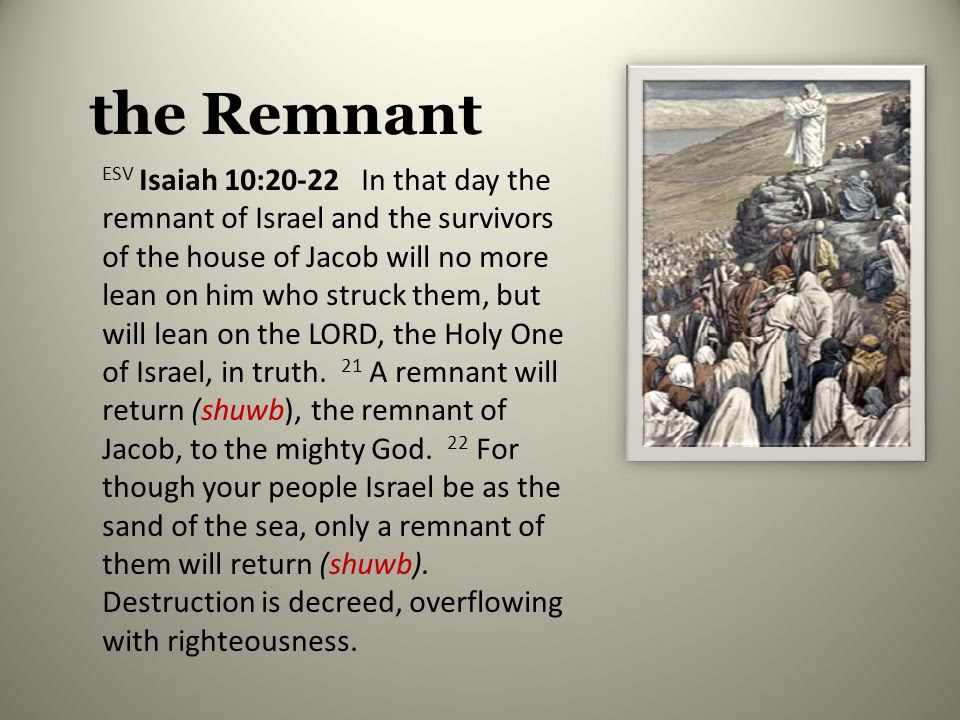 Destruction has been decreed,
overwhelming and righteous.

23The LORD, The LORD ALMIGHTY, Will Carry Out
the destruction decreed upon the whole land.

24Therefore this is what The LORD,

“MY people who live in Zion,
do not be afraid of the Assyrians,
who beat you with a rod
and lift up a club against you, as Egypt did.

25Very soon MY Anger against you Will End
and MY Wrath Will Be Directed to their destruction.”

26The LORD ALMIGHTY Will Lash them with a whip,
as When HE Struck Down Midian at the rock of Oreb;
and HE Will Raise HIS Staff over the waters,
as HE Did in Egypt.

27In that day their burden will be lifted from your shoulders,
their yoke from your neck;
the yoke will be broken
because you have grown so fat.

28They enter Aiath;
they pass through Migron;
they store supplies at Mikmash.
29They go over the pass, and say,
“We will camp overnight at Geba.”
Ramah trembles;
Gibeah of Saul flees.
30Cry out, Daughter Gallim!
Listen, Laishah!
Poor Anathoth!
31Madmenah is in flight;
the people of Gebim take cover.
32This day they will halt at Nob;
they will shake their fist
at the mount of Daughter Zion,
at the hill of Jerusalem.
33See, The LORD, The LORD ALMIGHTY,
Will Lop Off the boughs with Great Power.
The lofty trees will be felled,
the tall ones will be brought low.
34HE Will Cut Down the forest thickets with an ax;
Lebanon will fall before The MIGHTY ONE.

(Quoted from the Bible commentaries)

This chapter contains denunciations of punishment, first on the governors of the Jewish nation, and then upon the Assyrians; a woe is denounced on the makers and imposers of bad laws, whereby the poor and the needy, the widows and the fatherless, were deprived of their right, Isaiah 10:1 which woe or punishment is explained to be a desolation of their country by the Assyrians, that should come afar off, and which they could not escape; under whom they should bow and fall; and yet there should not be an end of their punishment, Isaiah 10:3 next follows a prophecy of the destruction of the Assyrians themselves, for the comfort of GOD'S people; in which is observed, that the Assyrian monarch was an instrument in The Hand of JEHOVAH To Chastise HIS people, and therefore is called the rod and staff of HIS Wrath and Indignation, Isaiah 10:5

The people are described against whom he was sent, and the end for which is mentioned, Isaiah 10:6 though this was not his intention, nor did he design to stop here, but to destroy and cut off many other nations, Isaiah 10:7 which he hoped to do from the magnificence of his princes, who were as kings, and from the conquests he had made of kingdoms, and their chief cities, Isaiah 10:8 wherefore, when The LORD Had Done what HE Designed To Do by him among is people the Jews.

HE Was Determined To Punish him, because of the pride of his heart, and the haughtiness of his looks, and his boasting of his strength and wisdom, and of his robberies and plunders, without opposition; which boasting was as foolish as if an axe, a saw, a rod, and a staff, should boast, magnify, move, and lift up themselves against the person that made use of them, Isaiah 10:12 which punishment is said to come from The LORD, and is expressed by a consuming and devouring fire; for which reason his army is compared to thorns and briers, to a forest, and a fruitful field, which should be destroyed at once; so that what of the trees remained should be so few as to be numbered by a child, Isaiah 10:16

And, for the further consolation of the people of GOD, it is observed, that in the times following the destruction of the Assyrian monarchy, a remnant of the people of Israel should be converted, and no more lean upon an arm of flesh, but upon The LORD CHRIST, The HOLY ONE of Israel; even a remnant only; for though that people were very numerous, yet a remnant, according to the election of grace, should be saved, when it was the determinate Counsel of GOD, and according to HIS Righteous Judgment, to Destroy the far greater part of them, for their perverseness and obstinacy, Isaiah 10:20 wherefore the people of GOD are exhorted not to be afraid of the Assyrian, though chastised by HIM; since in a little time the Anger of The LORD Would Cease in his destruction, which should be after the manner of the Egyptians at the Red sea, and as the slaughter of Midian at the rock of Oreb;

They would be free from his burden and yoke, because of The Anointed King that Should Reign, or The King MESSIAH, Isaiah 10:24 and then follows a description of the expedition of the king of Assyria into Judea, by making mention of the several places through which he should pass with terror to the inhabitants, until he should come to Jerusalem, against which he should shake his hand, Isaiah 10:28 and then, under the similes of lopping a bough, and cutting down the thickets of a forest, and the trees of Lebanon, is predicted the destruction of his army and its generals by an angel, Isaiah 10:33.