The Salvation In CHRIST JESUS Will Last Forever

2look to Abraham, your father,
and to Sarah, who gave you birth.
When I Called him he was only one man,
and I Blessed him and Made him many.

3The LORD Will Surely Comfort Zion
and Will Look With Compassion on all her ruins;
HE Will Make her deserts like Eden,
her wastelands like The Garden of The LORD.
Joy and gladness will be found in her,
thanksgiving and the sound of singing.

4“Listen to ME, MY people;
Hear ME, MY nation:
Instruction will go out from ME;
MY Justice Will Become a light to the nations.

5MY Righteousness Draws near speedily,
MY Salvation Is on the way,
and MY Arm Will Bring Justice to the nations.
The islands will look to ME
and wait in hope for MY Arm. 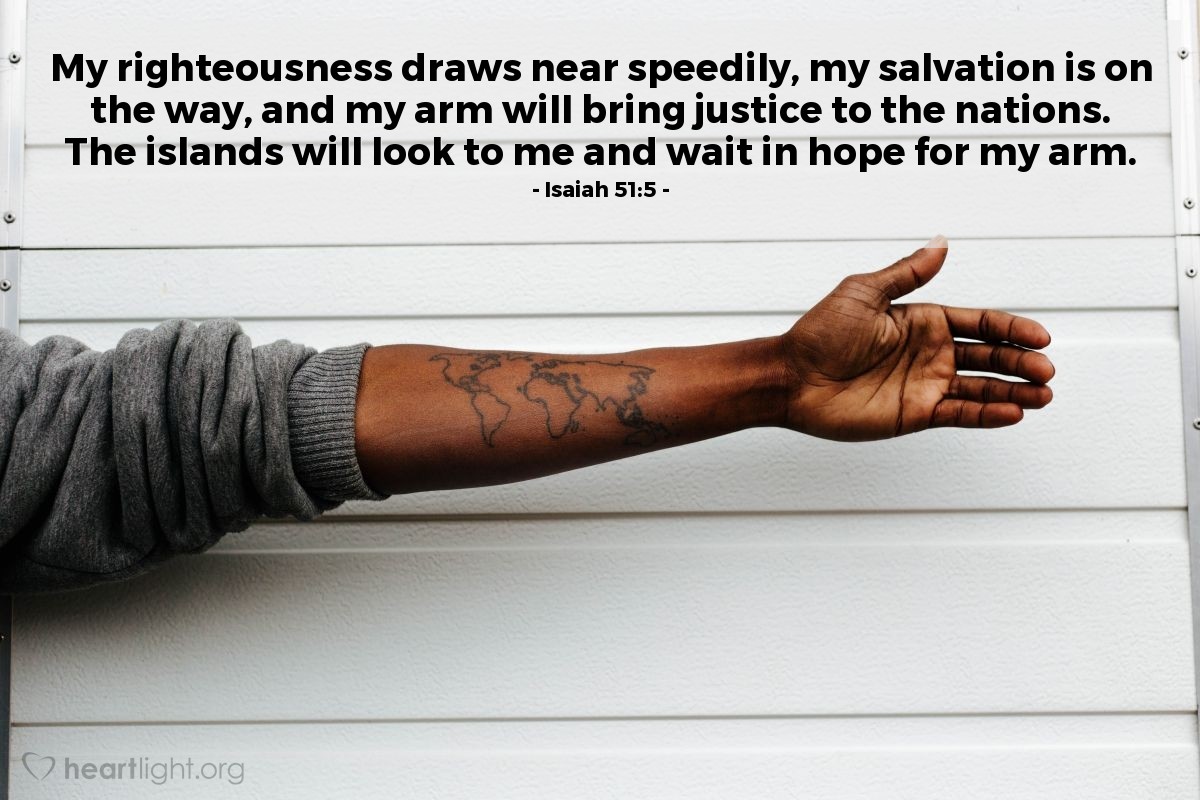 6Lift up your eyes to the heavens,
look at the earth beneath;
the heavens will vanish like smoke,
the earth will wear out like a garment
and its inhabitants die like flies.

But MY Salvation Will Last forever,

MY Righteousness Will Never Fail. 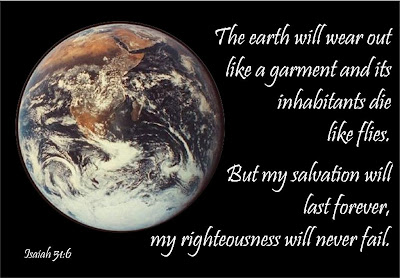 7“Hear ME, you who know what is right,
you people who have taken MY Instruction to heart:
Do not fear the reproach of mere mortals
or be terrified by their insults.

8For the moth will eat them up like a garment;
the worm will devour them like wool.
But MY Righteousness Will Last forever,
My Salvation through all generations.”

9Awake, Awake, Arm of The LORD,
Clothe YOURSELF with Strength!
Awake, as in days gone by,
as in generations of old.
Was It Not YOU WHO Cut Rahab to pieces,
Who Pierced that monster through?

10Was It Not YOU WHO Dried Up the sea,
the waters of the great deep,
Who Made a road in the depths of the sea
so that the redeemed might cross over?

11Those The LORD Has Rescued will return.
They will enter Zion with singing;
everlasting joy will crown their heads.
Gladness and joy will overtake them,
and sorrow and sighing will flee away.

12“I, even I, AM HE WHO Comforts you.
Who are you that you fear mere mortals,
human beings who are but grass, 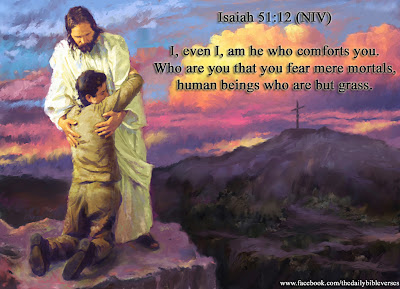 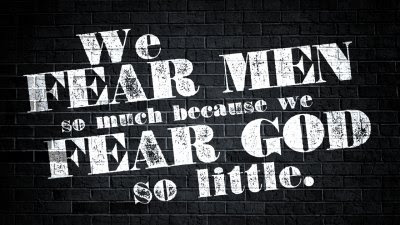 13that you forget The LORD your Maker,
WHO Stretches Out the heavens
and WHO Lays the foundations of the earth, 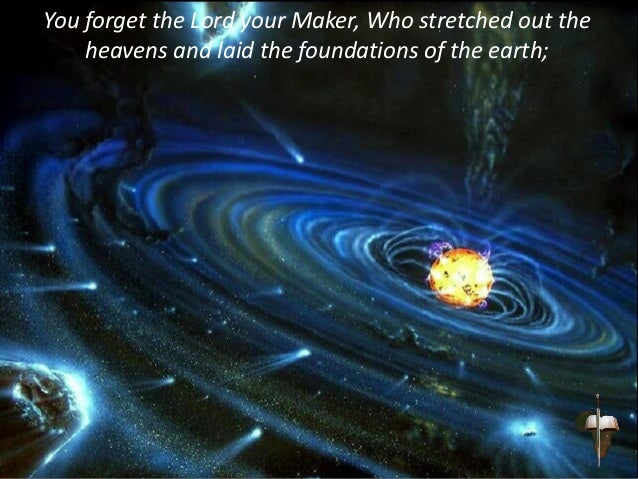 14The cowering prisoners will soon be set free;
they will not die in their dungeon,
nor will they lack bread.

15For I AM The LORD your GOD,
WHO Stirs Up the sea so that its waves roar—
The LORD ALMIGHTY Is HIS Name.

16I Have Put MY WORDS in your mouth
and covered you with the Shadow of MY Hand—
I WHO Set the heavens in place,
WHO Laid the foundations of the earth,
and WHO Says to Zion, 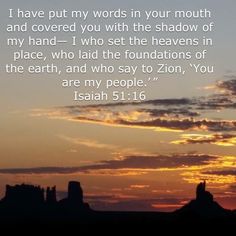 The Cup of the LORD'S Wrath

17Awake, awake!
Rise up, Jerusalem,
you who have drunk from The Hand of The LORD
the Cup of HIS Wrath,
you who have drained to its dregs
the goblet that makes people stagger.
18Among all the children she bore
there was none to guide her;
among all the children she reared
there was none to take her by the hand.
19These double calamities have come upon you—
who can comfort you?—
ruin and destruction, famine and sword—
who cana console you?
20Your children have fainted;
they lie at every street corner,
like antelope caught in a net.
They are filled with The Wrath of The LORD,
with the rebuke of your GOD.
21Therefore hear this, you afflicted one,
made drunk, but not with wine.

22This Is What your SOVEREIGN LORD Says,

your GOD, WHO Defends HIS people:

“See, I Have Taken out of your hand
the cup that made you stagger;
from that cup, the goblet of MY Wrath,
you will never drink again. 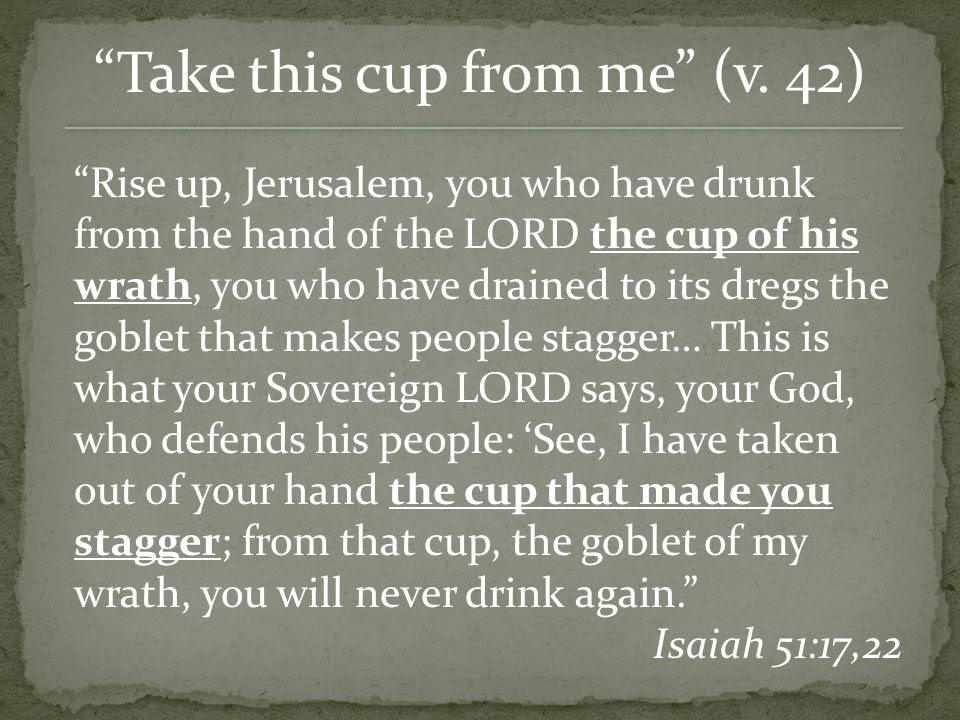 23I Will Put it Into the hands of your tormentors,
who said to you,
‘Fall prostrate that we may walk on you.’
And you made your back like the ground,
like a street to be walked on.”

The prophet exhorts the children of Abraham to trust in The LORD; and briefly, but beautifully, describes the great blessedness which should be the consequence, Isaiah 51:1-3. Then, turning to the Gentiles, encourages them to look for a portion in the same salvation, Isaiah 51:4, Isaiah 51:5; the everlasting duration of which is majestically described, Isaiah 51:6. And as it is everlasting, so is it sure to the righteous, notwithstanding all the machinations of their enemies, Isaiah 51:7, Isaiah 51:8.

The faithful, then, with exultation and joy, lift their voices, reminding GOD of HIS Wondrous Works of old, which encourage them to look now for the like glorious accomplishment of these promises, Isaiah 51:9-11. In answer to this the Divinity is introduced comforting them under their trials, and telling them that the deliverer was already on his way to save and to establish them, Isaiah 51:12-16.

On this the prophet turns to Jerusalem to comfort and congratulate her on so joyful a prospect. She is represented, by a bold image, as a person lying in the streets, under the intoxicating effects of the cup of the Divine Wrath, without a single person from among her own people appointed to give her consolation, and trodden under the feet of her enemies; but, in the time allotted by the Divine Providence, the cup of trembling shall be taken out of her hand, and put into that of her oppressors; and she shall drink it no more again forever, Isaiah 51:17-22.