FATHER JEHOVAH Says To HIS SON JESUS, "Sit At MY Right Hand"

1JESUS Entered Jericho and Was Passing through. 2A man was there by the name of Zacchaeus; he was a chief tax collector and was wealthy. 3He wanted to see WHO JESUS Was, but because he was short he could not see over the crowd. 4So he ran ahead and climbed a sycamore-fig tree to see HIM, since JESUS Was Coming that way.

5When JESUS Reached the spot, HE Looked Up and Said to him,

“Zacchaeus, Come Down Immediately. I Must Stay at 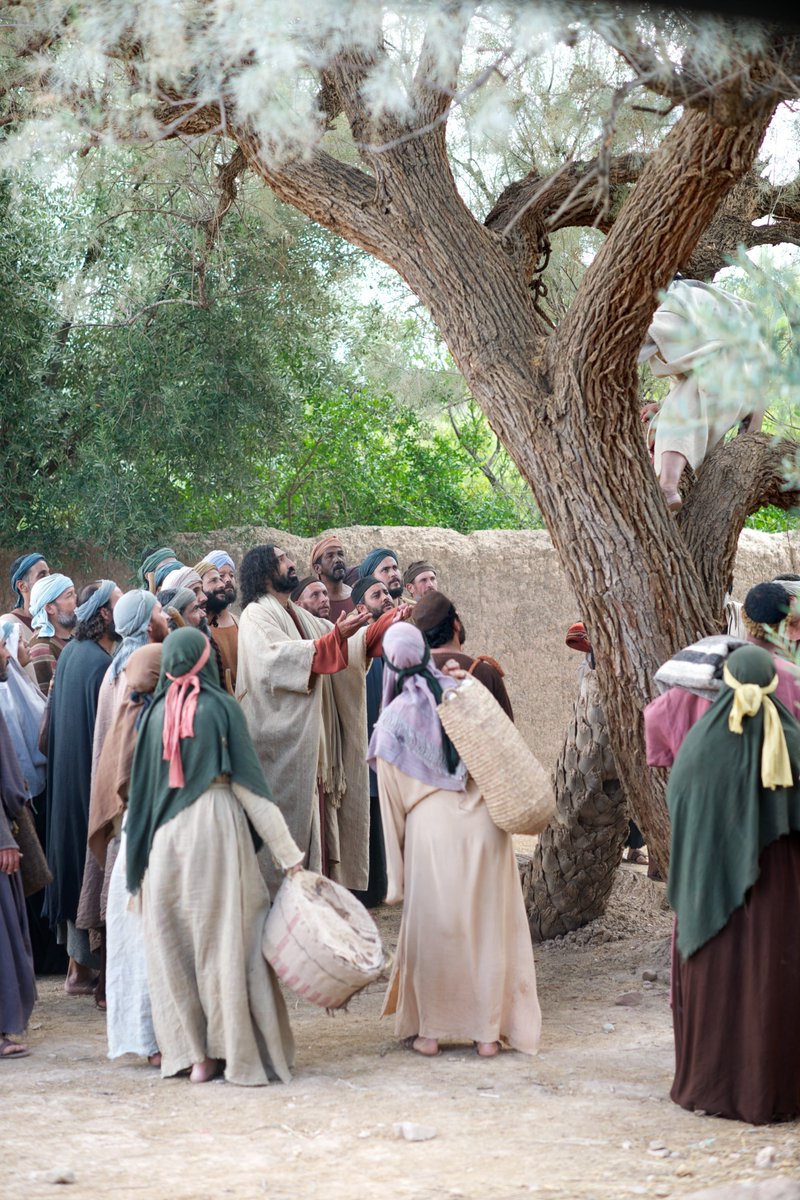 6So he came down at once and welcomed HIM gladly.

7All the people saw this and began to mutter, “HE Has Gone To Be the guest of a sinner.”

8But Zacchaeus stood up and said to The LORD, “Look, LORD! Here and now I give half of my possessions to the poor, and if I have cheated anybody out of anything, I will pay back four times the amount.”

9JESUS Said to him,

“Today salvation has come to this house, because

this man, too, is a son of Abraham.

10For The SON of Man Came To Seek and To Save the lost.”

The Parable of the Ten Minas

11While they were listening to this, HE Went On To Tell them a parable, because HE Was near Jerusalem and the people thought that The Kingdom of GOD Was Going To Appear at once.

“A man of noble birth went to a distant country to have himself appointed king and then to return. 13So he called ten of his servants and gave them ten minas. a ‘Put this money to work,’ he said, ‘until I come back.’

14“But his subjects hated him and sent a delegation after him to say, ‘We don’t want this man to be our king.’

15“He was made king, however, and returned home. Then he sent for the servants to whom he had given the money, in order to find out what they had gained with it.

16“The first one came and said, ‘Sir, your mina has earned ten more.’

17“ ‘Well done, my good servant!’ his master replied. ‘Because you have been trustworthy in a very small matter, take charge of ten cities.’

18“The second came and said, ‘Sir, your mina has earned five more.’

19“His master answered, ‘You take charge of five cities.’

20“Then another servant came and said, ‘Sir, here is your mina; I have kept it laid away in a piece of cloth. 21I was afraid of you, because you are a hard man. You take out what you did not put in and reap what you did not sow.’

22“His master replied, ‘I will judge you by your own words, you wicked servant! You knew, did you, that I am a hard man, taking out what I did not put in, and reaping what I did not sow?

23Why then didn’t you put my money on deposit, so that when I came back, I could have collected it with interest?’

24“Then he said to those standing by, ‘Take his mina away from him and give it to the one who has ten minas.’

26“He replied, ‘I tell you that to everyone who has, more will be given, but as for the one who has nothing, even what they have will be taken away.

27But those enemies of MINE who did not want ME To

Be King Over them—Bring them here and Kill them in 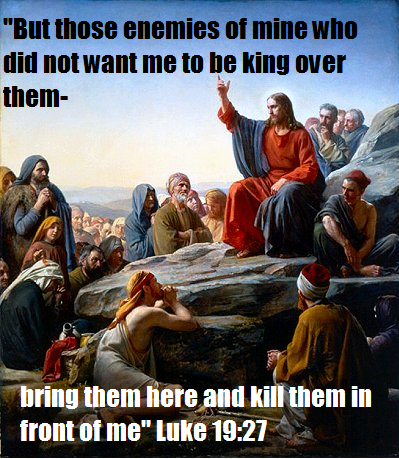 28After JESUS Had Said this, HE Went On Ahead, Going Up To Jerusalem.

29As HE Approached Bethphage and Bethany at the hill called the Mount of Olives, HE Sent two of HIS disciples, Saying To them,

30“Go to the village ahead of you, and as you enter it, you will find a colt tied there, which no one has ever ridden. Untie it and bring it here. 31If anyone asks you, ‘Why are you untying it?’ say, ‘The LORD Needs it.’ ”

35They brought it to JSUS, threw their cloaks on the colt and put JESUS on it.

36As HE Went Along, people spread their cloaks on the road.

37When HE Came near the place where the road goes down the Mount of Olives, the whole crowd of disciples began joyfully to Praise GOD in loud voices for all the miracles they had seen:

38“Blessed is The KING WHO Comes In The NAME

“Peace in Heaven and Glory in The Highest!” 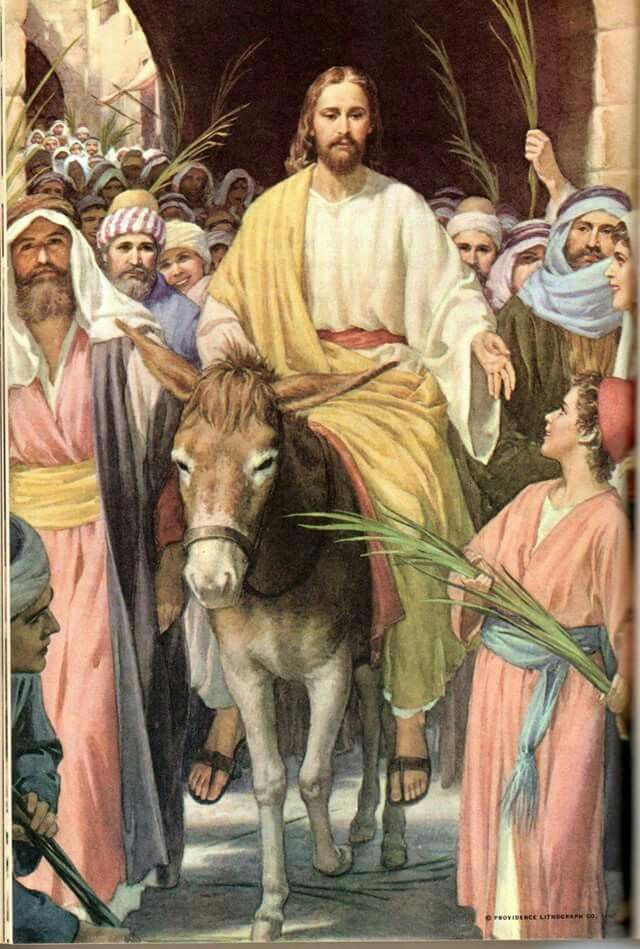 39Some of the Pharisees in the crowd said to JESUS, “Teacher, Rebuke YOUR disciples!”

41As HE Approached Jerusalem and Saw the city, HE Wept Over it 42and Said,

“If you, even you, had only known on this day what would bring you peace—but now it is hidden from your eyes. 43The days will come upon you when your enemies will build an embankment against you and encircle you and hem you in on every side. 44They will dash you to the ground, you and the children within your walls. They will not leave one stone on another, because you did not recognize the Time of GOD'S Coming To you.”

Jesus at the Temple

45When JESUS Entered the Temple Courts, HE Began To Drive Out those who were selling.

47Every day HE Was Teaching at the Temple. But the chief priests, the teachers of the law and the leaders among the people were trying to kill HIM.

48Yet they could not find any way to do it, because all the people hung on HIS Words.


The Authority of JESUS Questioned


1One day As JESUS Was Teaching the people in the Temple courts and Proclaiming the Good News, the chief priests and the teachers of the Law, together with the elders, came up to HIM. 2“Tell us by what Authority YOU Are Doing these things,” they said. “WHO Gave YOU this Authority?”


“I Will also Ask you a question. Tell ME:

4John’s baptism—was it from Heaven, or of human

5They discussed it among themselves and said, “If we say, ‘From Heaven,’ HE Will Ask, ‘Why didn’t you believe him?’ 6But if we say, ‘Of human origin,’ all the people will stone us, because they are persuaded that John was a prophet.”

7So they answered, “We don’t know where it was from.”


“Neither Will I Tell you by what Authority I AM Doing


9HE Went On To Tell the people this parable:


“A Man Planted a vineyard, Rented it to some farmers and Went Away for a long time. 10At harvest time HE Sent a servant to the tenants so they would give him some of the fruit of the vineyard. But the tenants beat him and sent him away empty-handed. 11HE Sent another servant, but that one also they beat and treated shamefully and sent away empty-handed. 12HE Sent still a third, and they wounded him and threw him out.

13“Then The Owner of the vineyard Said,

‘What Shall I Do? I Will Send MY SON, WHOM I Love; perhaps they will respect HIM.’

14“But when the tenants saw HIM, they talked the matter over. ‘This is The Heir,’ they said. ‘Let’s kill HIM, and the inheritance will be ours.’ 15So they threw HIM out of the vineyard and killed HIM.

“What then Will The Owner of the vineyard Do to them? 16HE Will Come and Kill those tenants and Give the vineyard to others.”

When the people heard this, they said,

17JESUS Looked directly At them and Asked,


“Then what is the meaning of that which is written:

“ ‘The Stone the builders rejected

Has Become The Cornerstone’ ?

18Everyone who falls on that Stone will be broken to

pieces; anyone on whom It falls will be crushed.”

19The teachers of the Law and the chief priests looked for a way to arrest HIM immediately, because they knew HE Had Spoken this parable against them. But they were afraid of the people.


20Keeping a close watch on HIM, they sent spies, who pretended to be sincere. They hoped to catch JESUS in something HE Said, so that they might hand HIM over to the power and authority of the governor. 21So the spies questioned HIM: “Teacher, we know that YOU Speak and Teach what is right, and that YOU Do Not Show partiality but Teach The Way of GOD in accordance with The Truth.

23HE Saw through their duplicity and Said to them,


24“Show ME a denarius. Whose image and inscription 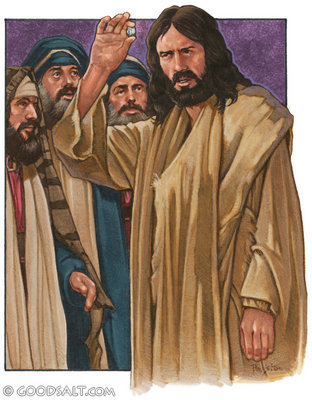 “Then give back to Caesar what is

26They were unable to trap HIM in what HE Had Said there in public. And astonished by HIS Answer, they became silent.

The Resurrection and Marriage

27Some of the Sadducees, who say there is no resurrection, came to JESUS with a question.28“Teacher,” they said, “Moses wrote for us that if a man’s brother dies and leaves a wife but no children, the man must marry the widow and raise up offspring for his brother. 29Now there were seven brothers. The first one married a woman and died childless. 30The second 31and then the third married her, and in the same way the seven died, leaving no children. 32Finally, the woman died too. 33Now then, at the resurrection whose wife will she be, since the seven were married to her?”

“The people of this age marry and are given in

35But those who are considered worthy of taking part in the age to come and in the resurrection from the dead will neither marry nor be given in marriage,

36and they can no longer die; for they are like the angels. They are GOD’S children, since they are children of the resurrection.

37But in the account of the burning bush, even Moses

showed that the dead rise, for he calls The LORD ‘The

GOD of Abraham, and The GOD of Isaac, and The

39Some of the teachers of the Law responded, “Well said, teacher!” 40And no one dared to ask HIM any more questions.

Whose SON Is The MESSIAH?

41Then JESUS Said to them,


“Why is it said that The MESSIAH Is the son of David?

42David himself declares in the Book of Psalms:

“ ‘The LORD said to my LORD:
“Sit At MY Right Hand
43Until I Make YOUR enemies
a Footstool for YOUR Feet.” ’ Warning Against the Teachers of the Law

45While all the people were listening, JESUS Said To HIS disciples,


46“Beware of the teachers of the Law. They like to walk around in flowing robes and love to be greeted with respect in the marketplaces and have the most important seats in the synagogues and the places of honor at banquets. 47They devour widows’ houses and for a show make lengthy prayers. These men will be punished most severely.”