JEHOVAH Has Forsaken JESUS To Forgive Us Our Sins


1Early in the morning, all the chief priests and the elders of the people made their plans how to have JESUS executed. 2So they bound HIM, led HIM away and handed HIM over to Pilate the governor.

3When Judas, who had betrayed HIM, saw that JESUS Was Condemned, He was seized with remorse and returned the thirty pieces of silver to the chief priests and the elders.


4“I have sinned,” he said, “for I have betrayed innocent blood.”

“What is that to us?” they replied. “That’s your responsibility.”

5So Judas threw the money into The Temple and left. Then he went away and hanged himself. 6The chief priests picked up the coins and said, “It is against the Law to put this into the treasury, since it is blood money.” 7So they decided to use the money to buy the potter’s field as a burial place for foreigners.8That is why it has been called the Field of Blood to this day.

9Then what was spoken by Jeremiah the prophet was

“They took the thirty pieces of silver, the price set on HIM by the people of Israel, 10and they used them to buy the potter’s field, As The LORD Commanded ME.”a

“Are YOU The KING of the Jews?”

12When HE Was Accused by the chief priests and the elders, HE Gave No Answer. 13Then Pilate asked HIM, “Don’t YOU hear the testimony they are bringing against YOU?” 14But JESUS Made No Reply, not even to a single charge—to the great amazement of the governor.

15Now it was the governor’s custom at the festival to release a prisoner chosen by the crowd. 16At that time they had a well-known prisoner whose name was Jesus Barabbas. 17So when the crowd had gathered, Pilate asked them,

“Which one do you want me to release to you:


Jesus Barabbas, or JESUS WHO Is Called


18For he knew it was out of self-interest that they had handed JESUS over to him.

19While Pilate was sitting on the judge’s seat, his wife sent him this message:

“Don’t have anything to do with That Innocent Man,  for I have suffered a great deal today in a dream because of HIM.”

20But the chief priests and the elders persuaded the crowd to ask for Barabbas and to have JESUS executed.

21“Which of the two do you want me to release to you?” asked the governor.

22 “What shall I do, then, with JESUS WHO Is Called

They all answered, “Crucify HIM!”

23“Why? What crime Has HE Committed?” asked Pilate.

But they shouted all the louder, “Crucify HIM!”

24When Pilate saw that he was getting nowhere, but that instead an uproar was starting, he took water and washed his hands in front of the crowd. “I am innocent of This Man’s Blood,” he said. “It is your responsibility!”

25All the people answered,

“HIS Blood Is on us and on our children!”

26Then he released Barabbas to them. But he had JESUS flogged, and handed HIM over to be crucified.


27Then the governor’s soldiers took JESUS into the Praetorium and gathered the whole company of soldiers around HIM. 28They stripped HIM and put a scarlet robe on HIM, 29and then twisted together a crown of thorns and set it on HIS Head. They put a staff in HIS Right Hand. Then they knelt in front of HIM and mocked HIM.

30 They spit on HIM, and took the staff and struck HIM on the Head again and again. 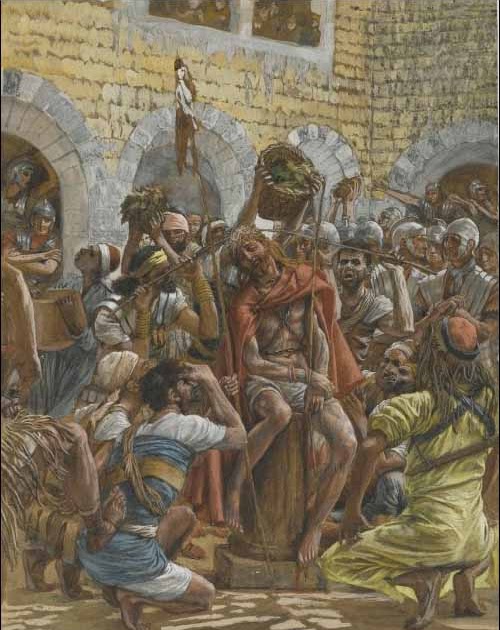 31After they had mocked HIM, they took off the robe and put HIS OWN clothes on HIM. Then they led HIM away to crucify HIM.


The Crucifixion of JESUS


32As they were going out, they met a man from Cyrene, named Simon, and they forced him to carry the cross. 33They came to a place called Golgotha (which means “the place of the skull”). 34There they offered JESUS wine to drink, mixed with gall; but after tasting it, HE Refused to drink it. 35When they had crucified HIM, they divided up HIS Clothes by casting lots. 36And sitting down, they kept watch over HIM there.


37Above HIS Head they placed the written charge against HIM:

THIS IS JESUS, THE KING OF THE JEWS.

38Two rebels were crucified with HIM, one on HIS Right and one on HIS Left. 39Those who passed by hurled insults at HIM, shaking their heads 40and saying,


“YOU Who Are Going To Destroy The Temple and Build It in three days, Save YOURSELF! Come down from the cross, If YOU Are The SON of GOD!”

41In the same way the chief priests, the teachers of the Law and the elders mocked HIM.

“But HE Can’t Save HIMSELF!

HE’S The KING of Israel!

Let HIM Come Down Now from the cross, and we will believe in HIM. 43HE Trusts In GOD. Let GOD Rescue HIM Now If HE Wants HIM, For HE said, ‘I AM The SON of GOD.’ ”

44In the same way the rebels who were crucified with HIM also heaped insults on HIM.


The Death of JESUS 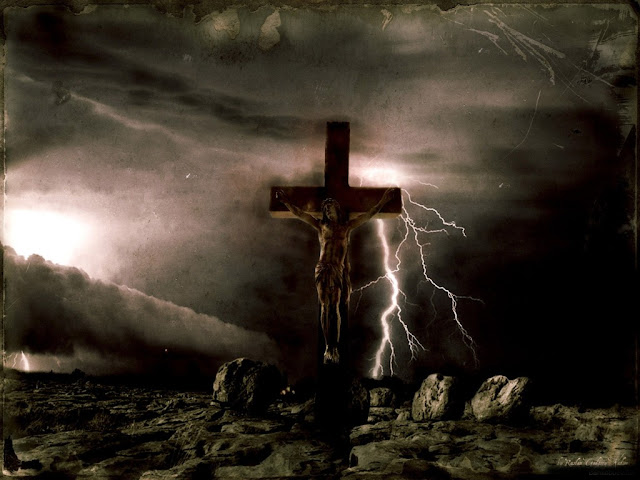 47When some of those standing there heard this, they said,

48Immediately one of them ran and got a sponge. He filled it with wine vinegar, put it on a staff, and offered it to JESUS to drink. 49The rest said, “Now leave HIM Alone. Let’s see if Elijah comes to save HIM.”

50 And When JESUS Had Cried Out Again in a loud

Voice, HE Gave Up HIS SPIRIT. 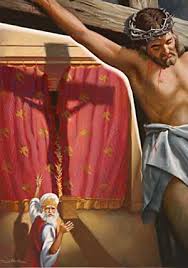 51At that moment the Curtain of The Temple was torn in two from top to bottom.

The earth shook, the rocks split 52and the tombs broke open. The bodies of many holy people who had died were raised to life. 53They came out of the tombs after JESUS’ Resurrection ande went into the holy city and appeared to many people.

54When the centurion and those with him who were guarding JESUS saw the earthquake and all that had happened, they were terrified, and exclaimed,

“Surely HE Was The SON of GOD!” 55Many women were there, watching from a distance. They had followed JESUS from Galilee to care for HIS Needs. 56Among them were Mary Magdalene, Mary the mother of James and Joseph,f and the mother of Zebedee’s sons.

The Burial of JESUS

57As evening approached, there came a rich man from Arimathea, named Joseph, who had himself become a disciple of JESUS. 58Going to Pilate, he asked for JESUS’ Body, and Pilate ordered that It Be Given to him. 59Joseph took The Body, wrapped it in a clean linen cloth,

60and placed it in his own new tomb that he had cut out of the rock. He rolled a big stone in front of the entrance to the tomb and went away.

61Mary Magdalene and the other Mary were sitting there opposite the tomb.

The Guard at the Tomb

62The next day, the one after Preparation Day, the chief priests and the Pharisees went to Pilate. 63“Sir,” they said, “we remember that while HE Was Still Alive That Deceiver Said, ‘After Three Days I Will Rise Again.’64So give the order for the tomb to be made secure until the third day. Otherwise, HIS disciples may come and steal the body and tell the people that HE Has Been Raised From the dead. This last deception will be worse than the first.”

65“Take a guard,” Pilate answered. “Go, make the tomb as secure as you know how.” 66So they went and made the tomb secure by putting a seal on the stone and posting the guard. 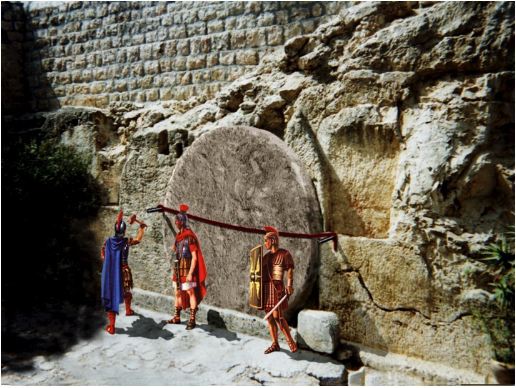