How Can A Loving GOD Send Anyone To Hell - Part 2


Most contemporary theologians would say about hell like this:
"Hell is not about fire and brimstone; it is about our freedom to say no to GOD, our freedom to reject love and choose loneliness. If you believe in freedom, you have to believe in hell.
When we close our hearts and tell the world to go to hell, we are in fact choosing hell for ourselves. Hell is the absence of love, companionship, communion.
We are not sent there; we choose it.
GOD Did Not Create hell; we did."

It's not so true because the Bible Says in Matthew 25:41,
"Then HE Will Say to those on HIS left,
'Depart from ME, you who are cursed, into the eternal fire prepared for the devil and his angels.'" 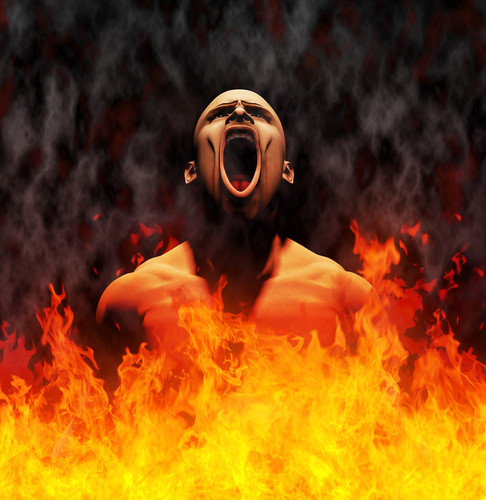 How Can A Loving GOD Send Anyone To Hell? - Part 2

One of the things that’s striking about the Gospel accounts of JESUS' Life and Words is that HE Didn’t Shrink from Talking about hell (people often think that GOD'S Judgement and Anger were more Old Testament kind of themes). In fact, JESUS Mentions hell more than anyone else in the whole Bible.As Abi said, hell isn’t an easy thing to hear about or think about. But of course that doesn’t mean it’s not true. If JESUS Is WHO HE Says HE Is—GOD on earth—then it’s well worth listening to what HE Says lies beyond our deaths.

What Did JESUS Say about hell?
It’s a real place:

This might sound obvious. But JESUS Talks of someone who “died and was buried [and was] in hell” (Luke chapter 16 verse 23). Hell is not just feeling sad or depressed (like when people say: “I’m going through hell”). And it’s not the worst this world can throw at us (“Hell on earth”). It is a real existence in a real place beyond physical death.It’s awful:

JESUS Spoke of people in hell being “in torment” (Luke 16:23). This side of death, GOD Kindly Gives gifts (life, friendship, love, hope, possessions and so on) to all kinds of people, whether they thank HIM for them or whether they just enjoy them while ignoring HIM (Acts 14:17).But the other side of death, we either live with GOD, enjoying HIM and HIS gifts: or we live without HIM, and without HIM gifts: what the Bible Calls “hell”. It’s hard to imagine existence without anything good at all. No joy or peace or love or security, and no prospect of ever having them.It’s final:

JESUS Said: “a great chasm has been fixed [between heaven and hell], so that those who want to … cross over cannot” (Luke 16:26). There are no second chances, no get-out clauses.It’s eternal:

JESUS Often Pictured hell as a fire, which, HE Said, “never goes out” (Mark 9:43). Strange though it may seem, we’re all created to live eternally: the question is where we’ll be forever.Crucially, it’s fair:

Hell is a place without GOD'S Loving Rule, which is precisely what people who go there have rejected. As Abi said, because none of us are perfect, none of us deserve to live in GOD'S Perfect world, because “nothing impure will ever enter it” (Revelation 21:27). GOD Is a Loving, Perfectly Just GOD, and so HE Judges wrongdoing: mine, yours, everyone’s. Just as it’s fair that a lawbreaker in this country faces punishment, so it’s fair that we who live in GOD'S World and Break HIS Rules face HIS punishment.In some ways, since no one is perfect, the real question isn’t: “Why does anyone go to hell?” but: “Why does anyone go to heaven?”If life were “fair”, we would all go to hell and no one would get to live in heaven, in GOD'S Perfect Kingdom beyond JESUS' Return. But the amazing news, as Abi said, is that GOD Has Done something to Make it possible for imperfect people like us to live in HIS Perfect Kingdom beyond death.And HE Did it through JESUS, HIS SON. JESUS Will Return to this world to Judge and Punish; but first, HE Came to this world to Serve and to Save. HE Said about HIMSELF:

“GOD So Loved the world that HE Sent HIS ONE and ONLY SON, that whoever believes in HIM shall not perish [ie: go to hell] but have eternal life [in GOD'S Kingdom]” (John 3:16).
JESUS Made it possible for people to have life with GOD instead of the hell we deserve by taking the punishment of separation from HIS FATHER GOD'S Love and all good things. That’s what HE Did on the Cross, where HE Cried Out:

Let GOD'S Word Be The Truth of All!!