1Saul was thirtya years old when he became king, and he reigned over Israel forty-b two years.

5The Philistines assembled to fight Israel, with three thousandc chariots, six thousand charioteers, and soldiers as numerous as the sand on the seashore. They went up and camped at Mikmash, east of Beth Aven. 6When the Israelites saw that their situation was critical and that their army was hard pressed, they hid in caves and thickets, among the rocks, and in pits and cisterns. 7Some Hebrews even crossed the Jordan to the land of Gad and Gilead.

Saul remained at Gilgal, and all the troops with him were quaking with fear. 8He waited seven days, the time set by Samuel; but Samuel did not come to Gilgal, and Saul’s men began to scatter. 9So he said, “Bring me the burnt offering and the fellowship offerings.” And Saul offered up the burnt offering. 10Just as he finished making the offering, Samuel arrived, and Saul went out to greet him.

11“What have you done?” asked Samuel

Saul replied, “When I saw that the men were scattering, and that you did not come at the set time, and that the Philistines were assembling at Mikmash, 12I thought, ‘Now the Philistines will come down against me at Gilgal, and I have not sought The LORD'S  Favor.’ So I felt compelled to offer the burnt offering.” 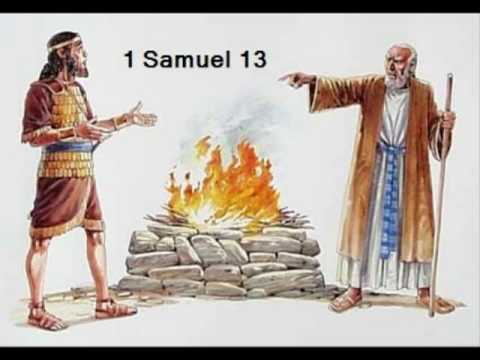 13“You have done a foolish thing,” Samuel said. “You have not kept the Command The LORD your GOD Gave you; if you had, HE Would Have Established your kingdom over Israel for all time. 14But now your kingdom will not endure; The LORD Has Sought Out a man after HIS OWN Heart and Appointed him ruler of HIS people, because you have not kept The LORD'S Command.”

15Then Samuel left Gilgal and went up to Gibeah in Benjamin, and Saul counted the men who were with him. They numbered about six hundred.

16Saul and his son Jonathan and the men with them were staying in Gibeahe in Benjamin, while the Philistines camped at Mikmash. 17Raiding parties went out from the Philistine camp in three detachments. One turned toward Ophrah in the vicinity of Shual, 18another toward Beth Horon, and the third toward the borderland overlooking the Valley of Zeboyim facing the wilderness.

19Not a blacksmith could be found in the whole land of Israel, because the Philistines had said, “Otherwise the Hebrews will make swords or spears!” 20So all Israel went down to the Philistines to have their plow points, mattocks, axes and sicklesf sharpened. 21The price was two-thirds of a shekelg for sharpening plow points and mattocks, and a third of a shekelh for sharpening forks and axes and for repointing goads.

22So on the day of the battle not a soldier with Saul and Jonathan had a sword or spear in his hand; only Saul and his son Jonathan had them.


23Now a detachment of Philistines had gone out to the pass at Mikmash.