2 Samuel 11 - But The Thing David Had Done Displeased JEHOVAH

1In the spring, at the time when kings go off to war, David sent Joab out with the king’s men and the whole Israelite army. They destroyed the Ammonites and besieged Rabbah. But David remained in Jerusalem.

2 One evening David got up from his bed and walked around on the roof of the palace. From the roof he saw a woman bathing. The woman was very beautiful,

3and David sent someone to find out about her.

The man said, “She is Bathsheba, the daughter of Eliam and the wife of Uriah the Hittite.”

4Then David sent messengers to get her. She came to him, and he slept with her. (Now she was purifying herself from her monthly uncleanness.) 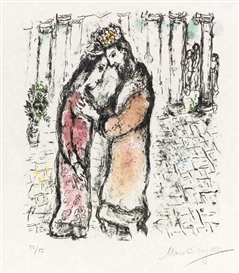 Then she went back home. 5The woman conceived and sent word to David,

6So David sent this word to Joab: “Send me Uriah the Hittite.” And Joab sent him to David. 7When Uriah came to him, David asked him how Joab was, how the soldiers were and how the war was going. 8Then David said to Uriah, “Go down to your house and wash your feet.” So Uriah left the palace, and a gift from the king was sent after him. 9But Uriah slept at the entrance to the palace with all his master’s servants and did not go down to his house.

10David was told, “Uriah did not go home.” So he asked Uriah, “Haven’t you just come from a military campaign? Why didn’t you go home?”


“The Ark and Israel and Judah are staying in tents, and my commander Joab and my lord’s men are camped in the open country. How could I go to my house to eat and drink and make love to my wife? As surely as you live, I will not do such a thing!”

12Then David said to him, “Stay here one more day, and tomorrow I will send you back.” So Uriah remained in Jerusalem that day and the next. 13At David’s invitation, he ate and drank with him, and David made him drunk. But in the evening Uriah went out to sleep on his mat among his master’s servants; he did not go home.

14In the morning David wrote a letter to Joab and sent it with Uriah. 15In it he wrote,

“Put Uriah out in front where the fighting is fiercest. Then withdraw from him so he will be struck down and die.” 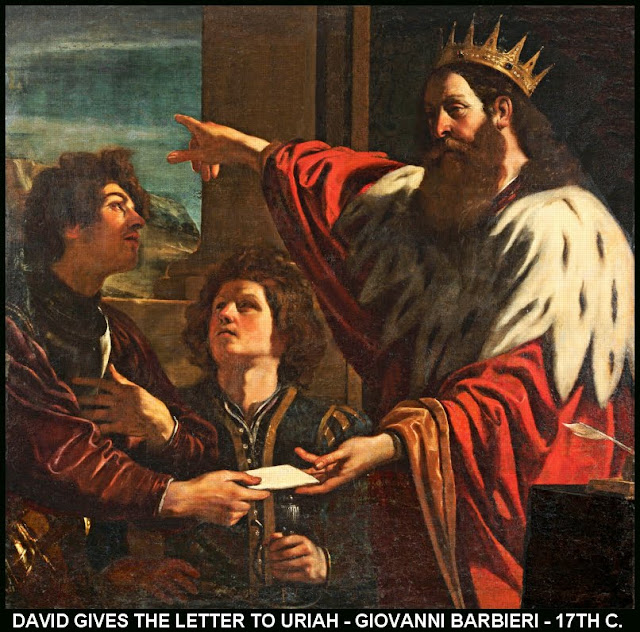 16So while Joab had the city under siege, he put Uriah at a place where he knew the strongest defenders were. 17When the men of the city came out and fought against Joab, some of the men in David’s army fell; moreover, Uriah the Hittite died.

18Joab sent David a full account of the battle. 19He instructed the messenger: “When you have finished giving the king this account of the battle, 20the king’s anger may flare up, and he may ask you, ‘Why did you get so close to the city to fight? Didn’t you know they would shoot arrows from the wall? 21Who killed Abimelek son of Jerub-Beshethb ? Didn’t a woman drop an upper millstone on him from the wall, so that he died in Thebez? Why did you get so close to the wall?’ If he asks you this, then say to him, ‘Moreover, your servant Uriah the Hittite is dead.’ ”

22The messenger set out, and when he arrived he told David everything Joab had sent him to say. 23The messenger said to David, “The men overpowered us and came out against us in the open, but we drove them back to the entrance of the city gate. 24Then the archers shot arrows at your servants from the wall, and some of the king’s men died. Moreover, your servant Uriah the Hittite is dead.”

25David told the messenger, “Say this to Joab: ‘Don’t let this upset you; the sword devours one as well as another. Press the attack against the city and destroy it.’ Say this to encourage Joab.”

26When Uriah’s wife heard that her husband was dead, she mourned for him. 27After the time of mourning was over, David had her brought to his house, and she became his wife and bore him a son.

But the thing David had done displeased
The LORD.

He was about fifty years of age; had been reigning in Jerusalem upwards of twelve years; lived in a stately palace on Mount Zion; and possessed numerous sons and daughters, a splendid court and a powerful army. He had been "preserved whithersoever he went," subdued his enemies, and returned in triumph. His natural gifts and fervent piety (Psalm 24:4; Psalm 101:7) were even more extraordinary than his material prosperity; and he now stood on the pinnacle of human greatness and glory.

He stood at this elevation, he had closed a life hitherto (as far as was possible before Christianity) almost entirely spotless, and bequeathed to posterity a wholly unclouded memory, and the purest type of true royalty. But the ascent of the dizzy height is always attended by the possibility of a slip and then of a headlong fall.

Rising from the couch where he had indulged in his noonday siesta to an undue length, David forthwith ascended to the roof of his house. But that ascent of David, alas! was a prelude to his deplorable downfall. For he ascended only that he might fall, beholding thence, as from a watchtower, Bathsheba the wife of Uriah, and immediately becoming passionately enamored of her"


It was the turning point of his career, which was marked by a long series of calamities. And

“It is sad to think that the cup of life, alter being filled for him by GOD and made pure and sweet by previous suffering and self-restraint, should have been recklessly poured out by his own hand”