1David mustered the men who were with him and appointed over them commanders of thousands and commanders of hundreds. 2David sent out his troops, a third under the command of Joab, a third under Joab’s brother Abishai son of Zeruiah, and a third under Ittai the Gittite. The king told the troops, “I myself will surely march out with you.”

3But the men said, “You must not go out; if we are forced to flee, they won’t care about us. Even if half of us die, they won’t care; but you are worth ten thousand of us.a It would be better now for you to give us support from the city.”

4The king answered, “I will do whatever seems best to you.”

So the king stood beside the gate while all his men marched out in units of hundreds and of thousands.5The king commanded Joab, Abishai and Ittai, “Be gentle with the young man Absalom for my sake.” And all the troops heard the king giving orders concerning Absalom to each of the commanders.

6David’s army marched out of the city to fight Israel, and the battle took place in the forest of Ephraim.7There Israel’s troops were routed by David’s men, and the casualties that day were great—twenty thousand men. 8The battle spread out over the whole countryside, and the forest swallowed up more men that day than the sword.

9Now Absalom happened to meet David’s men. He was riding his mule, and as the mule went under the thick branches of a large oak, Absalom’s hair got caught in the tree. He was left hanging in midair, while the mule he was riding kept on going. 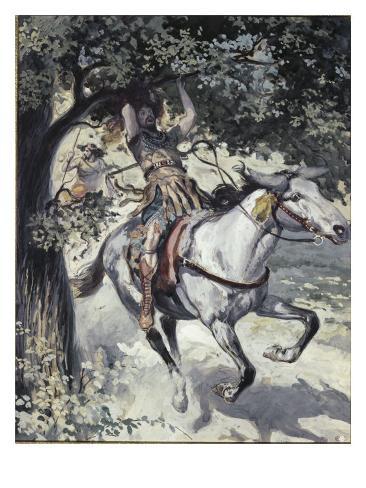 10When one of the men saw what had happened, he told Joab, “I just saw Absalom hanging in an oak tree.”

11Joab said to the man who had told him this, “What! You saw him? Why didn’t you strike him to the ground right there? Then I would have had to give you ten shekelsb of silver and a warrior’s belt.”

12But the man replied, “Even if a thousand shekels were weighed out into my hands, I would not lay a hand on the king’s son. In our hearing the king commanded you and Abishai and Ittai, ‘Protect the young man Absalom for my sake. ’ 13And if I had put my life in jeopardy —and nothing is hidden from the king—you would have kept your distance from me.”

14Joab said, “I’m not going to wait like this for you.” So he took three javelins in his hand and plunged them into Absalom’s heart while Absalom was still alive in the oak tree. 15And ten of Joab’s armor-bearers surrounded Absalom, struck him and killed him.

16Then Joab sounded the trumpet, and the troops stopped pursuing Israel, for Joab halted them. 17They took Absalom, threw him into a big pit in the forest and piled up a large heap of rocks over him. Meanwhile, all the Israelites fled to their homes.

18During his lifetime Absalom had taken a pillar and erected it in the King’s Valley as a monument to himself, for he thought, “I have no son to carry on the memory of my name.” He named the pillar after himself, and it is called Absalom’s Monument to this day.

19Now Ahimaaz son of Zadok said, “Let me run and take the news to the king that The LORD Has Vindicated him By Delivering him from the hand of his enemies.”

20“You are not the one to take the news today,” Joab told him. “You may take the news another time, but you must not do so today, because the king’s son is dead.”

21Then Joab said to a Cushite, “Go, tell the king what you have seen.” The Cushite bowed down before Joab and ran off.

22Ahimaaz son of Zadok again said to Joab, “Come what may, please let me run behind the Cushite.”

But Joab replied, “My son, why do you want to go? You don’t have any news that will bring you a reward.”

So Joab said, “Run!” Then Ahimaaz ran by way of the plainf and outran the Cushite.

24While David was sitting between the inner and outer gates, the watchman went up to the roof of the gateway by the wall. As he looked out, he saw a man running alone. 25The watchman called out to the king and reported it.

The king said, “If he is alone, he must have good news.” And the runner came closer and closer.

26Then the watchman saw another runner, and he called down to the gatekeeper, “Look, another man running alone!”

The king said, “He must be bringing good news, too.”

27The watchman said, “It seems to me that the first one runs like Ahimaaz son of Zadok.”

28Then Ahimaaz called out to the king, “All is well!” He bowed down before the king with his face to the ground and said, “Praise Be To The LORD your GOD! He Has Delivered Up those who lifted their hands against my lord the king.”

29The king asked, “Is the young man Absalom safe?”

Ahimaaz answered, “I saw great confusion just as Joab was about to send the king’s servant and me, your servant, but I don’t know what it was.”

30The king said, “Stand aside and wait here.” So he stepped aside and stood there.

31Then the Cushite arrived and said, “My lord the king, hear the good news! The LORD Has Vindicated you today by Delivering you from the hand of all who rose up against you.”

32The king asked the Cushite, “Is the young man Absalom safe?”

The Cushite replied, “May the enemies of my lord the king and all who rise up to harm you be like that young man.”

33The king was shaken. He went up to the room over the gateway and wept. As he went, he said:

My son, my son Absalom!

O My Son Absalom, If Only I Had Died Instead Of You!


How does David render good for evil! Absalom would have only David killed; David would have only Absalom spared. This seems to be a resemblance of man's wickedness towards GOD, and GOD'S Mercy to man. Now the Israelites see what it is to take counsel against The LORD and HIS anointed.

Let us look upon Absalom, hanging on a tree, accursed, forsaken of heaven and earth; there let them read The LORD'S Abhorrence of rebellion against parents. Nothing can preserve men from misery and contempt, but heavenly Wisdom and The Grace of GOD. 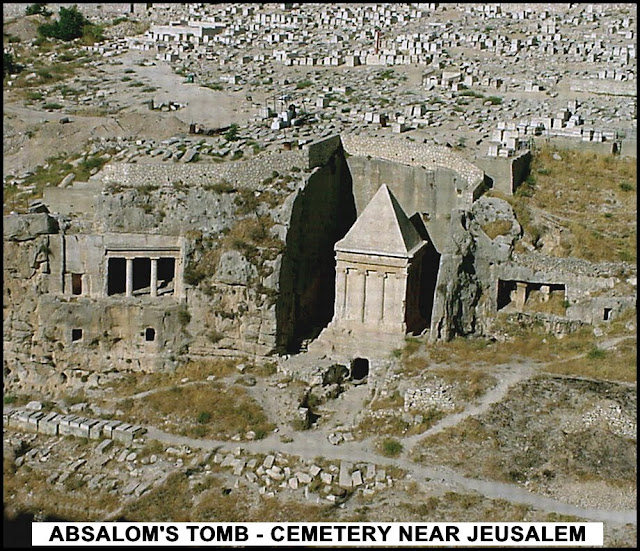