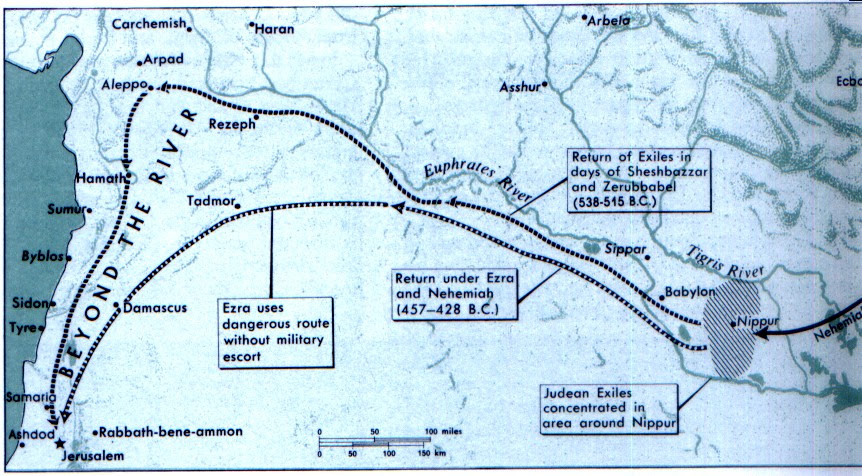 The People’s Confession of Sin

1While Ezra was praying and confessing, weeping and throwing himself down before the House of GOD, a large crowd of Israelites—men, women and children—gathered around him. They too wept bitterly. 2Then Shekaniah son of Jehiel, one of the descendants of Elam, said to Ezra, “We have been unfaithful to our GOD by marrying foreign women from the peoples around us. But in spite of this, there is still hope for Israel. 3Now let us make a covenant Before our GOD to send away all these women and their children, in accordance with the counsel of my lord and of those who fear the Commands of our GOD. Let it be done according to the Law. 4Rise up; this matter is in your hands. We will support you, so take courage and do it.”

5So Ezra rose up and put the leading priests and Levites and all Israel under oath to do what had been suggested. And they took the oath. 6Then Ezra withdrew from before the House of GOD and went to the room of Jehohanan son of Eliashib. While he was there, he ate no food and drank no water, because he continued to mourn over the unfaithfulness of the exiles.

7A proclamation was then issued throughout Judah and Jerusalem for all the exiles to assemble in Jerusalem. 8Anyone who failed to appear within three days would forfeit all his property, in accordance with the decision of the officials and elders, and would himself be expelled from the assembly of the exiles.

9Within the three days, all the men of Judah and Benjamin had gathered in Jerusalem. And on the twentieth day of the ninth month, all the people were sitting in the square before the House of GOD, greatly distressed by the occasion and because of the rain. 10Then Ezra the priest stood up and said to them, “You have been unfaithful; you have married foreign women, adding to Israel’s guilt. 11Now honora The LORD, The GOD of your ancestors, and do HIS Will. Separate yourselves from the peoples around you and from your foreign wives.”

12The whole assembly responded with a loud voice: “You are right! We must do as you say. 13But there are many people here and it is the rainy season; so we cannot stand outside. Besides, this matter cannot be taken care of in a day or two, because we have sinned greatly in this thing. 14Let our officials act for the whole assembly. Then let everyone in our towns who has married a foreign woman come at a set time, along with the elders and judges of each town, until The Fierce Anger of our GOD in this matter Is Turned Away from us.” 15Only Jonathan son of Asahel and Jahzeiah son of Tikvah, supported by Meshullam and Shabbethai the Levite, opposed this.

Those Guilty of Intermarriage


18Among the descendants of the priests, the following had married foreign women:

From the descendants of Joshua son of Jozadak, and his brothers: Maaseiah, Eliezer, Jarib and Gedaliah. 19(They all gave their hands in pledge to put away their wives, and for their guilt they each presented a ram from the flock as a guilt offering.)

25And among the other Israelites:

44All these had married foreign women, and some of them had children by these wives.c


The case is sad, but it is not desperate; the disease threatening, but not incurable. Now that the people begin to lament, a spirit of repentance seems to be poured out; now there is hope that GOD Will Forgive, and Have Mercy.

The sin that rightly troubles us shall not ruin us. In troubled times we must observe what makes for us, as well as against us. And there may be good hopes through grace even where there is the sense of great guilt Before GOD.

The case is plain; what has been done wrong must be undone again as far as possible. Nothing less than this is true repentance. Sin must be put away, with a resolution never to have anything more to do with it. What has been unjustly done must be restored. Weeping, in this case, is good but reforming is better. As to being unequally yoked with unbelievers, such marriages ought not to be made.

There is hope concerning people, when they are convinced, not only that it is good to part with their sins, but that it is necessary; we must do it, or we are undone. There is hope for the sinners who hear the Gospel, and are willing to accept the free salvation. When sinners mourn for their sins, and tremble at The WORD of GOD, there is hope that they will forsake them.

When The REDEEMER HIMSELF Shall Come To Zion, HE

Shall Effectually Turn Away ungodliness from Jacob.

And when sin is repented of and forsaken, GOD Will Forgive it by the Blood of CHRIST, our Sin-Offering, Which Is The Only Atonement That takes Away our guilt. No repentance will benefit those who reject HIM, for self-dependence proves them still to be unrepentant.

All the names written in the Book of Life, are those of penitent

sinners, not of self-righteous persons, who think they have no

need of repentance and remission of their sins.

“I Tell you that in the same way there will be more rejoicing in heaven over one sinner who repents than over ninety-nine righteous persons who do not need to repent.”