Opposition to the Rebuilding


1When the enemies of Judah and Benjamin heard that the exiles were building a Temple For The LORD, The GOD of Israel, 2they came to Zerubbabel and to the heads of the families and said, “Let us help you build because, like you, we seek your GOD and have been sacrificing to HIM since the time of Esarhaddon king of Assyria, who brought us here.” 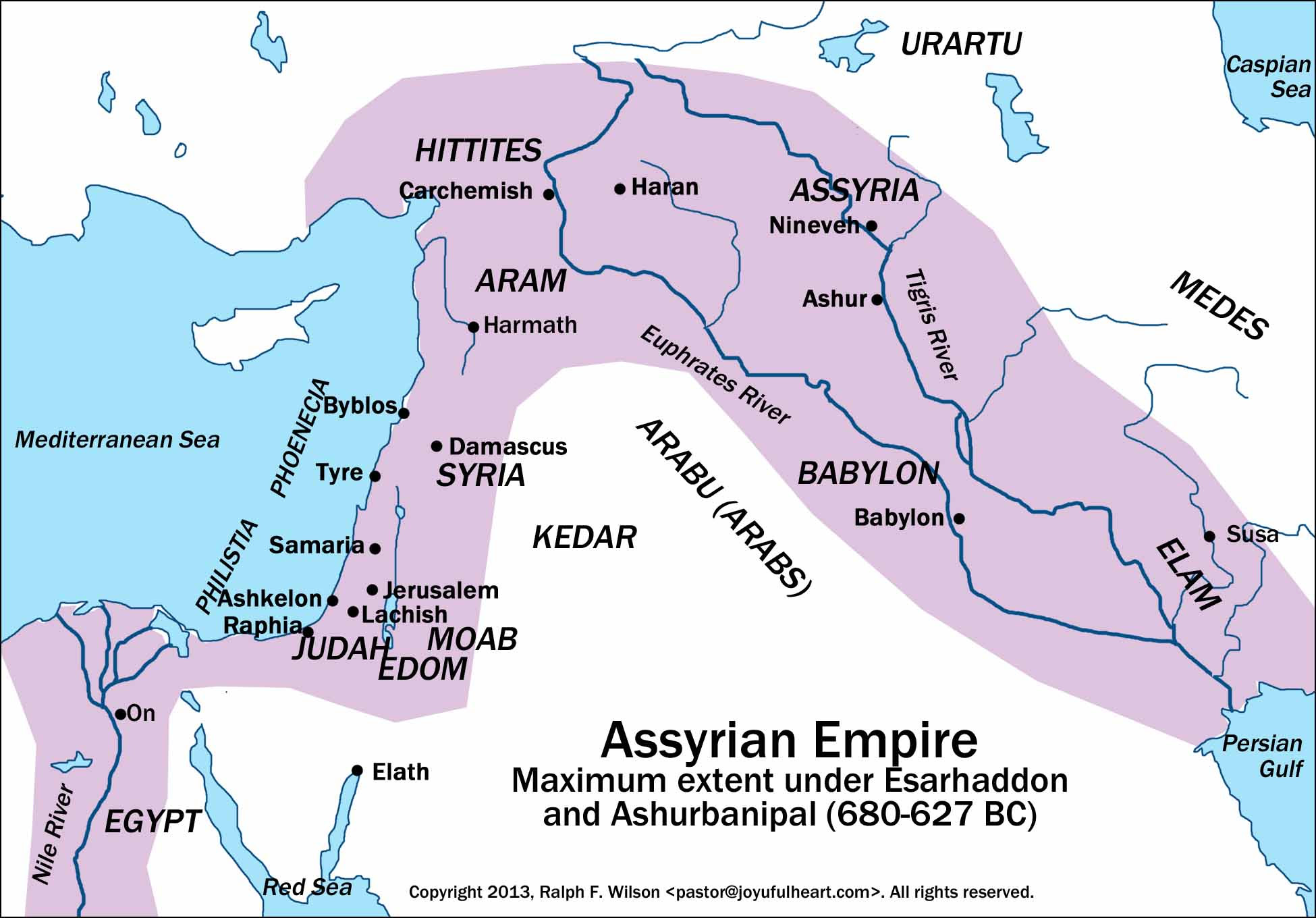 3But Zerubbabel, Joshua and the rest of the heads of the families of Israel answered, “You have no part with us in building a Temple to our GOD. We alone will build it For The LORD, The GOD of Israel, as King Cyrus, the king of Persia, commanded us.”

4Then the peoples around them set out to discourage the people of Judah and make them afraid to go on building.a 5They bribed officials to work against them and frustrate their plans during the entire reign of Cyrus king of Persia and down to the reign of Darius king of Persia.


Later Opposition Under Xerxes and Artaxerxes

6At the beginning of the reign of Xerxes,b they lodged an accusation against the people of Judah and Jerusalem.

7And in the days of Artaxerxes king of Persia, Bishlam, Mithredath, Tabeel and the rest of his associates wrote a letter to Artaxerxes. The letter was written in Aramaic script and in the Aramaic language.c d

8Rehum the commanding officer and Shimshai the secretary wrote a letter against Jerusalem to Artaxerxes the king as follows:

9Rehum the commanding officer and Shimshai the secretary, together with the rest of their associates—the judges, officials and administrators over the people from Persia, Uruk and Babylon, the Elamites of Susa, 10and the other people whom the great and honorable Ashurbanipal deported and settled in the city of Samaria and elsewhere in Trans-Euphrates.

11(This is a copy of the letter they sent him.)

From your servants in Trans-Euphrates:

12The king should know that the people who came up to us from you have gone to Jerusalem and are rebuilding that rebellious and wicked city. They are restoring the walls and repairing the foundations.

17The king sent this reply:

To Rehum the commanding officer, Shimshai the secretary and the rest of their associates living in Samaria and elsewhere in Trans-Euphrates:

18The letter you sent us has been read and translated in my presence. 19I issued an order and a search was made, and it was found that this city has a long history of revolt against kings and has been a place of rebellion and sedition. 20Jerusalem has had powerful kings ruling over the whole of Trans-Euphrates, and taxes, tribute and duty were paid to them. 21Now issue an order to these men to stop work, so that this city will not be rebuilt until I so order. 22Be careful not to neglect this matter. Why let this threat grow, to the detriment of the royal interests?

23As soon as the copy of the letter of King Artaxerxes was read to Rehum and Shimshai the secretary and their associates, they went immediately to the Jews in Jerusalem and compelled them by force to stop. 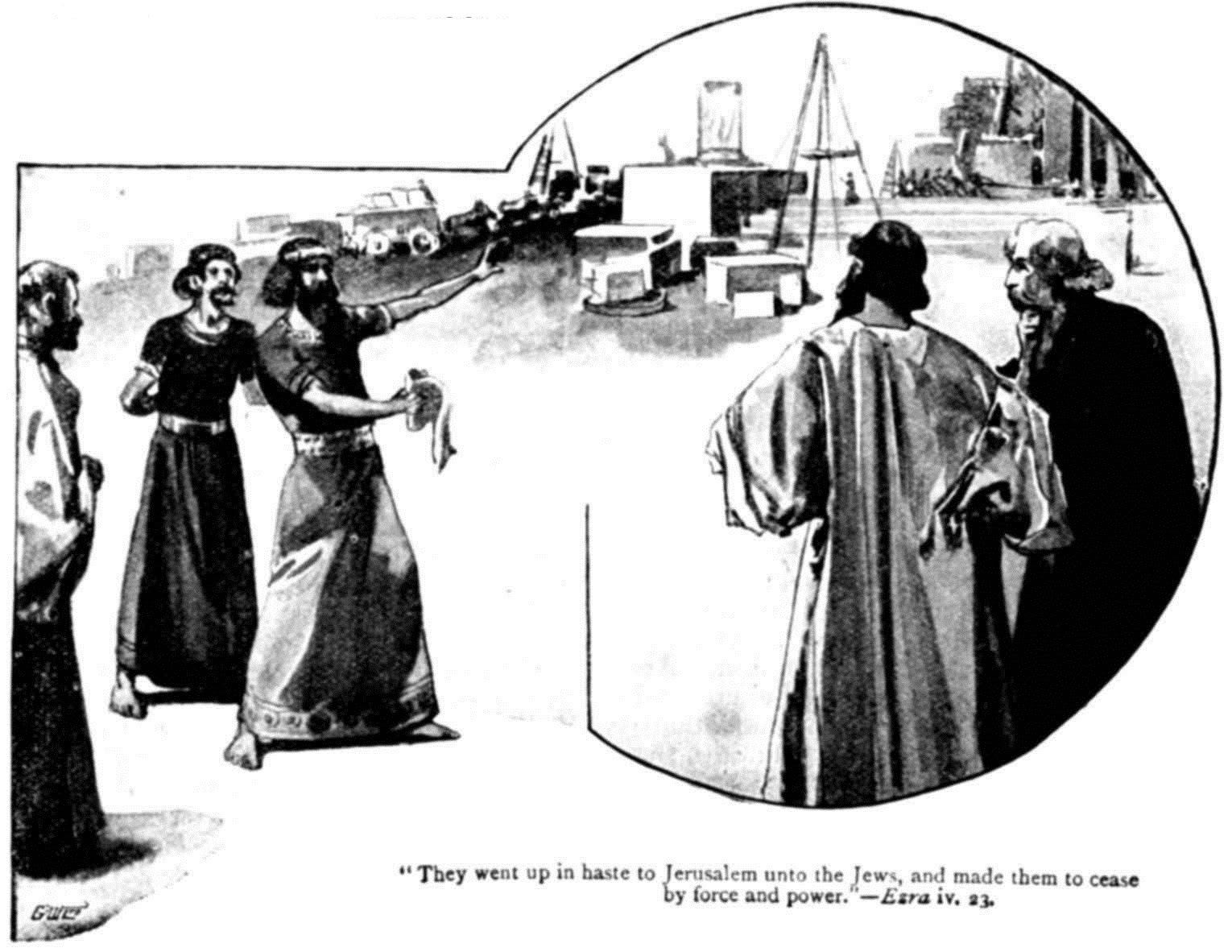 24 Thus the work on the House of GOD in Jerusalem came to a standstill until the second year of the reign of Darius king of Persia.


Every attempt to revive true worship of JEHOVAH will stir up the opposition of Satan, and of those in whom he works. The adversaries were the Samaritans, who had been planted in the land of Israel, 2 Kings 17. It was plain that they did not mean to unite in the worship of JEHOVAH, but to discourage the good work of building the House of GOD, the church of CHRIST.

It is a slander that the prosperity of the church would be hurtful to kings and princes. Nothing can be more false than this, for true godliness teaches us to honor and obey our sovereign.

But where the Command of GOD Requires one thing and the law of the land another, we must obey GOD rather than man, and patiently submit to the consequences. All who love the Gospel should avoid all appearance of evil, lest they should encourage the adversaries of the church. The world is ever ready to believe any accusation against the people of GOD, and refuses to listen to them.