1 On another day the angelsa came to present themselves Before The LORD, and satan also came with them to present himself Before HIM. 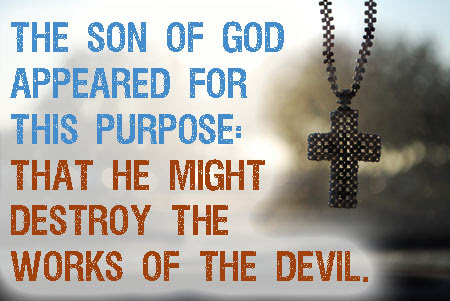 2And The LORD Said to satan,

“Where have you come from?”

“From roaming throughout the earth, going back and forth on it.”

3Then The LORD Said to satan,


“Have you considered my servant Job? There is no

one on earth like him; he is blameless and upright, a

man who fears GOD and shuns evil. And he still

maintains his integrity, though you incited ME against

him to ruin him without any reason.”


“A man will give all he has for his own life.

5But now Stretch Out YOUR Hand and Strike his flesh and bones, and he will surely curse YOU To YOUR Face.”

6The LORD said to satan,

“Very well, then, he is in your hands; but you must

7So satan went out from the Presence of The LORD and afflicted Job with painful sores from the soles of his feet to the crown of his head. 8Then Job took a piece of broken pottery and scraped himself with it as he sat among the ashes. 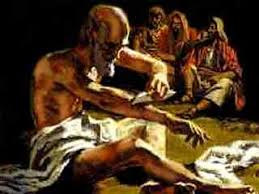 9His wife said to him, “Are you still maintaining your integrity? Curse GOD and die!” 10He replied, “You are talking like a foolishb woman. Shall we accept good From GOD, and not trouble?”

In all this, Job did not sin in what he said.

11When Job’s three friends, Eliphaz the Temanite, Bildad the Shuhite and Zophar the Naamathite, heard about all the troubles that had come upon him, they set out from their homes and met together by agreement to go and sympathize with him and comfort him.12When they saw him from a distance, they could hardly recognize him; they began to weep aloud, and they tore their robes and sprinkled dust on their heads. 13Then they sat on the ground with him for seven days and seven nights. No one said a word to him, because they saw how great his suffering was.

Satan also came with them to present himself Before The LORD

This does not occur in the former statement in Job 1:6. It here means that he came Before The LORD after he had had permission to afflict; Job. The Chaldee renders it "that he might stand in judgment דין dı̂yn Before The LORD."

These seasons are represented as periodical, when the angels came, as it were, to make report to GOD of what they had observed and done. The Chaldee renders this, "And there was a day of the great judgment (רבא דינא יום yôm dı̂ynā' rābā'), a day of the remission of sins (שבוק יום סרחניא) and there came bands (כתי) of angels."

We left Job honorably acquitted upon a fair trial between GOD and satan concerning him. Satan had leave to touch, to touch and take, all he had, and was confident that he would then curse GOD to HIS Face; but, on the contrary, he blessed HIM, and so he was proved an honest man and satan a false accuser. Now, one would have thought, this would be conclusive, and that Job would never have his reputation called in question again; but Job is known to be armor of proof, and therefore is here set up for a mark, and brought upon his trial, a second time.

I. Satan moves for another trial, which should touch his bone and his flesh (v. 1-5).

III. Satan smites him with a very painful and loathsome disease (v. 7, 8).

And in this that good man is set forth for an example of suffering affliction and of patience.

Satan (Hebrew: שָּׂטָן satan, meaning "adversary"; Arabic: شيطان shaitan, meaning; "astray", "distant", or sometimes "devil") is a figure appearing in the texts of the Abrahamic religions who brings evil and temptation, and is known as the deceiver who leads humanity astray.

Some religious groups teach that he originated as an angel who fell out of favor with GOD, seducing humanity into the ways of sin, and who has power in the fallen world. In the Hebrew Bible and the New Testament, Satan is primarily an accuser and adversary, a decidedly malevolent entity, also called the devil, who possesses demonic qualities.

Who Is satan?: What Does the Bible Say About the devil?

According to the Barna Group, the majority of Christians do not believe that satan or the devil actually exists. However, according to an AP-AOL news poll, up to 97% of evangelical Christians believe that angels exist.3 Contrary to the beliefs of many, satan is not the opposite of GOD—an anti-god. According to the Bible, satan is a created being, having been created by GOD as His most powerful angelic helper. So, satan is an angel who rebelled against GOD.

The Bible says that satan was created by GOD as a cherub, the most powerful of GOD'S angelic beings.4 Some time after his creation and before the creation of mankind,5 satan rebelled against GOD and took one third of the angels (now referred to as demons) with him into rebellion.6

No, satan does not look like the cartoon character in the red suit with a tail and horns and a pitchfork. Contrary to the beliefs of some Christians, Barak Obama is not satan. Angels, including satan, don't have male or female characteristics in their heavenly state (which JESUS told us through HIS teaching7). However, when they come to earth, they can take on human form. In the Bible, all angels who take on human form appear as males. All biblical references address satan by the personal pronoun "he."

However, in their heavenly state according to the Bible, a cherub is a large creature—up to 18 feet in height8 with 8 foot long wings.9 In the prophet Ezekiel's vision, the cherubim (plural of "cherub") had four wings.10 Under their wings were human-like hands that could could be used to carry things.10 All the surfaces of the cherubim, including the wings, were covered with eyes.11 Each cherub had four faces, one "of a cherub, the second the face of a man, the third the face of a lion, and the fourth the face of an eagle."12 The New Testament book of Revelation describes similar creatures, only with six wings each, with faces of a lion, an ox, a man, and an eagle.13 So, these creatures look nothing like the cute little cherubim you can buy for your garden or bookshelf. Satan himself is described as being "perfect in beauty," being adorned with all kinds of precious stones.4

The fall of satan

satan was created as a perfect being. He is described as originally being wise and completely righteous.4 However, pride caused satan to fall, ("your heart was lifted up because of your beauty"),4 since he wanted to receive the worship due to GOD alone.14 At that point there was rebellion in heaven, when satan convinced one third of the angels to rebel against GOD.15 Michael, an archangel of GOD, fought with GOD'S angels against satan and his angels, with satan losing the battle and being cast from heaven down to earth.15 It isn't certain when satan rebelled against GOD, but a passage from the book of Job (Job 38:4-7) suggests it occurred between the creation of the earth and the creation of Adam and Eve. In describing the creation of the earth to Job and his friends, GOD Said that "all the sons of GOD shouted for joy."16 Presumably, "all the sons of GOD" would have included satan as well, suggesting he hadn't rebelled at the point the earth was created.


However, satan wasn't finished in his rebellion against GOD. satan took on the form of a snake in the garden of Eden to tempt Eve.4, 15He managed to convince Eve that GOD'S instructions against eating from the tree of the knowledge of good and evil were done as a way of keeping something good from her. She believed Satan's lie that she would "become like GOD."17 We don't know where Adam was at the time of Satan's temptation, but he followed his wife's lead and also disobeyed GOD'S instructions.

satan continues in his rebellion today, since he hates GOD and HIS plans. He wants people to worship him and follow his evil ways. He opposes JESUS CHRIST—GOD WHO Took On the form of a man to Redeem humanity from their sin,18 and Restore their relationship with HIM. A comparison between JESUS and satan is given in the table below.

The Bible says that satan will continue in his rebellion against GOD until the very end. Near the end, a "beast" (world ruler) will arise from the "sea" (the gentile nations), having been given power by satan to perform signs and wonders for the world.28 In addition, a false prophet, a religious leader empowered by satan will deceive people into worshiping him.29 The beast and the false prophet will convince the leaders of the earth to follow them into war against GOD and HIS people.30 However, the armies of the leaders of the world will be destroyed at the battle of Armageddon and the beast and false prophet will be thrown into the Lake of Fire.31

At this point, Satan will be locked up for 1,000 years,32 while JESUS CHRIST Rules the earth with HIS saints.33 At the end of that period, satan is released for a short period of time, deceives the leaders of the world again, and convinces them to attack JESUS and HIS Rule on the earth.34 The battle is short as fire from heaven consumes the rebels. satan is then thrown into the Lake of Fire (hell) to "be tormented day and night for ever and ever."34 Following Satan's demise, the saints of JESUS CHRSIT will judge the angels who joined him in rebellion.35

The apostle John says that believers can overcome satan when "The WORD of GOD abides in you."36 When JESUS was Tempted by satan, HE Cited scripture to him (Matthew 4:1-1037). In addition, Paul tells us that the Sword of The SPIRIT, which is the WORD of GOD, Is our only offensive weapon against the satan (Ephesians 6:13-1738). In the parable of the sower, JESUS Said that there were those who heard The WORD of GOD, but failed to take it in, and so were led astray by the devil (the seed that fell by the side of the road).39 So Christians resist the devil by knowing and memorizing scripture so that we cannot be deceived by the lies of Satan.22 The Bible gives believers the following instructions about resisting the devil:

Satan is often comically portrayed as a guy in a red devil suit. He probably likes it this way, since most people (including Christians) are apt to disbelieve in his existence. As a "non-existent" force in people's lives, satan is free to influence them without being discovered as the cause of many of their problems. However, the Bible says that satan is a beautiful and powerful fallen angel, who would like to do nothing more than take away the joy of Christians through deception, and lead people into rebellion against GOD. Although satan is destined for the Lake of Fire, biblical prophecy indicates that he will deceive entire nations and kingdoms before he is relegated to eternal damnation, along with the other fallen angels he led into rebellion against GOD.


"I saw satan fall like lightning from heaven. I have given you authority to trample on snakes and scorpions and to overcome all the power of the enemy; nothing will harm you. However, do not rejoice that the spirits submit to you, but rejoice that your names are written in heaven."