Job 24 - The ALMIGHTY GOD Set Times For Judgment By JESUS


1“Why Does The ALMIGHTY Not Set times for Judgment?

Why must those who know HIM look in vain for such

2There are those who move boundary stones;
they pasture flocks they have stolen.
3They drive away the orphan’s donkey
and take the widow’s ox in pledge.
4They thrust the needy from the path
and force all the poor of the land into hiding.
5Like wild donkeys in the desert,
the poor go about their labor of foraging food;
the wasteland provides food for their children.
6They gather fodder in the fields
and glean in the vineyards of the wicked.
7Lacking clothes, they spend the night naked;
they have nothing to cover themselves in the cold.
8They are drenched by mountain rains
and hug the rocks for lack of shelter.
9The fatherless child is snatched from the breast;
the infant of the poor is seized for a debt.
10Lacking clothes, they go about naked;
they carry the sheaves, but still go hungry. 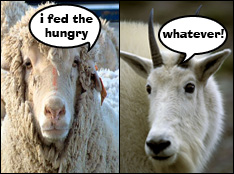 11They crush olives among the terracesa ;
they tread the winepresses, yet suffer thirst.
12The groans of the dying rise from the city,
and the souls of the wounded cry out for help.
But GOD Charges no one with wrongdoing.
13“There are those who rebel against the light,
who do not know its ways
or stay in its paths.
14When daylight is gone, the murderer rises up,
kills the poor and needy,
and in the night steals forth like a thief.
15The eye of the adulterer watches for dusk;
he thinks, ‘No eye will see me,’
and he keeps his face concealed.
16In the dark, thieves break into houses,
but by day they shut themselves in;
they want nothing to do with the light.
17For all of them, midnight is their morning;
they make friends with the terrors of darkness.
18“Yet they are foam on the surface of the water;
their portion of the land is cursed,
so that no one goes to the vineyards.
19As heat and drought snatch away the melted snow,
so the grave snatches away those who have sinned.
20The womb forgets them,
the worm feasts on them;
the wicked are no longer remembered
but are broken like a tree.

21They prey on the barren and childless woman,
and to the widow they show no kindness.
22But GOD Drags away the mighty by HIS Power;
though they become established, they have no assurance of life.
23HE May Let them rest in a feeling of security,
but HIS Eyes Are on their ways.
24For a little while they are exalted, and then they are gone;
they are brought low and gathered up like all others;
they are cut off like heads of grain.
25“If this is not so, who can prove me false
and reduce my words to nothing?”


Job having by his complaints in the foregoing chapter given vent to his passion, and thereby gained some ease, and now applies himself to a further discussion of the doctrinal controversy between him and his friends concerning the prosperity of wicked people.  That many live at ease who are ungodly and profane, and despise all the exercises of devotion, he had shown, chapter 21.

Now here he goes further, and shows that many who are mischievous to mankind, and live in open defiance to all the laws of justice and common honesty, yet thrive and succeed in their unrighteous practices; and we do not see them reckoned with in this world. What he had said before (chapter 12:6), "The tabernacles of robbers prosper," he here enlarges upon.

He lays down his general proposition (v. 1), that the punishment of wicked people is not so visible and apparent as his friends supposed, and then proves it by an induction of particulars.