A shiggaionb of David, which he sang to The LORD concerning Cush, a Benjamite.

1LORD my GOD
I take refuge In YOU;
Save and Deliver me from all who pursue me, 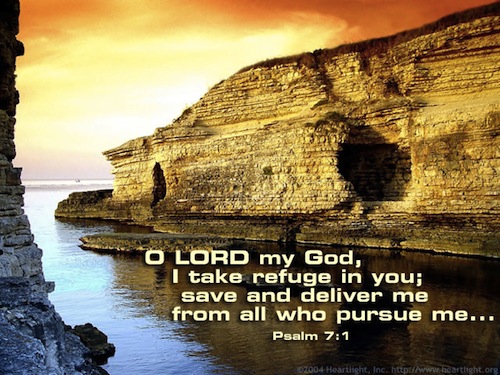 2or they will tear me apart like a lion
and rip me to pieces with no one to rescue me.

3LORD my GOD, if I have done this
and there is guilt on my hands—

5then Let my enemy pursue and overtake me;
Let him trample my life to the ground
and make me sleep in the dust.c

6Arise, LORD, In YOUR Anger;
Rise Up Against the rage of my enemies.
Awake, my GOD; Decree Justice.

7Let the assembled peoples gather Around YOU,
while YOU Sit Enthroned Over them on high.

9Bring to an end the violence of the wicked
and Make the righteous secure—
YOU, the Righteous GOD
WHO Probes minds and hearts.

10My shield Is GOD MOST HIGH,
WHO Saves the upright in heart.

11GOD Is a Righteous Judge,
A GOD WHO Displays HIS Wrath every day.

12If he does not relent,
HE Will Sharpen HIS Sword;
HE Will Bend and String HIS bow.

13HE Has Prepared HIS Deadly Weapons;
HE Makes Ready HIS Flaming Arrows.

14Whoever is pregnant with evil
conceives trouble and gives birth to disillusionment.

15Whoever digs a hole and scoops it out
falls into the pit they have made.

16The trouble they cause recoils on them;
their violence comes down on their own heads.

17I will give Thanks To The LORD because of HIS Righteousness;
I will sing the Praises of The Name of The LORD MOST HIGH.

JEHOVAH my GOD - Words יְהוָ֣ה  אֱ֭לֹהַי Yehovah Elohai  are expressive of the strongest confidence man can have in the Supreme Being. Thou Self-Existent, Incomprehensible, Almighty, and Eternal Being, WHO neither Needs nor Hates anything that Thou Have Made.  YOU Are my GOD: GOD in covenant with man, therefore, in YOU I put my trust.

It appears by the title that this Psalm was penned with a particular reference to the malicious accusations that David was unjustly laid under by some of his enemies.

II. He appeals to GOD concerning his innocence as to those things whereof he was accused (v. 3-5).

III. He prays to GOD to plead his cause and judge for him against his persecutors (v. 6-9).

IV. He expresses his confidence in GOD that HE Would Do so, and would return the mischief upon the head of those that designed it against him (v. 10-16).

V. He promises to give GOD the Glory of his deliverance (v. 17).

In this, David was a type of CHRIST WHO Was Falsely Accused, but Was Vindicated at last.